NASA says dirty laundry practices in space are on the nose Astronaut gear gets a serious workout aboard the International Space Station. Picture: NASA

Ever wondered how astronauts do laundry in space? Well, they don’t. They wear their underwear, gym clothes and everything else until they can’t take the filth and stink anymore, then they toss them.

But NASA wants to stop stuffing dirty laundry into bins aboard the International Space Station (ISS), destined to burn up in the atmosphere aboard discarded cargo ships, thereby throwing away tonnes of garments every year. NASA is now figuring out how best to clean astronauts’ clothes in space so they can be reused for months or even years, just like on Earth.

A couple of detergent and stain removal experiments will take place aboard the International Space Station later this year and next as part of the galactic* battle against soiled* and sweaty clothes. 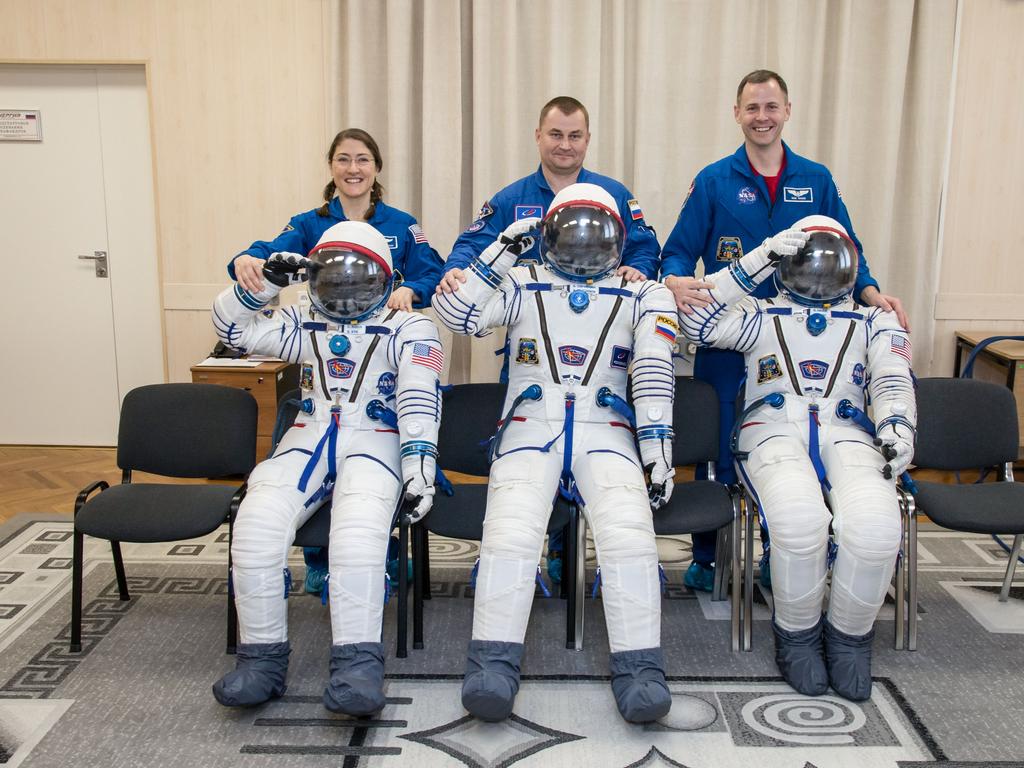 Expedition 59 crew members from left Christina Koch, Alexey Ovchinin of Roscosmos and Nick Hague share a playful moment with their Sokol launch and entry suits. Astronauts have a variety of uniforms for different jobs they perform in space but no way of cleaning them. Picture: NASA/Victor Zelentsov

Everyone knows aliens love underpants, thanks to the popular children’s book of the same name, but in reality space laundry is no small problem, especially as the US and other countries look to establish bases on the Moon and Mars.

Rocket cargo space is tight and expensive, according to NASA, so why waste it on new outfits if astronautic clothing could be kept looking and smelling fresh? When you figure an astronaut needs approximately 68 kilograms of clothes in space per year, that quickly adds up, especially on a three-year Mars mission, said Mark Sivik, a chemist specialising in fabric and home care technology.

Space station astronauts exercise two hours every day to counter the muscle- and bone-withering* effects of weightlessness, quickly leaving their workout clothes sweaty, smelly and stiff. Their T-shirts, shorts and socks end up so foul that they run through a pair every week, according to Leland Melvin, a former NASA astronaut and NFL player.

“After that, they’re deemed toxic,” said Melvin, who’s serving as a spokesman for the project. “They, like, have a life of their own. They’re so stiff from all that sweat.” Astronauts have to exercise a minimum of two hours daily while stationed aboard the International Space Station, to minimise the risk of muscle atrophy. But until now there has been no way to clean their gym gear. Picture: NASA

While NASA and the other space station partners have looked into special antimicrobial* clothes to prolong wear, it’s not a long-term solution.

In the initial experiment this coming December, detergent custom-made for space will be tested so scientists can see how the enzymes* and other ingredients react to six months of weightlessness. Next May, stain-removal pens and wipes will be delivered for testing by astronauts.

At the same time, a washer-dryer combo is being tested that could operate on the Moon or even Mars, using minimal amounts of water and detergent. Such a machine could also prove useful in arid regions here on Earth. 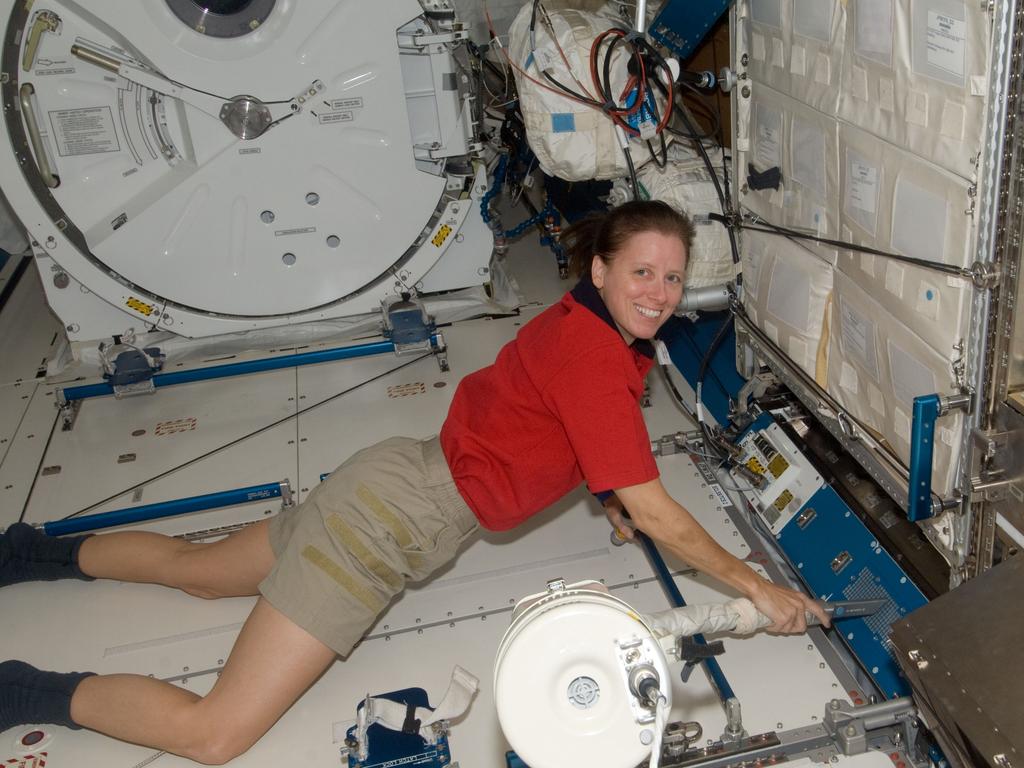 In 2010, NASA astronaut Shannon Walker, Expedition 24 flight engineer, used a vacuum cleaner during housekeeping operations in the Kibo laboratory of the International Space Station, but astronauts are still waiting for a washing machine. Picture: NASA

Astronauts have conducted earlier laundry experiments while aboard the ISS. A 2003 issue of the NASAexplores journal featured then-science officer Don Pettit, who decided to try growing tomato and basil seeds. Since there was no soil, he had to figure out another way to grow the plants. In his Space Chronicles, Pettit wrote: “To construct my planter, a spherical core is needed. An old pair of underwear worked well. We have supplies on Station sufficient to change our underwear perhaps once every three to four days, so I figured there might be a few nutrients in there as well.

“An old pair of underwear was folded into a sphere and held in place with a few well-placed stitches using needle and thread.”

For the outside of the planter, he sewed Russian space toilet paper to the outer surface of the underwear and said “it works very well for its intended purpose.”

After a couple of changes, Pettit’s seeds sprouted in the underwear/toilet paper planter within two days.

Fast forward to 2021 and one enduring* design challenge aboard the ISS is that any water used in the planned dirty laundry drive needs to be reclaimed for drinking and cooking. Urine and sweat are already recycled, because in space every drop of water really counts.

CLASSROOM ACTIVITIES
1. Write a Diary Entry
List some of the other day-to-day problems you think astronauts would face living in space for long periods of time.

2. Extension
Astronaut Don Pettit’s underwear/toilet paper planter was a great way for astronauts to use or up-cycle their dirty clothes into something useful. Can you think of another way that a dirty or used item of clothing could be up-cycled into something else to be used in a space ship? Write a step-by-step guide to making your new item.