A NASA space telescope has captured the most detailed photos of the Sun ever taken.

The images reveal spots on the Sun’s surface that are filled with hot plasma* strands.

The images also show that the Sun’s atmosphere is much more complex than previously thought.

They were taken by the NASA High-Resolution Coronal Imager (Hi-C) space-based telescope.

Researchers from the University of Central Lancashire in the UK, and NASA’s Marshall Space Flight Centre then studied the photos.

They found that sections of the Sun’s atmosphere previously thought to be dark or empty are actually filled with strands of hot electrified plasma.

Each strand is said to be up to almost 1 million degrees Celsius and many hundreds of kilometres long. 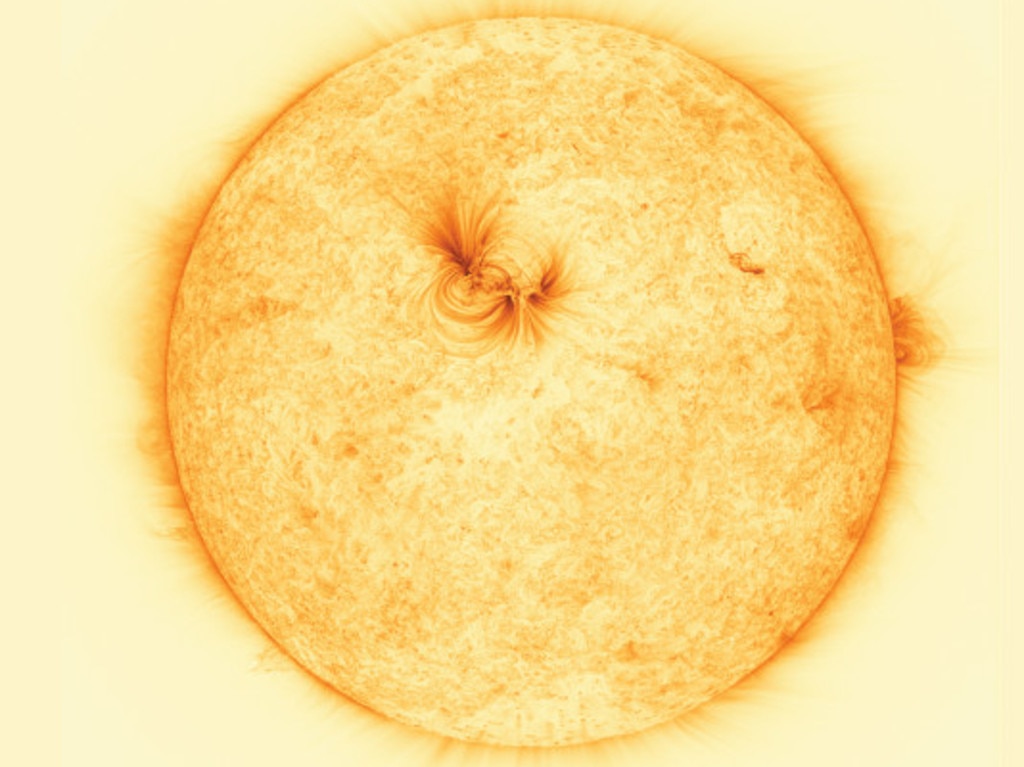 The solar flare is visible near the centre of this photo. Picture: NASA/UCLan

The telescope that captured the images was carried into space on a suborbital* rocket.

It then captured an image of the Sun every second before returning to Earth.

NASA’s Dr Amy Winebarger, the telescope’s principal investigator said: “These new Hi-C images give us a remarkable insight into the Sun’s atmosphere.

“Along with (other) ongoing missions, this fleet of space-based instruments in the near future will reveal the Sun’s dynamic* outer layer in a completely new light.”

Future research will now look into how the strands are formed and what their presence means.

They could also provide a better understanding about how the Sun relates to the Earth.

University researcher Tom Williams, who worked on the Hi-C project, said it was a fascinating discovery.

“This … could better inform our understanding of the flow of energy through the layers of the Sun and eventually down to Earth itself,” he said.

“This is so important if we are to model and predict the behaviour of our life-giving star.”

Robert Walsh, professor of solar physics at the university, added: “Until now, solar astronomers have effectively been viewing our closest star in ‘standard definition’.

“The exceptional quality of the data provided by the Hi-C telescope allows us to survey a patch of the Sun in ‘ultra-high definition’ for the first time.”

The study has been published in the Astrophysical Journal. A man looks at the setting sun near Hanover, northern Germany. From Earth, we can’t see any detail of the active surface of Earth’s star. Picture: AFP

First-ever close up of the Sun

CLASSROOM ACTIVITIES
1. Building scientific knowledge
Scientific research, such as the photographs taken by NASA of the Sun, help humans to continually build upon our scientific knowledge. As new research is done we can confirm or reject existing theories, make new conclusions and form questions for future research.

Make a flow chart with three boxes labelled Before, Now and Future. Carefully read through the article and add more detail to your flow chart by explaining what we thought about spots on the Sun before the Hi-C photos were taken, what we now know, and what scientists are hoping to find out in the future.

2. Extension
The words “life-giving star” are used in the news story. Write a short paragraph to explain what is meant by this.

HAVE YOUR SAY: What thing in space would you like to see close up?
No one-word answers. Use full sentences to explain your thinking. No comments will be published until approved by editors.