These 3D-printed towers may be used by NASA to house its astronauts on Mars. Picture: NASA

NASA has unveiled designs for 3D-printed* towers that could shelter the first humans on Mars.

Each of the striking structures include living spaces as well as a science laboratory for experiments.

And the designs could be useful sooner than we all hoped, with a re-examination of information from 2013 from the Mars Express orbiter showing it recorded a burp of methane gas coming from Mars.

Methane is a promising sign of the possibility of life because of its links to biological* activity on Earth.

The Mars tower houses were designed by the winners of NASA’s 3D-Printed Habitat* Challenge.

The competition tasked teams to submit designs for a habitat that could one day house the first astronauts on Mars.

First place was taken by a team called ‘SEArch+/Apis Cor’, from New York, US.

Their twisted, tower-like ‘Mars X House’ — which exists only as digital drawings for now — can be upgraded with 3D-printed add-ons. The Mars X House design, which took first place in the latest round of Nasa’s Habitat Challenge. Picture: NASA

The team’s plan involves multiple Mars X Houses being built on Mars by AI*-powered robots before humans arrive to live in them.

“It forms a pioneering and durable* habitat supporting future human missions to Mars.” Robot rovers (top left) would reach the planet on AI-driven spacecraft (main image) to build the houses ahead of the arrival of astronauts. Picture: NASA

Astronauts would both live and work in the complex, which lets natural light filter in through holes dotted around the walls. 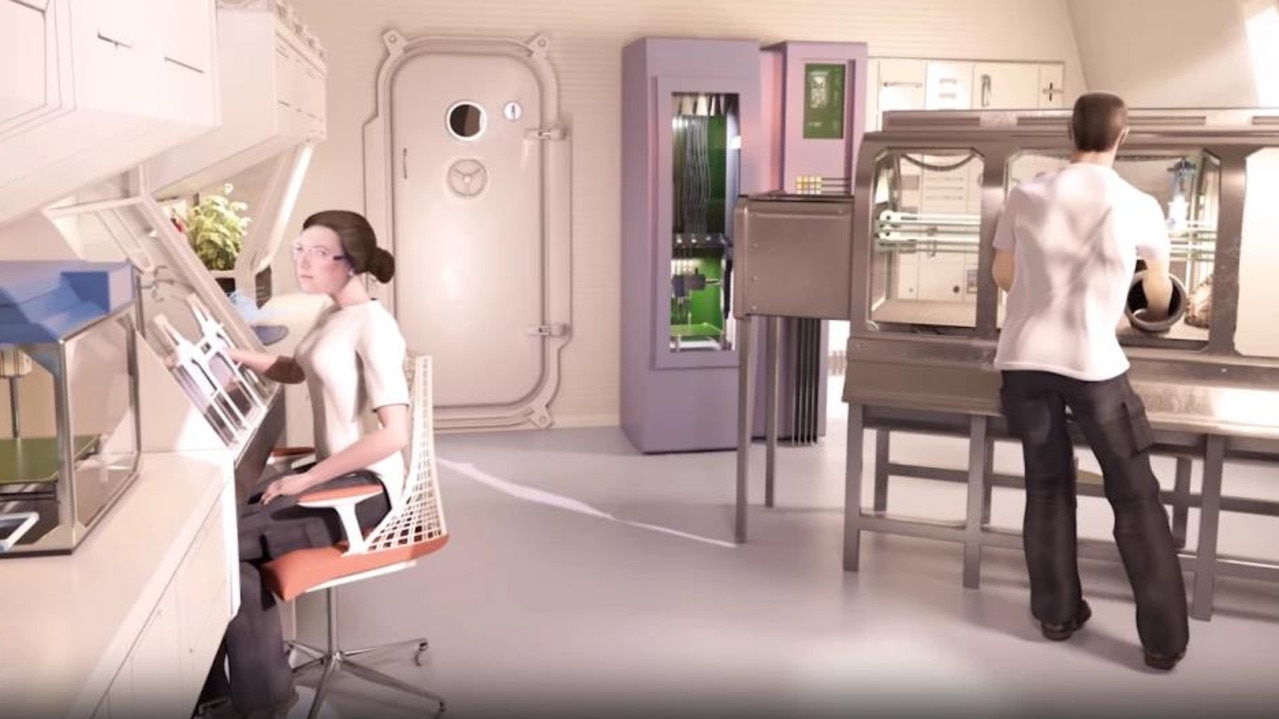 Astronauts will be able to conduct science experiments in laboratories in each building. Picture: NASA Each Mars X House would include space for relaxing. Picture: NASA

Models of the structures show astronauts working in the lab and relaxing in their rooms, with one astronaut even playing a guitar for a bit of relaxation.

Mars X House was one of three winners of Nasa’s Habitat Challenge.

Second place went to Team Zoperhous from Arkansas, US, whose shelter would be printed by an autonomous rover. 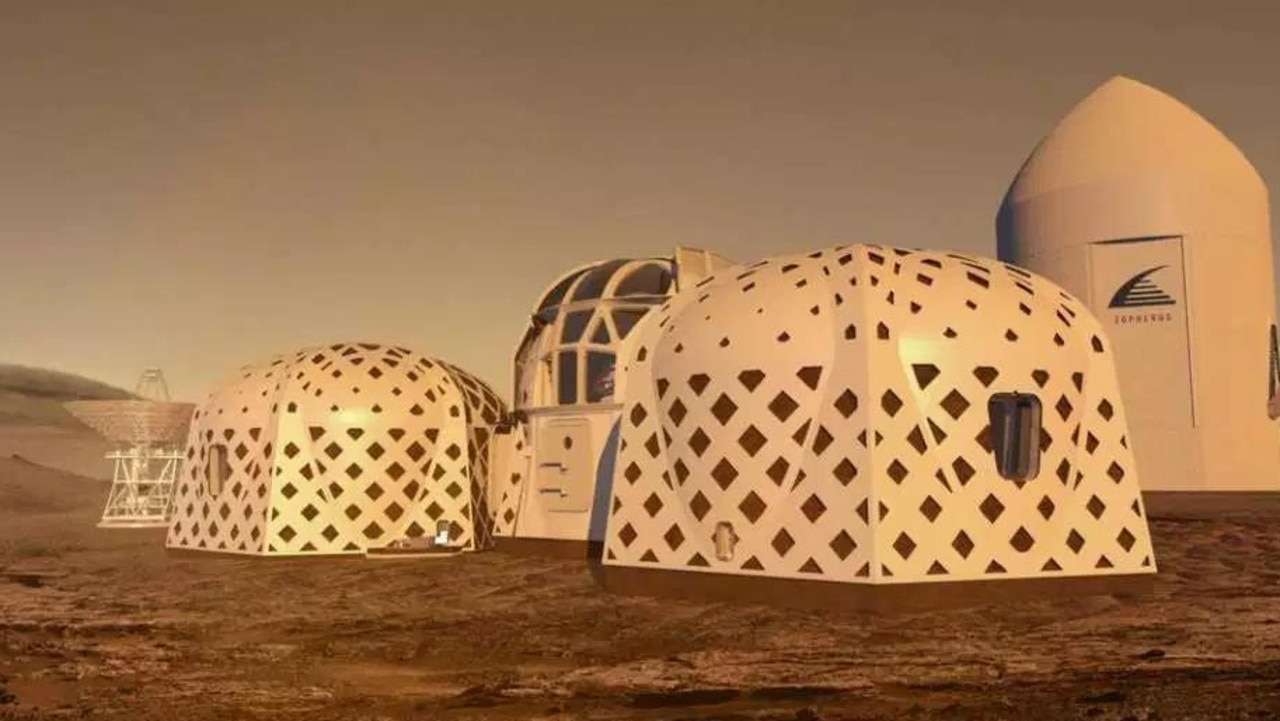 This honeycomb design finished in second place in the latest round of the NASA competition. Picture: NASA

The Mars Incubator group from Connecticut, US, came third with a design that includes space to grow plants for food. 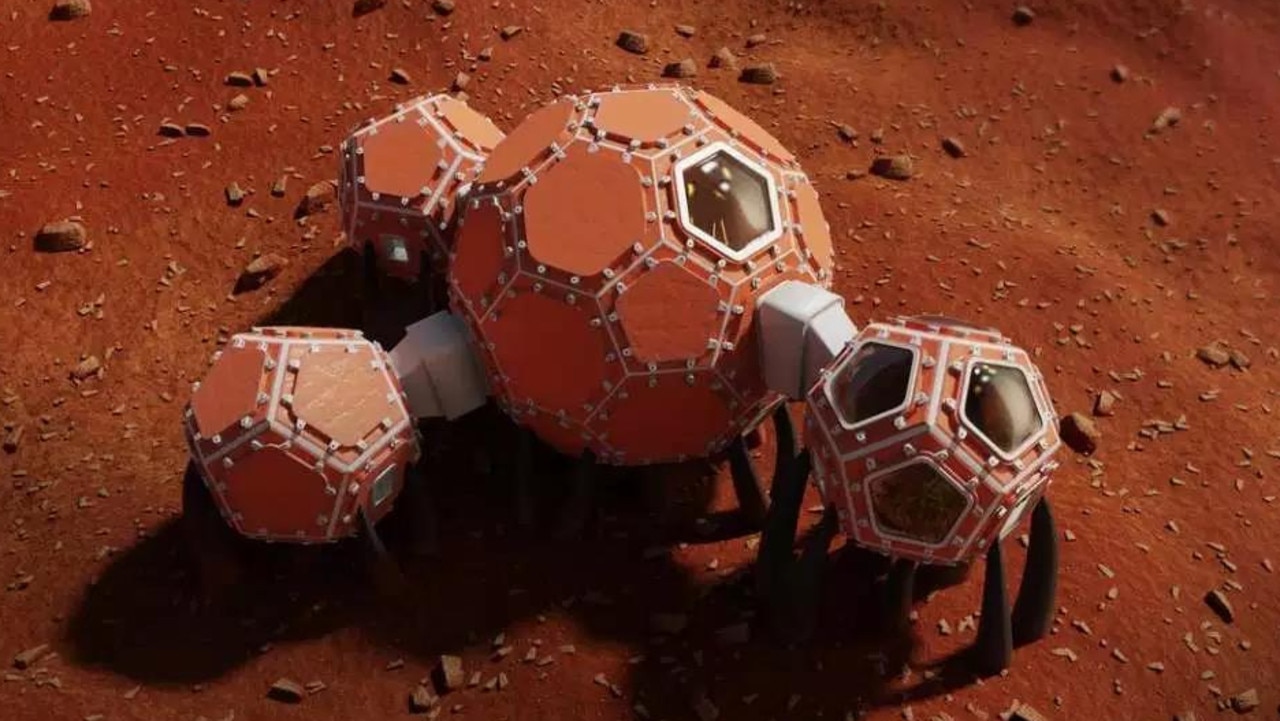 The three winners shared a $139,000 prize ahead of the grand final next month, for which they will build a 3D model of their designs for the chance to win the $1.1 million prize.

MARS’ MYSTERY METHANE BURP
NASA’s Curiosity rover detected a tiny amount of methane in 2013 but where the gas was coming from was never explained.

Scientists at the National Institute of Astrophysics* in Rome, Italy, have looked afresh at the information that came back from the Mars Express orbiter, also in 2013. They found the spacecraft also detected a methane “burp” just one day after Curiosity.

Having the same information coming in from two separate spacecrafts means it is more likely to be true.

The best guess for the source of the gas is that it escaped from cracks in ice near the Gale Crater, which is thought to be an ancient lake. The gas was found near Mars’ Gale Crater. Picture: NASA

Methane is a gas made of carbon* and hydrogen*. On Earth, it is found below the ground and the sea and in the atmosphere. Some, but not all, of the methane on Earth is from living things breaking down, which is why scientists are excited about the possibility that methane on Mars could be a sign of current or former life.

Computer models have shown that up to 4000 tonnes of methane may have been released.

The ExoMars Trace Gas Orbiter will be the next spacecraft to look for Mars methane and scientists will be investigating the carbon in the gas to see if it actually is a sign of life.

CLASSROOM ACTIVITIES
1. Write a Story
Write a science-fiction story inspired by the mystery of the methane burp. Your story must include facts about Mars from today’s Kids News story that will make it come alive for your reader

2. Extension
The towers in today’s story won the 3D Printed Habitat Challenge. Design a habitat that you think could be better for astronauts living and working on Mars. Include a report on your design, explaining the features of your habitat and describing the things that make it better than Mars X House. Don’t forget to give your building a name.

HAVE YOUR SAY: Do you think humans will ever live on Mars? Would you live there?
No one-word answers. Use full sentences to explain your thinking. No comments will be shown until approved by editors.