NASA has revealed an amazing close-up photograph of Jupiter captured by its Juno spacecraft.

The stunning image shows swirling* bands of cloud and whirlwinds of liquid and air within Jupiter’s northern hemisphere.

It was captured as the Juno spacecraft performed its 13th close fly-by* of the planet.

The region looks chaotic* and stormy with dark and bright cloud formations* swirling around.

The bright clouds are most likely ammonia or ammonia and water, mixed with a sprinkling of unknown chemicals. Juno will continue studying Jupiter for another three years after NASA extended its $1.1 billion program to July 2021.

“With these funds, not only can the Juno team continue to answer longstanding questions about Jupiter that first fuelled* this exciting mission, but they’ll also investigate new scientific puzzles motivated by their discoveries thus far,” Thomas Zurbuchen, associate administrator for NASA’s Science Mission Directorate in Washington, D.C., said. 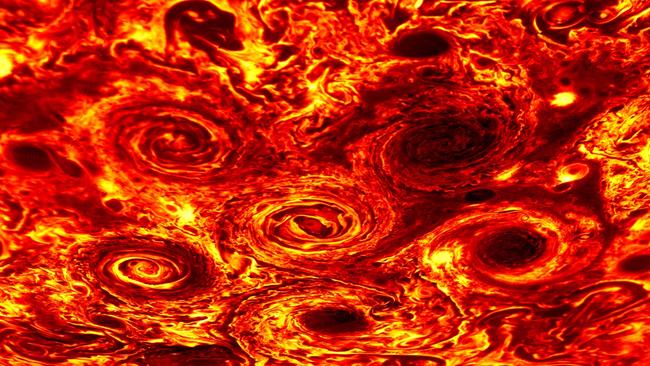 This picture provided by Nature and released by NASA shows Jupiter’s South Pole.

“With every additional* orbit*, both scientists and citizen scientists will help unveil new surprises about this distant world,” he said.

Juno launched in August 2011 and arrived in orbit around Jupiter on July 4, 2016. The spacecraft is studying Jupiter’s gravity and magnetic fields as well as its thick atmosphere.

NASA’s mission to the Sun A model of the Juno spacecraft. Picture: NASA

1. Jupiter is the largest planet in our solar system, more than twice as massive as all the other planets combined.

2. Jupiter spins faster than any other planet, taking a little under 10 hours to complete a turn on its axis, compared with 24 hours for Earth.

3. Jupiter has at least 63 moons. The four largest moons are called Io, Europa, Ganymede, and Callisto.

5. The temperature near the planet’s centre may be about 23,870 degrees Celcius — hotter than the surface of the Sun.

swirling: moving in a twisting or spiral pattern

fly-by: to fly past something

chaotic: in a state of confusion or not in order

formations: a thing that has been formed

fuelled: started the idea for

orbit: the path of something around a planet

1. Name the spacecraft the captured the image of Jupiter.

2. How many fly-bys of Jupiter has it completed?

3. Which hemisphere is the image taken in?

4. When will Juno stop orbiting Jupiter?

5. What is Juno studying on Jupiter?

1. What I wonder about Jupiter…

The new photograph of Jupiter is fascinating! We know from the article that scientists had many questions about Jupiter — some of them have now been answered, but Juno’s discoveries have also raised new questions. What do you wonder about our solar system’s largest planet? Spend 15 minutes jotting down as many questions as spring to mind that you would love to know about Jupiter.

Extension: Juno’s mission will now run until 2021 but what happens after that? Imagine you are a NASA scientist in 2021 and write a letter to the government to convince them to provide more funding for further space exploration of Jupiter. In order to convince them you will need to provide reasons why it is beneficial to us on Earth.

QUESTION: Do you think you could live on Jupiter? Why or why not?

No one-word answers. Explain your reasons and use lots of adjectives.