A NASA spacecraft launched yesterday and zoomed towards the sun on a quest* to get closer to our star than ever before.

As soon as this November, the Parker Solar* Probe* will fly straight through the edges of the sun’s corona, or outer atmosphere. It will pass Venus in October.

It will eventually get within six million kilometres of the surface, staying cool despite the extreme heat and radiation*, protected by a carbon heat shield and other hi-tech wonders.

“All I can say is, ‘Wow, here we go.’ We’re in for some learning over the next several years,” said Eugene Parker, a 91-year-old astrophysicist*. NASA named the spacecraft after Mr Parker.

The Parker probe will make 24 close approaches to the sun on the seven-year, $2.1 billion project.

Thousands of spectators*, including Mr Parker and his family, crowded the launch site and nearby towns in the middle of the night.

Mr Parker suggested the existence of solar wind — a steady stream of particles* blasting off the sun — 60 years ago.

It was the first time NASA named a spacecraft after someone still alive, and Mr Parker wasn’t about to let it take off without him.

The Delta IV Heavy rocket thundered into the pre-dawn darkness and climbed through a clear, star-studded sky. NASA needed the 23-storey rocket, plus a third stage, to get the tiny Parker probe, which is the size of a small car, racing toward the sun.

From Earth, it is 150 million kilometres to the sun, and the Parker probe will be within 4 per cent of that distance at its closest.

That will be seven times closer than previous spacecraft.

It was the first rocket launch ever witnessed by Mr Parker, professor emeritus* at the University of Chicago.

NASA’s science mission chief, Thomas Zurbuchen, was thrilled not only with the launch, but Mr Parker’s presence.

“I’m in awe,” Mr Zurbuchen said. “What a milestone*. Also what’s so cool is hanging out with Parker during all this and seeing his emotion, too.” Scientists hope to unlock the mysteries of the sun, a yellow dwarf star around 4.5 billion years old.

Scientists would like to know why the corona is hundreds of times hotter than the surface of the sun and why the sun’s atmosphere is continually expanding and accelerating*, as Mr Parker accurately predicted in 1958.

“The only way we can do that is to finally go up and touch the sun,” Ms Fox said.

“We’ve looked at it. We’ve studied it from missions that are close in, even as close as the planet Mercury. But we have to go there.” 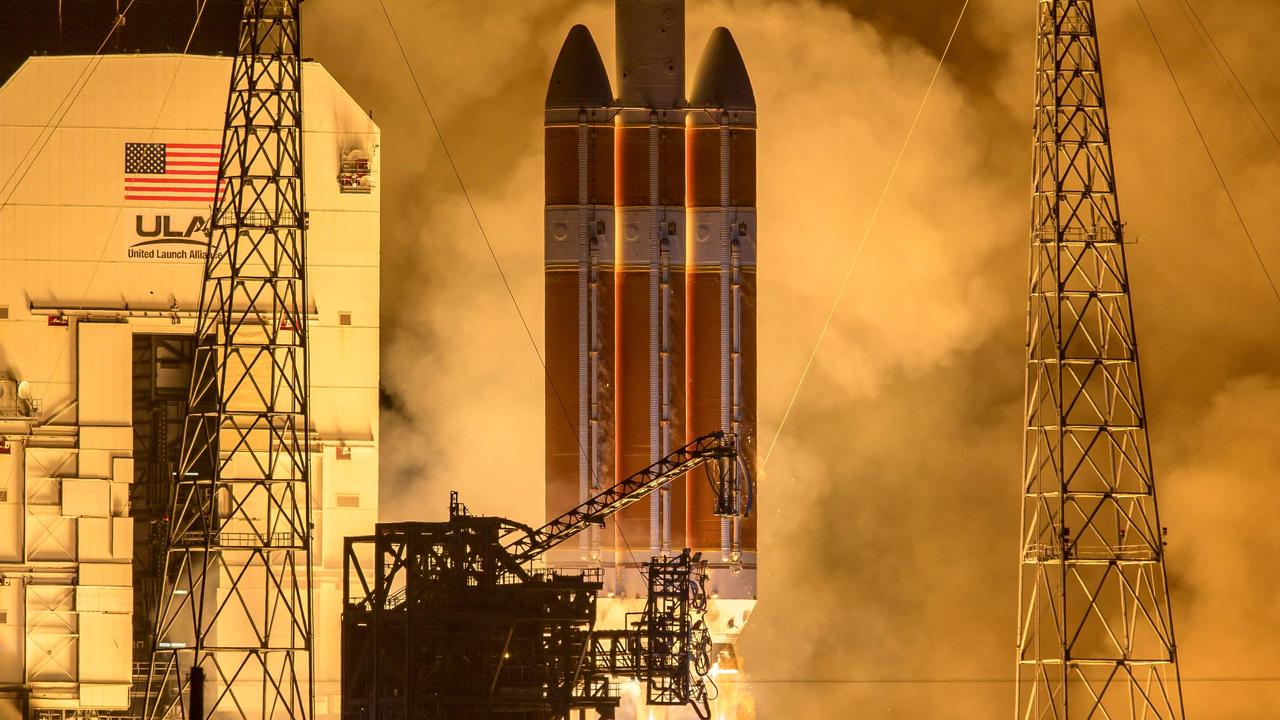 Delta IV Heavy rocket launching the Parker probe. The rocket is 23 storeys high but the probe is only as big as a small car. Picture: AFP/NASA/Bill Ingalls

The spacecraft’s heat shield will serve as an umbrella, shading the science instruments.

“We’ve had to wait so long for our technology to catch up with our dreams,” Ms Fox said.

More than 1 million names are aboard the spacecraft, submitted by space enthusiasts*, as well as photos of Mr Parker, the man, and a copy of his 1958 scientific paper on solar wind.

solar: to do with the sun

probe: equipment to explore or examine

1. When will the solar probe pass Venus?

2. Who is Eugene and why is he in the story?

3. How big is the Parker probe?

4. What sort of star is the sun and how old is it?

5. What is on board the spacecraft?

Draw a diagram that will help you better understand the distances quoted in this news story.

In your diagram 1cm on paper equals 10 million kilometres in space. (The distances in your diagram will be to scale, the objects will not be.)

Draw a large yellow circle to represent the sun

Draw a small blue circle to represent the Earth, 15cm away from the surface of the sun

Draw a spacecraft to represent the Helios 2, 4.3cm away from the surface of the sun

Draw the Parker Solar Probe, 2.5cm away from the surface of the sun (to show the distance on its first orbit of the sun)

Draw the Parker Solar Probe 0.6cm (6mm) away from the surface of the sun (to show the closest distance it will be to the sun)

2. Extension: Research more about the sun and make a list of 5 fascinating facts.

HAVE YOUR SAY: What would you most like to know about the sun and the planets in our solar system? Why?
No one-word answers. Use full sentences.