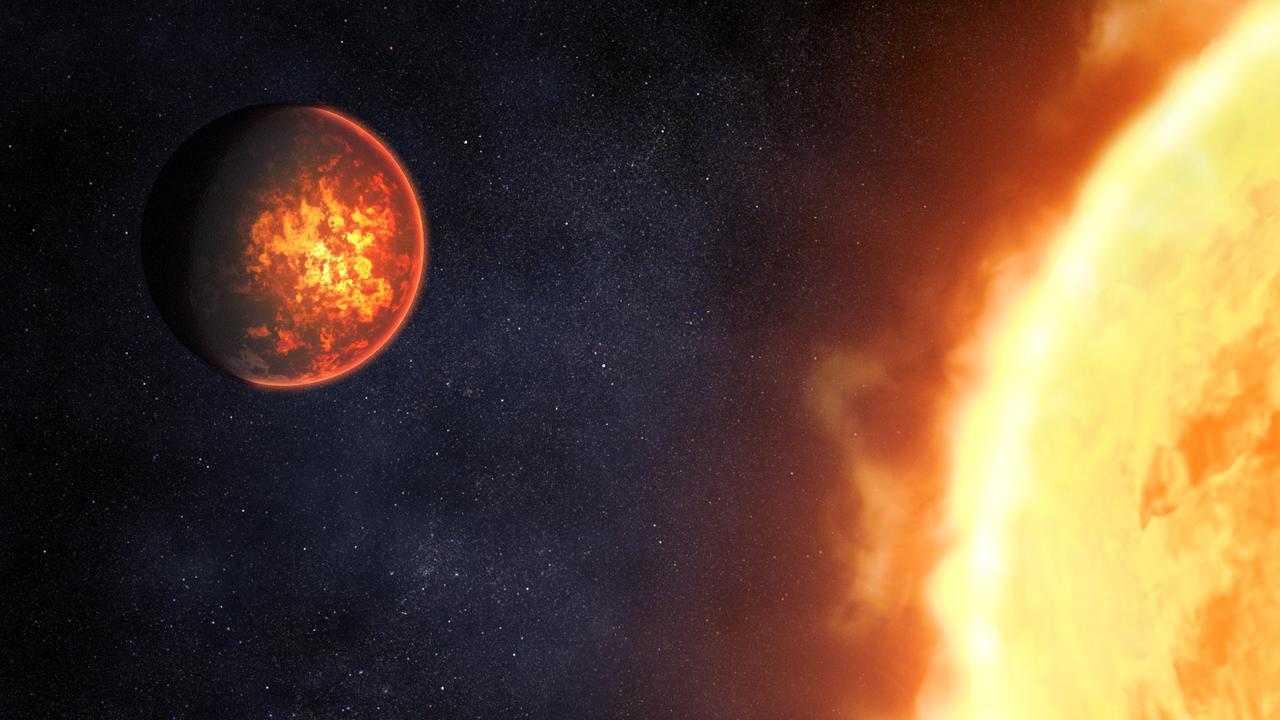 While this artist’s impression shows what scientists think 55 Cancri e might look like, the James Webb Space Telescope will soon deliver images of the real thing, a rocky planet with a diameter almost twice that of Earth, orbiting close to its sun. Picture: NASA/ESA/CSA/Dani Player/STScI

A distant “super-Earth”, with a lava-covered surface that is constantly burning, is about to be glimpsed* by scientists for the first time.

NASA said its James Webb Space Telescope was just weeks away from revealing 55 Cancri e, which it called a “super-hot super-Earth.”

55 Cancri e — which is about 50 light years from Earth — is fewer than 2.4 million km from its sun-like star. Compared to our solar system, that’s 1/25th the distance between our sun and Mercury, where the average temperature is a fiery 179C. 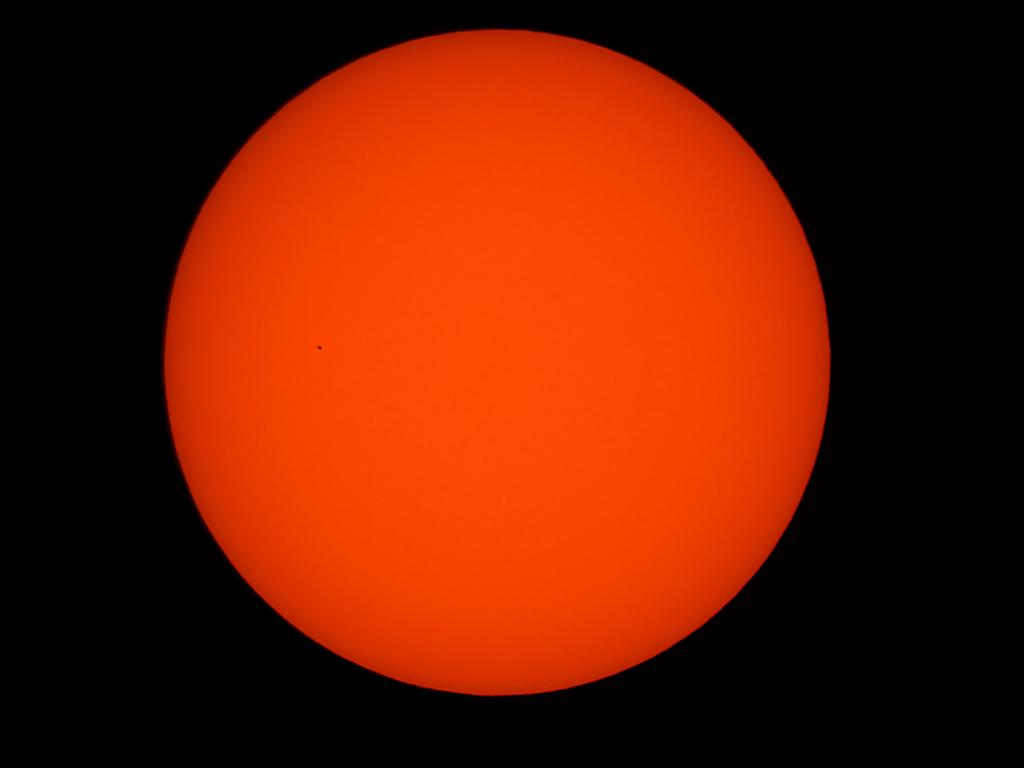 Mercury is pictured here passing in front of the sun on November 11, 2019. 55 Cancri e is a mere 1/25th the distance from its sun-like star, so is likely far hotter than Mercury’s average temperature of 179C. Picture: Damien Meyer/AFP

It takes 55 Cancri e just 18 hours to revolve* around its star, compared to the 365 days it takes Earth to go around our sun.

“With surface temperatures far above the melting point of typical rock-forming minerals*, the day side of the planet is thought to be covered in oceans of lava,” NASA said of 55 Cancri e.

“Imagine if Earth were much, much closer to the sun. So close that an entire year lasts only a few hours. So close that gravity has locked one hemisphere in permanent, searing* daylight and the other in endless darkness.

“So close that the oceans boil away, rocks begin to melt and the clouds rain lava.”

NASA described super-Earths as “a class of planets unlike any in our solar system”.

“(They) are more massive than Earth yet lighter than ice giants like Neptune and Uranus, and can be made of gas, rock or a combination of both,” the NASA website states. “They are between twice the size of Earth and up to 10 times its mass”. 55 Cancri e was initially viewed through NASA’s less powerful Spitzer Space Telescope, which showed that its hottest spot was not necessarily the one facing the star. NASA scientists have suggested that’s because the planet has “a dynamic* atmosphere that moves heat around.”

Another theory is that the planet may be like Mercury, rotating three times for every two orbits, creating a day-night cycle.

“That could explain why the hottest part of the planet is shifted,” said Stockholm University Associate Professor Alexis Brandeker, who leads one of the teams studying the planet. “Just like on Earth, it would take time for the surface to heat up. The hottest time of the day would be in the afternoon, not right at noon.” 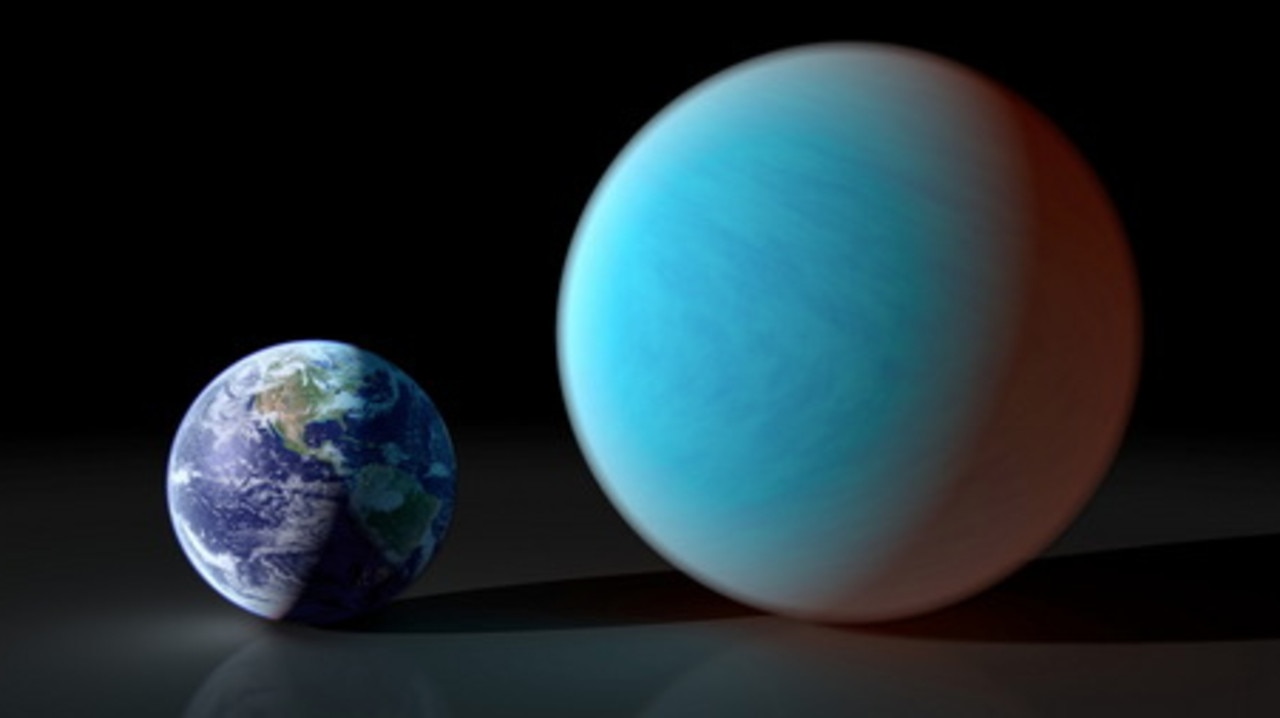 His team will test the theory by observing the planet’s hemispheres during four orbits. If the planet does have a day-night cycle, they will observe each hemisphere twice and will be able to pick up any difference between them.

In that case, the surface would heat up, melt, and even vaporise* during the day, “forming a very thin atmosphere that Webb could detect”, NASA said.

“In the evening, the vapour would cool and condense* to form droplets of lava that would rain back to the surface, turning solid again as night falls.” 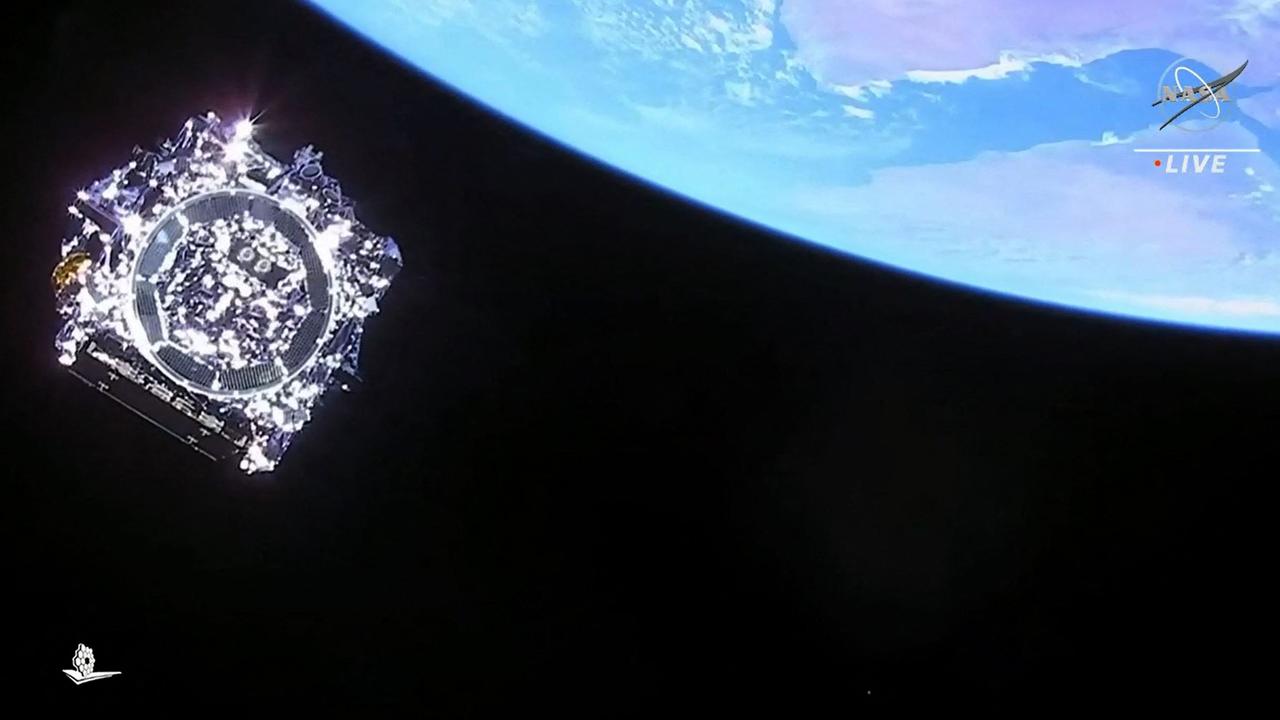 The first observation of the planet is expected in the next few months once the James Webb Space Telescope comes online.

The telescope is also likely to help scientists deepen their understanding of another distant planet — the airless LHS 3844 b.

According to NASA, researchers plan to train Webb on these planets to better understand the geological* diversity of planets across the galaxy and gain insight into the evolution* of rocky planets like Earth.

First image of black hole in our galaxy

CLASSROOM ACTIVITIES
1. Imagine if …
To quote NASA, “Imagine if Earth were much, much closer to the sun, so close that an entire year lasts only a few hours. So close that gravity has locked one hemisphere in permanent, searing daylight and the other in endless darkness.

“So close that the oceans boil away, rocks begin to melt and the clouds rain lava.”

There is some great descriptive language and imagery in this quote. See if you can add some further lines to this description on what would happen to Earth if it was so much closer to the sun. What would be the effects on humans, animals and the land?

2. Extension
Sketch a visual representation of Earth if it was much closer to the sun in the searing heat and unable to sustain life.

VCOP ACTIVITY
Hollywood blockbuster
Did you know that most movies, even the completely fictional ones, are usually based on some sort of warped version of reality? Your job is to pitch the next Hollywood blockbuster storyline using facts and ideas from the article.

Make sure you plan your movie idea first.

Where is the story set?

What is the small problem?

How does it turn into a large problem?

How will they solve the problem?

Who are your main characters?

Then create a draft about your favourite section of the story – you do not need to write the whole thing.

This section will be the teaser that shows Hollywood an exciting part of your idea, so use your VCOP to draw them in.

Then you can explain where that part of the story fits in your whole plan.

Practise pitching to a classmate to see what feedback they can give you, so you are ready for your big shot at Hollywood!