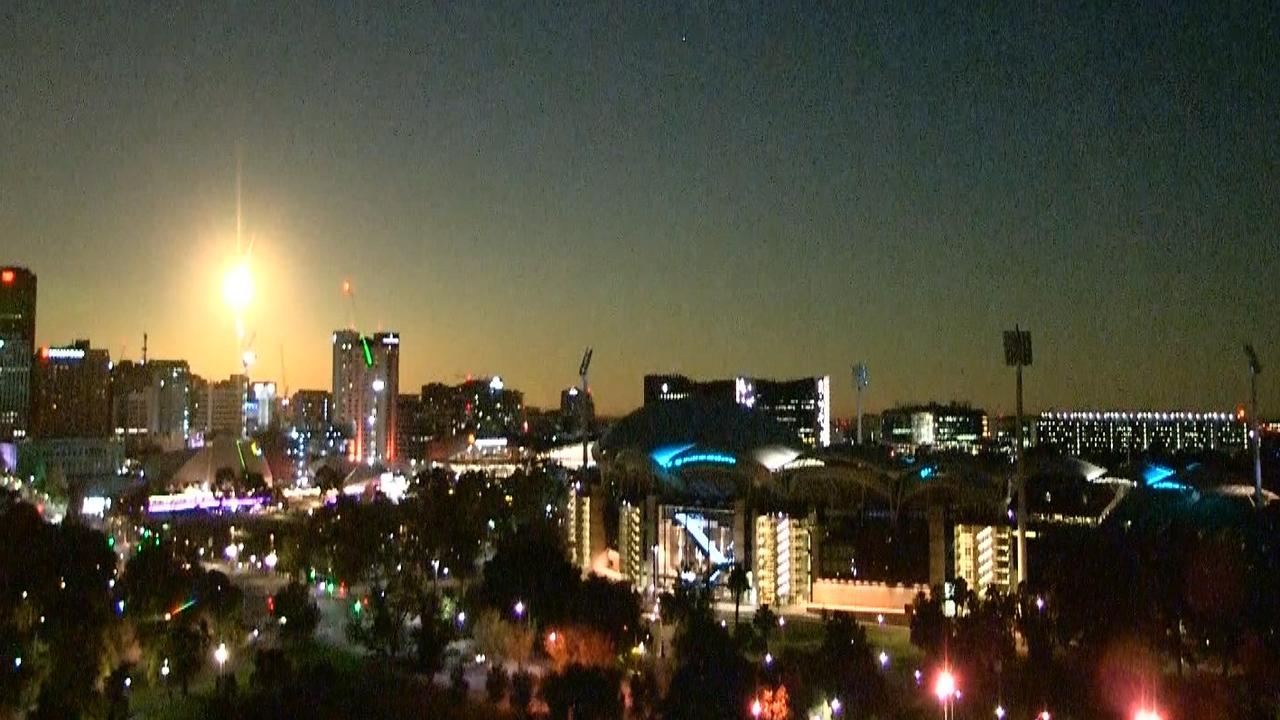 The meteorite above the Adelaide city skyline on May 22. Picture: 9 News

NASA believes that a mysterious, massive fireball that lit up southern Australia’s night sky last week could have been the size of a small car when it entered Earth’s atmosphere.

People in South Australia and western Victoria saw and heard the mystery object — now known to have been a meteorite — late on Tuesday May 21. It had a trail of light behind it as it descended.

“(It) made the whole house rumble, thought it was an earthquake,” she wrote.

VIDEO: This video was taken in the Adelaide suburb of Modbury

Many people in Victoria also witnessed the fireball, including Adelaide truck driver Darren Waters, who captured amazing video of it while driving on the Western Hwy, just east of Ararat, Victoria.

VIDEO: This video was taken in Melbourne

A NASA centre that studies asteroids and meteors captured information from sensors showing where the meteorite landed and how much energy it produced.

Information from the Center for Near-Earth Object Studies in California, US, shows the meteorite landing site as a reasonably large blue-green dot on the Center’s map of reported fireballs. 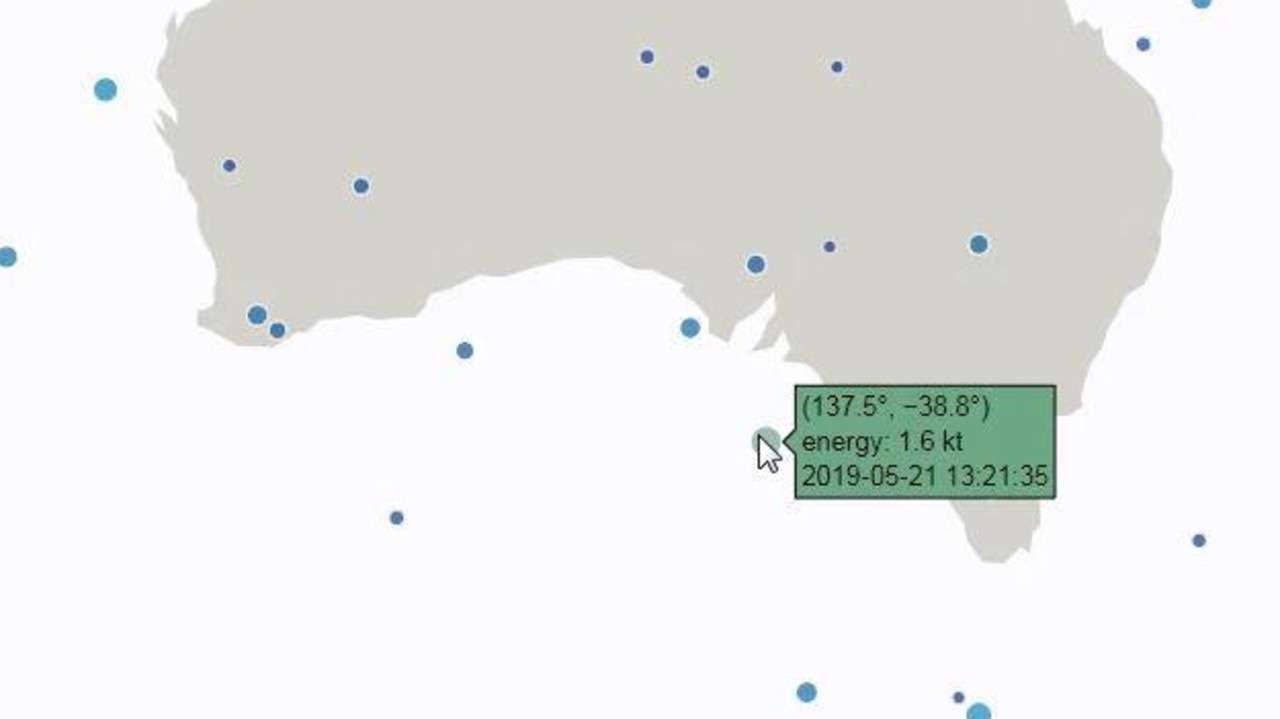 The fireball, shown by the green-blue dot, landed in the Great Australian Bight off the coast of South Australia and Victoria. Picture: Centre for Near-Earth Objects Studies

The meteorite reached 44,100kmh when it entered Earth’s stratosphere*. It then burned and broke up, with some parts landing about 300km west-south-west of Mount Gambier, SA in the Great Australian Bight.

Professor Phil Bland from Curtin University, WA, said “the energy deposited in our atmosphere when the thing exploded, 1.6 kilotonnes*”, was impressive.

“It’s in the range of a small nuclear weapon. Because it exploded at an altitude of 31.5km it didn’t do any damage.”

NASA aerospace engineer Dr Steve Chesley told ABC the object could have been the size of a small car or big couch when it entered the atmosphere, but high pressure caused it to break up and “small pieces the size of a fist or larger” could make their way to the surface as meteorites.

“You wouldn’t want it to land on your head,” he said. “But these wouldn’t really do any damage on the ground.

“What the folks there along the coast of South Australia saw was a spectacular light show, probably a very loud sonic boom that would rattle the windows, this wasn’t big enough to break windows I expect, and then just small pebbles falling to the Earth and not at hypersonic* velocities*, they slow down very quickly.”

The meteor reached “peak brightness” at an altitude* of 31.5km, travelling at 11.5km a second, with a calculated total impact energy of 1.6 kilotonnes over the water to our south.

In comparison, the nuclear bomb that exploded over Hiroshima, Japan, at the end of World War II had a total impact energy of 15 kilotonnes. 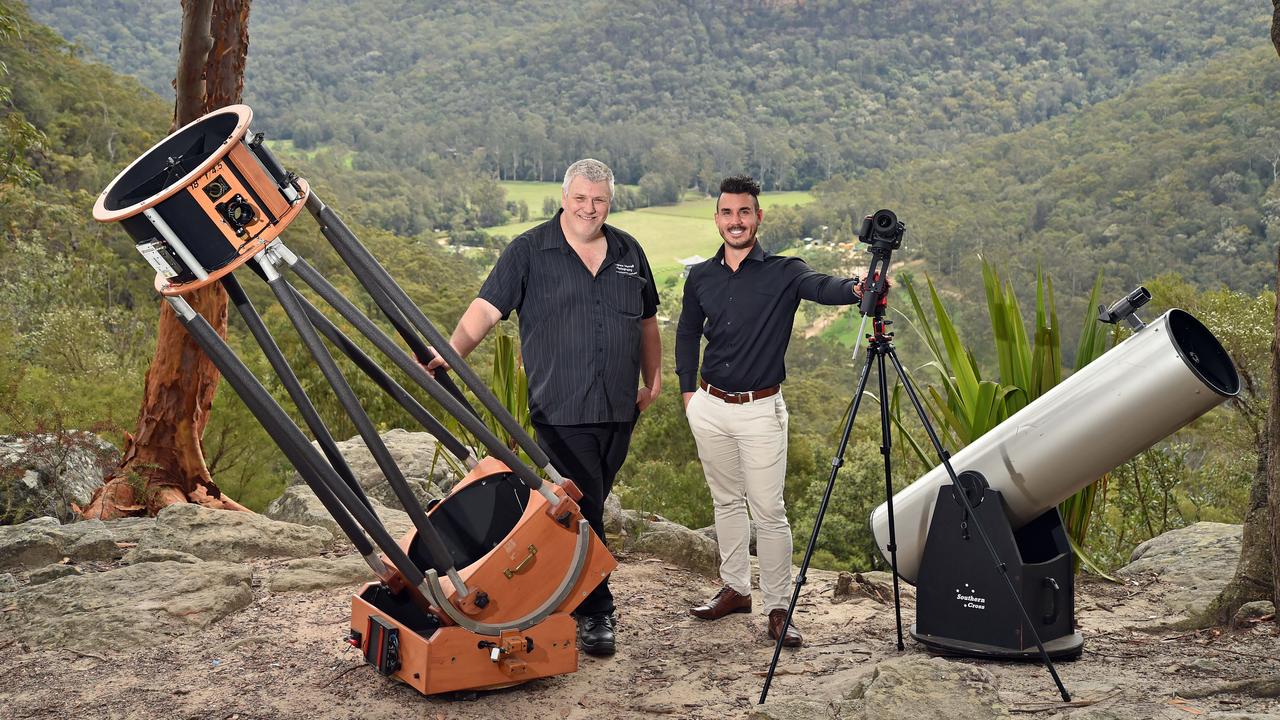 Astro photographers such as Andrew Murrell and David Magro know when to expect annual meteor showers so they have the best chance of getting great photos. Picture: AAP

METEOR SHOWERS
The meteorite over southern Australia came only two days after a meteor shower seen across the Northern Territory’s night sky.

Astronomers* know that such a busy night sky is perfectly normal and can happen a few times a year.

Each year, from about mid-April to mid-to-late May, Earth moves through a cloud of debris left behind by Halley’s comet hundreds of years ago. The name Eta Aquarids comes from the constellation* called Aquarius, because it looks like the meteors come from the part of the sky we see Aquarius in. Halley’s comet crosses the sky on December 18, 1985. It is visible from Earth every 86 years. Picture: Anglo-Australian Observatory

Peak meteor viewing for Eta Aquarids is usually around the first week of May and you could see up to 50 meteors an hour if the sky is clear.

This was a good year for seeing Eta Aquarids in the Southern Hemisphere as the peak nights were at the same time as a new moon, so the sky was darker than when the moon is fuller.

Most meteors move past the Earth and don’t enter our atmosphere. 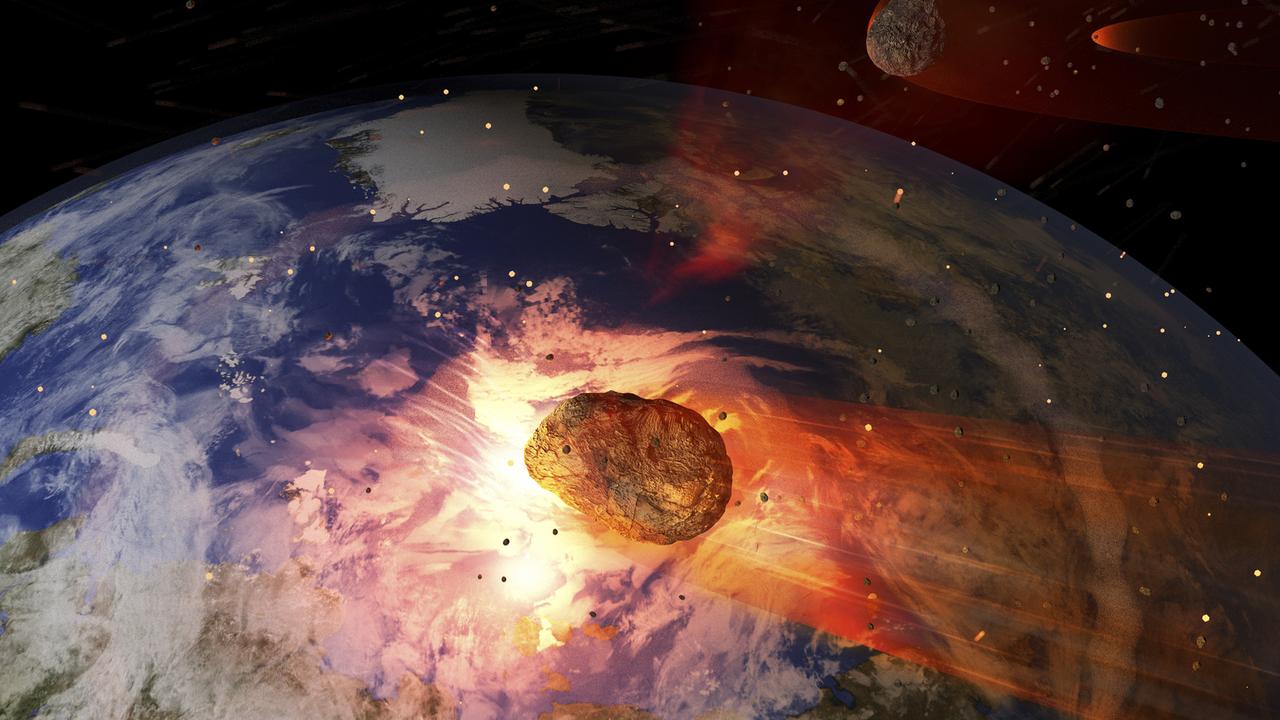 An illustration of what a large asteroid would look like if it was moving towards Earth. An asteroid this large would result in mass extinctions, much like what happened when an asteroid created the Chicxulub crater in Mexico, leading to the extinction of many plant and dinosaur species. Picture: Earth texture maps courtesy of NASA 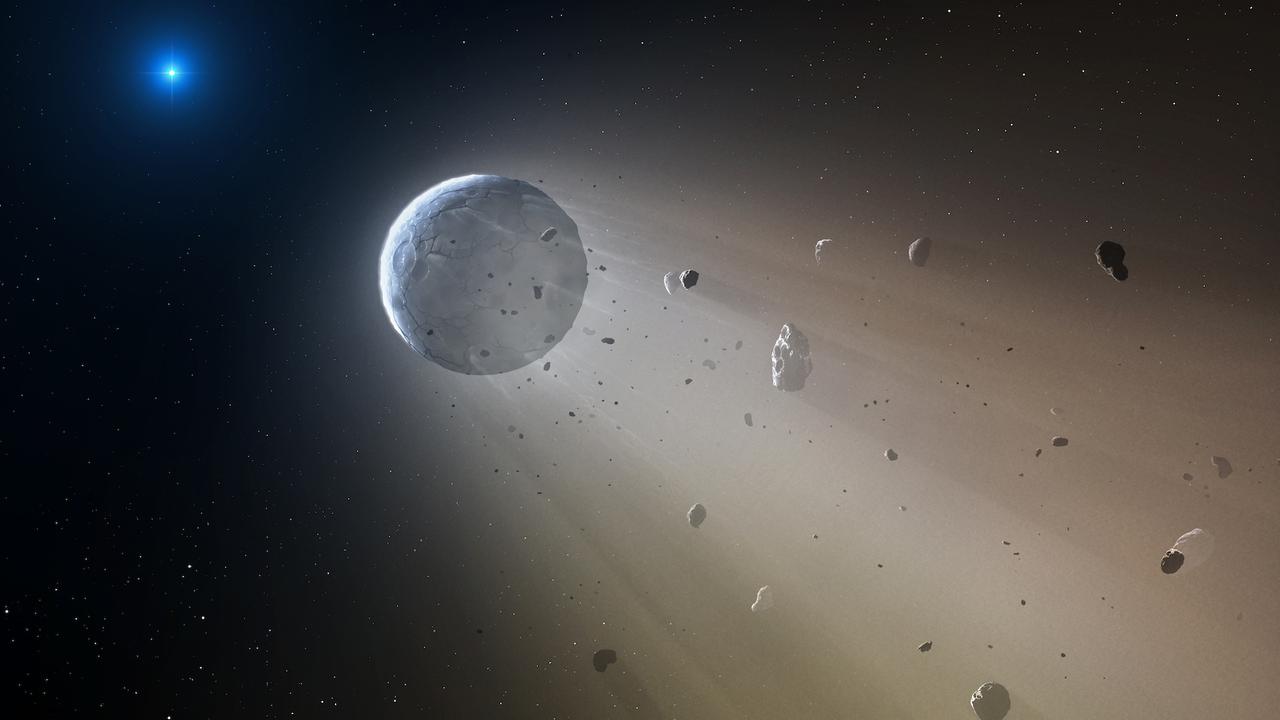 An asteroid slowly disintegrating as it orbits a white dwarf star would look something like this artist’s impression. Picture: Mark A Garlick.

CLASSROOM ACTIVITIES
1. From Meteoroid to Meteorite
Carefully read the final part of the article, subtitled “Space Rocks”. Draw a picture and add some labels and captions to show the process from being a meteoroid to becoming a meteorite. Once your picture is complete, practice explaining the transformation out loud and when you are confident share your verbal explanation with a classmate.

2. Extension
There are a lot of interesting words in this news article. Perhaps there are terms that are completely new to you, or ones you haven’t used before. Go through the article and highlight or write down any words that you think would be great additions to your vocabulary. Choose 3 of the words to write into a sentence. Then, throughout the next week, see if you can incorporate these words into conversations you have or other work that you do.

VCOP ACTIVITY
The Sky is Falling
Imagine hearing a loud bang and then when you look up into the night sky, suddenly it’s raining stars! Some people would have thought it was amazing and beautiful, others might have panicked and thought the world was ending.

I want you to write a short story about the day the stars fell from the sky. You can use as much embellishment as you like, as most panicked retells are a little exaggerated to give the impact of emotions. Today, you get to play the role of the panicked citizens.

See if you can use some key facts from the article to match up the events. And use lots of description, emotions and short sentences to build suspense.

HAVE YOUR SAY: Have you ever seen a meteor, meteorite or comet?
No one-word answers. Use full sentences to explain your thinking. No comments will be published until approved by editors.