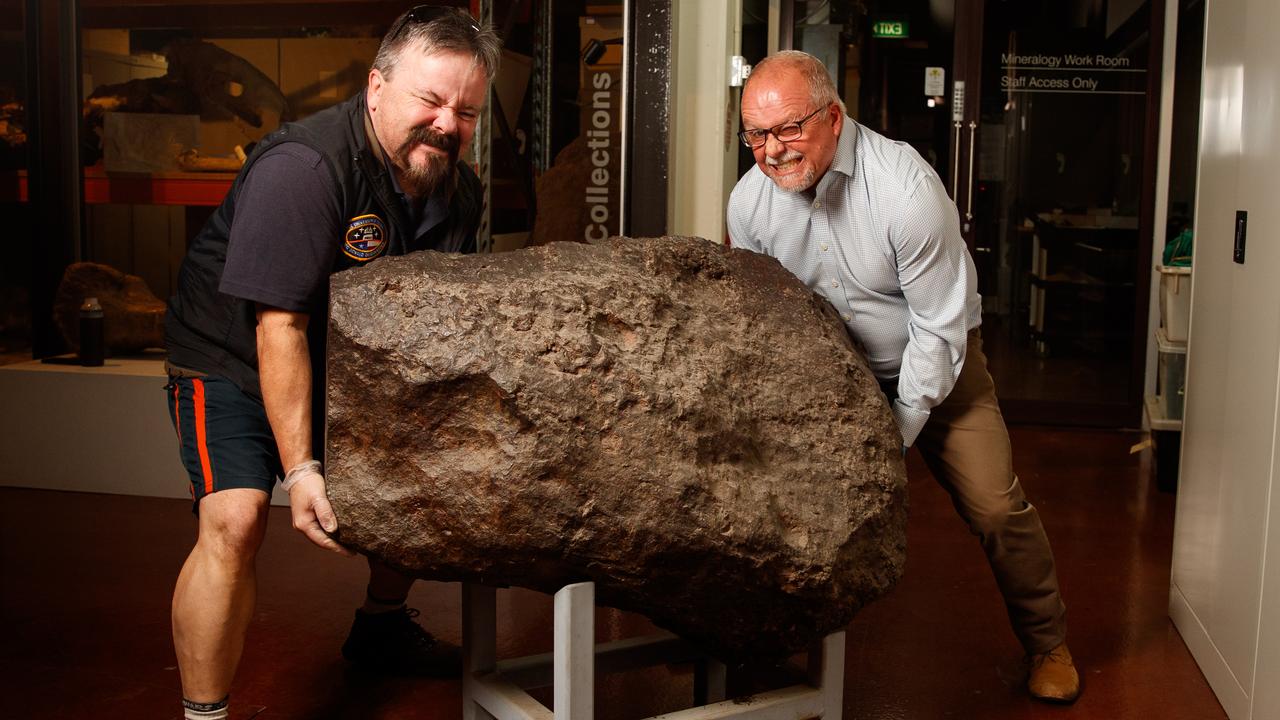 A massive meteorite that has been hidden in a basement for more than 20 years has been rediscovered.

The 4.5 billion-year-old Huckitta meteorite, dug up from a Northern Territory cattle station in 1937, was put in the basement of the South Australian Museum’s Science Centre during major renovations in 1998-2000.

It is being moved from its storage to the Planetarium at Mawson Lakes, SA, where it will go on display once social gatherings begin again.

“You’re touching the oldest thing that you’ll ever touch in your life, something 4.5 billion years old from the formation of our Solar System,” he said.

“Meteorites are pretty amazing things. Before we started sending objects into outer space and landed on the moon and things like that, the only way we knew what the Solar System was made of was by analysing meteorites.”

A slice, taken from the meteorite with great difficulty in 1938, is still on display in the museum’s Meteorite Gallery. It took more than five days to make the two cuts. The Huckitta meteorite was known to local Aboriginal people and station workers, but it wasn’t until 1937 that Australian geologist Cecil Madigan recovered the meteorite. It took more than 130 hours to make two cuts at a rate of about 1cm/hour. Picture: SA Museum

The Huckitta meteorite is a rare type of metallic* meteorite called a “pallasite”, one of only 95 in the world.

“It’s a bit like a Christmas pudding, where the nickel-iron is the batter,” Mr McHenry said. “And it’s full of crystals of olivine, a silicate mineral, the fruit mixed through the metal.”

These ingredients are from the asteroid belt between Mars and Jupiter.

“So when the solar system was formed and things were coalescing* out of the dust cloud, you had the gravity of Jupiter and the gravity of the Sun pulling in this one place,” Mr McHenry said.

“The lumps didn’t coalesce into larger pieces that could eventually form a planet like Earth with a nickel-iron core.”

Some of the world’s most important science collections include samples of the famous Huckitta meteorite including at Fort Worth, Texas, US; Arizona State University, Tempe, US; the Natural History Museum, London, UK; Max Planck Institute, Mainz, Germany; and the National Museum of Natural History, Washington, D.C, US.

Before its removal from the NT, it was a landmark used as a cattle mustering* point and known by locals as “The Black Rock”. An 88-image composite of the Geminid meteor shower above Brisbane. Picture: Paul Balfe

Draw a horizontal line across your page. At one end mark 4.5 billion years ago when the meteorite was formed. As there is no information about what happened with this meteorite for a long period of time (approximately 4.5 billion years) you can put a ‘time break’ in your timeline indicating the period of time that is missing and complete the rest of the timeline using an appropriate scale to show the other events. Your timeline should finish sometime in the near future when the meteorite will be on display.

2. Extension
Write a museum label
This meteorite is due to go on display when it is safe to have social gatherings again. The curators of the museum need some help to write a label to attach to the display explaining what the meteorite is. Your label would also need to explain, where it was found, what it is made of and where it has been for the last 20 years. It will need to be written as a succinct paragraph.

HAVE YOUR SAY: Have you seen a meteor or meteorite? Where? When What did it look like?
No one-word answers. Use full sentences to explain your thinking. No comments will be published until approved by editors.