This Martian rock shows the drill hole from where the Perseverance rover successfully collected its sample. Picture: AFP Photo/NASA/JPL-Caltech

NASA’s newest and most advanced Mars rover has successfully collected its first rock sample for return to Earth, after the August attempt failed.

“I’ve never been more happy to see a hole in a rock,” he posted on social media on September 2.

NASA’s rover team has now confirmed after further photographic review that last week’s drilling and collection resulted in Perseverance completing its first sample grab, tucking away the titanium tube containing the rock for its eventual return to Earth.

When Perseverance drilled into much softer rock a month ago, the sample crumbled and didn’t make it inside the titanium* tube. The rover drove approximately 800m to a better spot and tried again.

Initial photos taken on September 1 did show a sample in the tube but NASA confirmation was delayed when later images were inconclusive*. The sample is about the width of a pencil and more photos are planned. Perseverance arrived in February at Mars’ Jezero Crater — thought to have been a lush lake bed and river delta billions of years ago — in search of rocks that might hold evidence of ancient life. NASA plans to launch more spacecraft to retrieve the samples collected by Perseverance and engineers are hoping to return as many as three dozen samples over the course of about a decade.

China has meanwhile developed a prototype* miniature helicopter for surveillance* work during its own Red Planet missions, following the historic landing of a Chinese robotic rover earlier in the year. A June 11 ceremony in the Chinese capital of Beijing unveiled the first images taken by the country’s Mars rover. The prototype of a miniature helicopter for future Chinese rover missions on Mars has just been released. Picture: Getty

The prototype is similar in appearance to the robotic helicopter Ingenuity*, developed by NASA for the Perseverance mission, according to a photograph posted on the website of China’s National Space Science Center last week.

The agency said the helicopter could be a tool for China’s follow-up exploration of Mars, but did not give details. An illustration of the Ingenuity helicopter on NASA’s Perseverance rover. China’s prototype of its miniature helicopter shares a number of design features with Ingenuity, but is missing the solar panel visible at the top. Picture: NASA

The landing of China’s Mars rover in May began its first-ever mission on the planet, making it only the second country after the United States to get there. NASA’s Perseverance has been exploring Mars since February.

From the NASA rover, Ingenuity made its maiden flight in April, rising about 3m above the surface, marking humankind’s first ever successful deployment* of a powered aircraft in a world other than Earth. 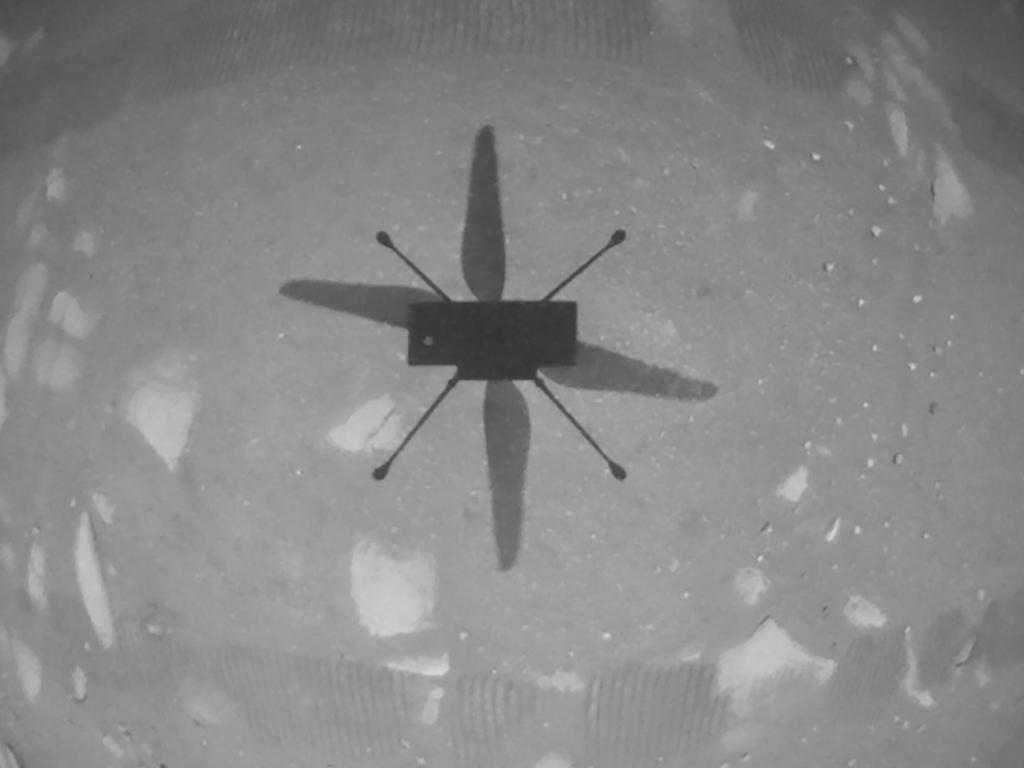 NASA’s Ingenuity Mars Helicopter captured as it hovered over the Martian surface on April 19, 2021, during the first instance of powered, controlled flight on another planet. Picture: AFP/NASA/JPL-Caltech

The challenge for the 1.8kg Ingenuity is the thin atmosphere on Mars, which is just 1 per cent as dense as Earth’s.

To compensate* for the lack of aerodynamic* lift, NASA engineers equipped the miniature helicopter with rotor blades that are larger – 1.2m tip to tip – and spin faster than would be needed on Earth for an aircraft of its size.

Like Ingenuity, the Chinese prototype has two rotor blades, a sensor-and-camera base and four thin legs. But there is no solar panel at the top like Ingenuity, according to the photograph.

Ingenuity has made more than 10 outings since April, covering an overall distance of more than 2 km with flight time of about 20 minutes in all.

China is planning a crewed maiden mission to Mars in 2033.

CLASSROOM ACTIVITIES
1. Scientific report
Write a fictional scientific report on the results of testing the rock samples brought back from Mars. You can be as creative as you like to make your report is interesting and fun to read!

2. Extension
Do you believe that there is currently life on Mars or has been in the past?

Write some reasons supporting your opinion.

VCOP ACTIVITY
I Spy Nouns
Nouns are places, names (of people and objects) and time (months or days of the week).