It’s time to rug up and look up at the night sky for a spectacular view of Jupiter.

Our solar system’s biggest planet is currently as close as it gets to Earth.

But that doesn’t mean you get to stay up past your bedtime, according to NASA’s Skywatch service.

“Jupiter is at its biggest and brightest this month, rising at dusk* and remaining visible all night,” NASA notes.

“The solar system’s largest planet is a brilliant jewel to the naked eye*.”

Stargazers need only glance up to catch a glimpse* of the solar system’s largest planet, without the need for any equipment other than your eyes. Jupiter and two of its moons are clearly visible in images captured by Voyager 2 in 1979. Picture: NASA/JPL

“Unlike stars, it won’t twinkle,” Dr Robert Massey, deputy executive director at Britain’s Royal Astronomical Society, told news service CNN. “Even when it’s low down, it will look pretty steady, and that will make it stand out. You’ll need a good clear southern horizon to see it.”

For those with a telescope or just a pair of binoculars, four of Jupiter’s 79 moons — Io, Europa, Ganymede and Callisto — are also clearly visible. Four of Jupiter’s 79 moons are visible this month. Picture: iStock

We have the opportunity for the best views here in the southern hemisphere but people all over the world can enjoy the celestial* event.

Lucky viewers might also “glimpse a hint of the banded clouds” that surround the planet, NASA said.

On June 10, Jupiter was exactly in opposition, which means the orbits of Jupiter, Earth and the Sun were all directly in line. But it is still almost in opposition for about a month, so you haven’t missed out if you haven’t yet been outside stargazing. Backyard astronomer Anthony Wesley, from central Queensland, was praised for the epic* photos he captured of Jupiter’s Great Red Spot back in April. The spot is actually a storm that’s been raging on Jupiter for more than 200 years. With a camera mounted to his homemade telescope, Mr Wesley seems to have captured images of the storm unravelling.

“It’s been quite dramatic … (the images have been) showing the spot in a state that nobody’s ever seen before,” Mr Wesley told ABC. Amateur astronomer Anthony Wesley has a camera mounted to a homemade telescope to look at Jupiter. Picture: Stefan Postles

And if all that stargazing leaves you yearning* for a closer look, views from NASA’s Juno spacecraft (currently orbiting Jupiter) make Jupiter feel almost close enough to touch. 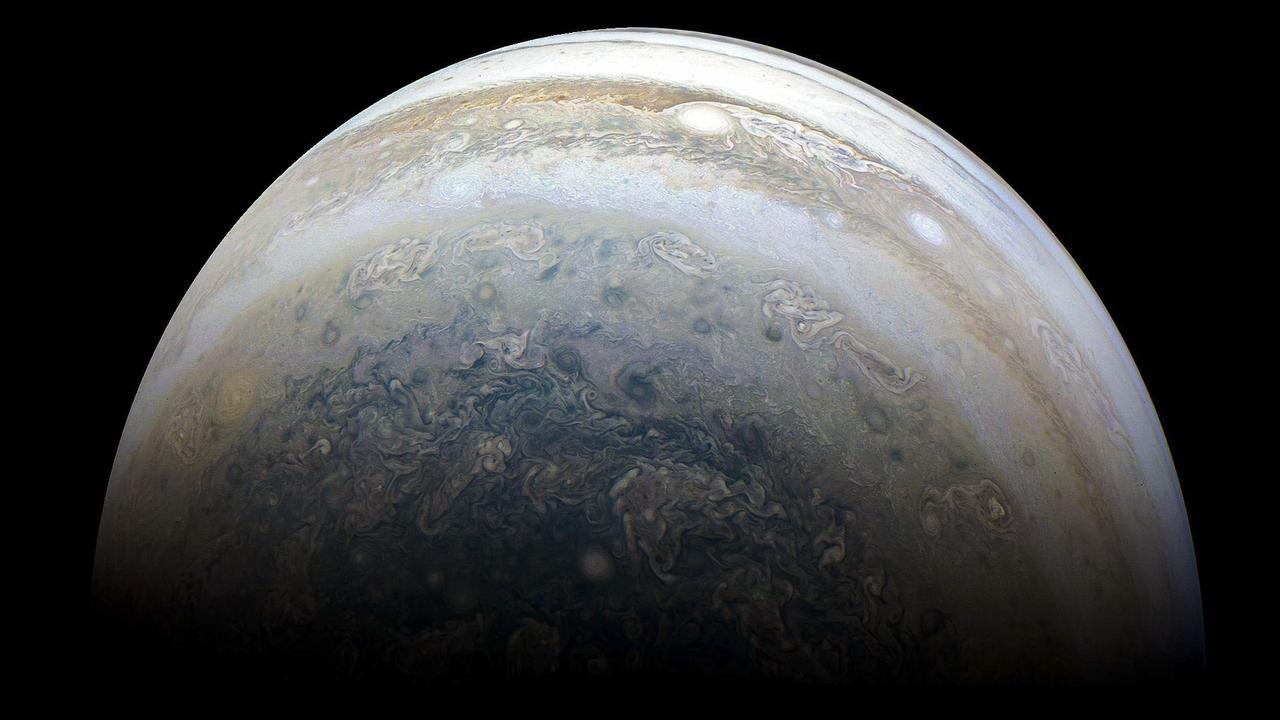 Jupiter is about 2.5 times the mass of all the other planets in the solar system combined.

OUR SOLAR SYSTEM
Scientists are constantly revising what they consider to be planets and dwarf planets. They are also frequently finding more dwarf planets. In 2006, scientists decided that Pluto was not a planet but a dwarf planet.

It’s hard to keep track of all the planetary discoveries but it’s also tricky to remember what’s where.

From the Sun, outwards, the main planets are:

PLANET MNEMONICS
A mnemonic (pronounced nem-on-ic) is a system for remembering something.

Some examples if you include Pluto are:

Some examples without Pluto are:

Voyager 2, Australia is listening to you

CLASSROOM ACTIVITIES
1. Name our Moon
Jupiter’s moons have been given special names. Callisto was a nymph from Ancient Greek mythology. Ganymede was a mythical hero. Think of a special name that you think our moon should have. Write the name, what it means and why you think that this is a great name for the Earth’s moon.

2. Extension
Write down the six most important facts about Jupiter you know from the story. Then, create three different mnemonics to help somebody remember them.

HAVE YOUR SAY: Have you seen Jupiter in the sky? Which planet do you think is the most interesting? Why?
No one-word answers. Use full sentences to explain your thinking. No comments will be published until approved by editors.