In a rocky Israeli crater, scientists simulate life on Mars Astronauts-in-waiting: members of the European-Israeli team walk in spacesuits during a training mission for planet Mars that simulates life on the red planet in Israel's southern Negev desert. Six astronauts will be cut off from the world for a month, only able leave their habitat in spacesuits as if they were on Mars. Picture: AFP

From the door of the expedition* base, a few small steps to the left an autonomous* rover passes by. A few giant leaps to the right is an array of solar panels. The landscape is rocky, hilly, tinged* with red. It resembles Mars – and with good reason.

Here in the Ramon Crater, in the desert of southern Israel, a team of six – five men and one woman – have begun simulating* what it would be like to live for about a month on the red planet. 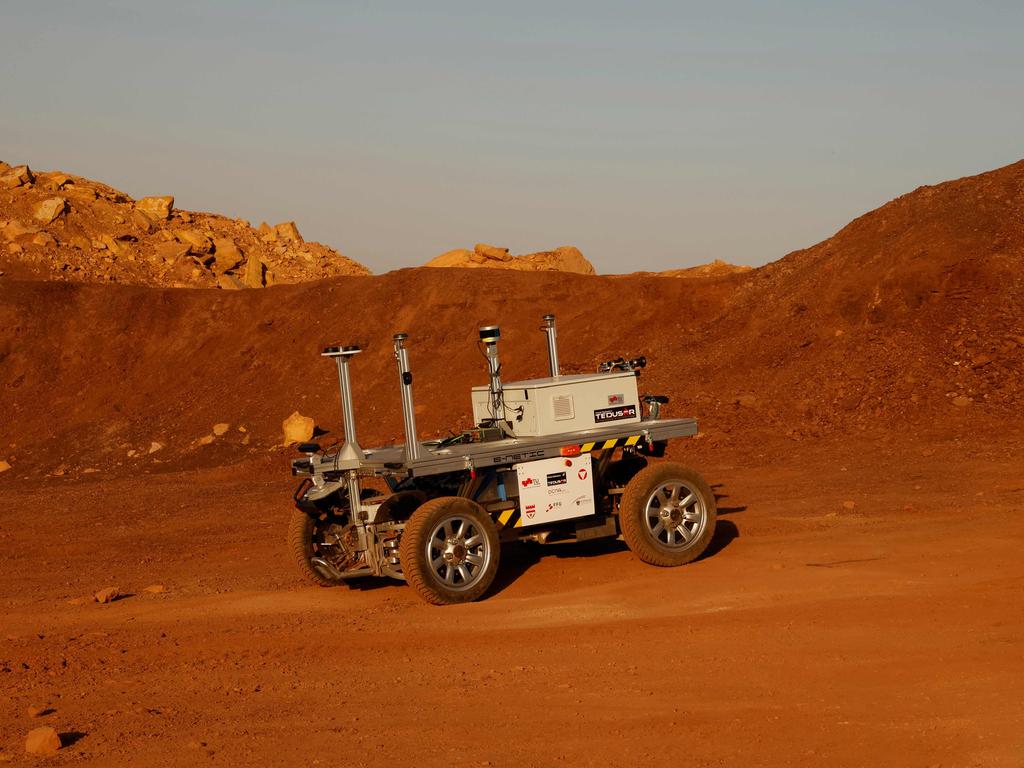 No simulation of life on Mars would be complete without a trusty robotic rover. The AMADEE-20 team has this rover hard at work in their Mars terrestrial analog, gathering data as they conduct experiments in the Israeli desert. Picture: AFP

Their AMADEE-20 habitat* is tucked beneath a rocky outcrop. Inside they sleep, eat and conduct experiments. Outside they wear mock spacesuits fitted with cameras, microphones and self-contained breathing systems.

“We have the motto of fail fast, fail cheap, and have a steep learning curve,” said director of the Austrian Space Forum, Dr Gernot Gromer. “Because for every mistake we make here on Earth, we hope we don’t repeat it on Mars.”

The Austrian association is running the project together with the Israel Space Agency and local group D-MARS.

A number of recent Mars probes have thrilled astronomy fans across the world, with robotic rovers like NASA’s Perseverance* and, for the first time, the helicopter Ingenuity*, offering a glance of the planet’s surface. But a manned mission is probably still more than a decade away.

With AMADEE-20, which was supposed to happen in 2020 but was postponed due to Covid-19, the team hopes to bring new insight that will help prepare for that mission, when it comes. Aerial view of the AMADEE-20 habitat, where astronauts from Europe and Israel are training for a mission to Mars at a simulation site in Israel’s southern Negev desert. The six astronauts are from Portugal, Spain, Germany, the Netherlands, Austria and Israel. Picture: AFP

“The habitat, right now, is the most complex, the most modern analog* research station on this planet,” said Dr Gromer, standing beside the 120 sqm structure shaped like two large, connected yurts*.

The six team members are constantly on camera, their vital signs monitored, their movements inside tracked to analyse favourite spots for gathering together. All this to better understand the human factor, Dr Gromer said.

Outside, other engineers and specialists work with a drone and rover to improve autonomous navigation and mapping on a world where GPS will not be available.

Altogether they will carry out more than 20 experiments in fields including geology*, biology* and medicine and the team hopes to publish some of the results when finished.

“We are six people working in a tight space under a lot of pressure to do a lot of tests. There are bound to be challenges,” said Alon Tenzer, 36, wearing the spacesuit that carries some 50kg of equipment. “But I trust my crew that we are able to overcome those challenges.” Israeli astronaut Alon Tenzer prepares his spacesuit before starting a training mission for planet Mars at a simulation site in the Israeli desert where scientists and astronauts will conduct experiments to help plan future human and robotic Mars exploration missions. Picture: AFP

NASA to shoot rocket at asteroid

CLASSROOM ACTIVITIES
1. Mars musings
Scientists – and the human race in general – seem to be fascinated by the red planet Mars and the question of whether we could ever inhabit it, or if life has ever existed on it.

Work with a partner and list the top five reasons that you think drive us to want to explore this planet:

2. Extension
The director of the Austrian Space Forum is quoted as saying, “We have the motto of fail fast, fail cheap, and have a steep learning curve.” In what context is he speaking? Do you think experiments like these could help prepare for more successful missions on Mars?

VCOP ACTIVITY
Imaginative Dialogue
Imagine you were there during the event being discussed in the article, or for the interview.