Apollo 11 astronauts Neil Armstrong and Edwin E. "Buzz" Aldrin, the first men to land on the moon, plant the US flag on the lunar surface. Picture: AP/NASA

A strange thing happened after astronaut Neil Armstrong and the Apollo 11 rocket crew returned from the moon with lunar* rocks — many of the mementos* given to every US state and 135 countries simply vanished.

Now, on the eve of the 50th anniversary of the famous landing when Armstrong became the first man on the moon, a former NASA investigator is close to locating all 50 of the moon rocks handed out in the US.

In recent weeks, two of the rocks that disappeared after the 1969 mission were located in Louisiana and Utah, leaving only New York and Delaware with souvenirs that are still missing. 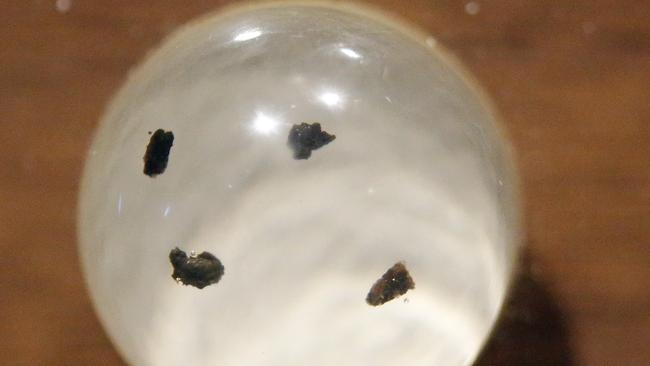 Some of the moon rocks encased in acrylic and mounted on a wooden plaque. Picture: AP

Attorney and moon rock hunter Joseph Gutheinz said it “blows his mind,” that the rocks were not carefully recorded and saved by some of the states that received them. But he is hopeful the last two can be located before the 50th anniversary of the Apollo 11 mission in July.

“It’s a tangible* piece of history,” he said.

“Neil Armstrong’s first mission … was to reach down and grab some rocks and dust in case they needed to make an emergency takeoff.”

US President Richard Nixon’s administration presented the tiny lunar samples to all 50 states and 135 countries. Each US state got a tiny sample encased in acrylic and mounted on a wooden plaque, along with the state flag. Some were placed in museums, while others went on display in state capitals. 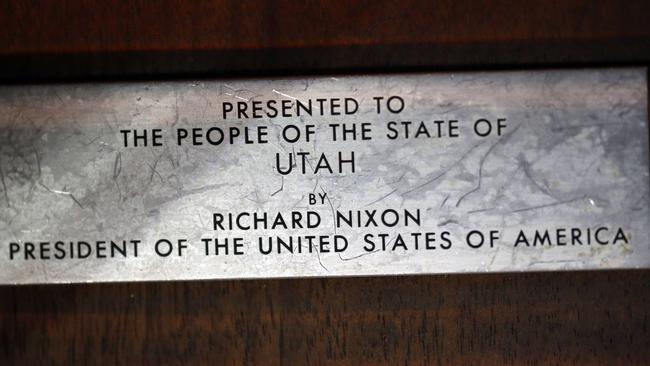 A plate mounted on a wooden plaque that holds the moon rocks. Picture: AP

But almost no state entered the rocks collected by Armstrong and fellow astronaut Buzz Aldrin into archival* records, and Mr Gutheinz said many lost track of them.

When Mr Gutheinz started leading the effort to find them in 2002, he estimated 40 states had lost track of the rocks.

“I think part of it was, we honestly believed that going back to the moon was going to be a regular occurrence*,” Mr Gutheinz said.

But there were only five more journeys before the last manned moon landing, Apollo 17, in 1972.

Of the Apollo 11 rocks given to other countries, about 70 per cent are missing, he said.

Mr Gutheinz began his career as an investigator for NASA, where he found illegal sellers asking for millions of dollars for rocks on the black market.

Authentic* moon rocks are considered national treasures and cannot legally be sold in the US, he said. 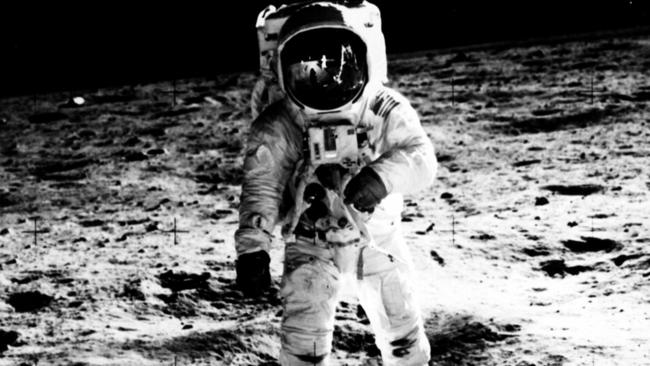 Neil Armstrong during his walk on the lunar surface of the moon in 1969. Picture supplied from NASA.

He became aware while at NASA that the gifts to the states were missing, but only began his hunt after leaving the agency. Now a lawyer in the Houston area, he’s also a university instructor who’s enlisted the help of his students. They now record their findings of the location of discovered moon gems in a database.

Many of the Apollo 11 rocks have turned up in unexpected places: with ex-governors in West Virginia and Colorado, in a military history storage building in Minnesota and with a former crab boat captain from the TV show Deadliest Catch in Alaska. 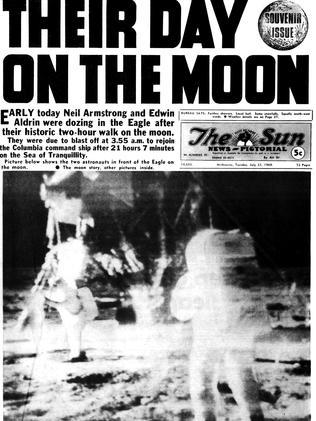 Moon landing in The Sun newspaper. 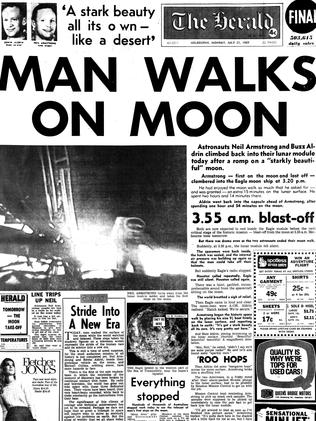 Front page of The Herald.

The two missing rocks are a bit more of a mystery. In New York, officials who oversee the state museum have no record of that state’s Apollo 11 rock.
In Delaware, the sample was stolen from its state museum on September 22, 1977. Police were contacted, but it was never found.

Mr Gutheinz said he hoped to see all the moon rocks on display next year to celebrate 50 years since the moon landing.

“The people of the world deserve this,” he said. “They deserve to see something that our astronauts accomplished and be a part it.”

lunar: from or relating to the moon

mementos: souvenirs to remember an event

tangible: something you can touch

1. Who were the two astronauts on Apollo 11 that walked on the moon?

2. How many US states and other countries received moon rocks?

3. What were the moon mementos mounted on?

4. How much were illegal sellers offering moon rocks for on the black market?

5. Why hasn’t the Delaware moon rock been found?

Create a MISSING poster for the remaining moon rocks. Include details such as; where they came from, who they were given to, why they are important, last known whereabouts, what they look like, likely places they might be found and who to contact if you know where they are. You can include any other information you deem important. Include a picture of the rocks.

Extension: Design how you would display the moon rocks if you were the curator of a museum. Write an information card with details of what is in the display and its historical and scientific significance. Include; where it came from, who collected it and when it was collected. Also include how it came to be in the museum. Explain why it is an important artefact.

HAVE YOUR SAY: What would you like to know more about on the topic of the moon landing? Use full sentences. No one-word answers.