This new photo of Jupiter was taken by the Hubble Space Telescope. Picture: NASA

NASA’s Hubble Space Telescope has photographed a massive storm swirling above the surface of Jupiter.

The storm, called the Great Red Spot, is wider than Earth, with ferocious* winds reaching speeds of 684kmh.

The image was captured on June 27 this year but experts believe the storm has been raging for hundreds of years — possibly as early as 1665, and definitely as early as 1830.

The sweeping bands are created by differences in thickness and height of ice clouds made of ammonia*.

But the most exciting feature is the Great Red Spot.

This enormous storm has a diameter* around 16,350km and rotates fully every six Earth days.

“The Great Red Spot is a towering structure shaped like a wedding cake, whose upper haze layer extends more than 3 miles (4.8km) higher than clouds in other areas,” NASA explained. 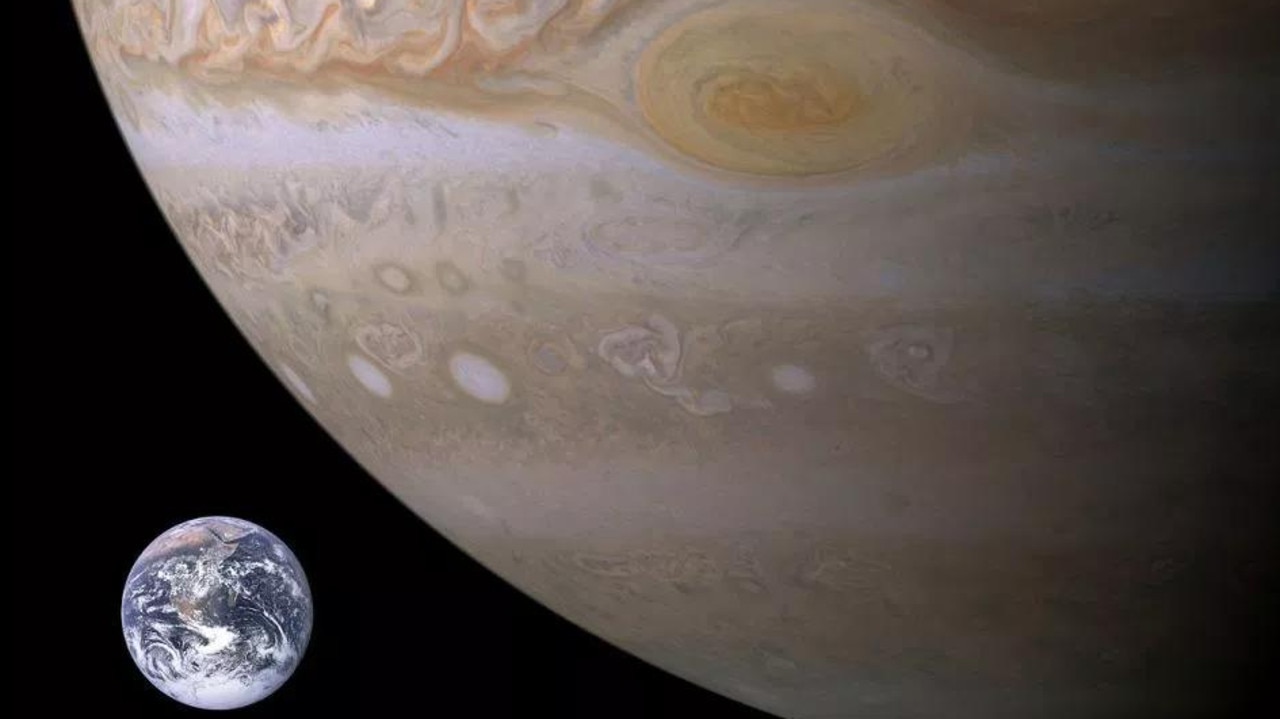 Compare the size of the Great Red Spot (at the top) to Earth (at the bottom). Picture: NASA

“The gigantic structure, with a diameter slightly larger than Earth’s, is a high-pressure wind system called an anticyclone that has been slowly downsizing since the 1800s.

“The reason for this change is still unknown.”

Astronomers believe that the Great Red Spot is the largest storm in the Solar System. 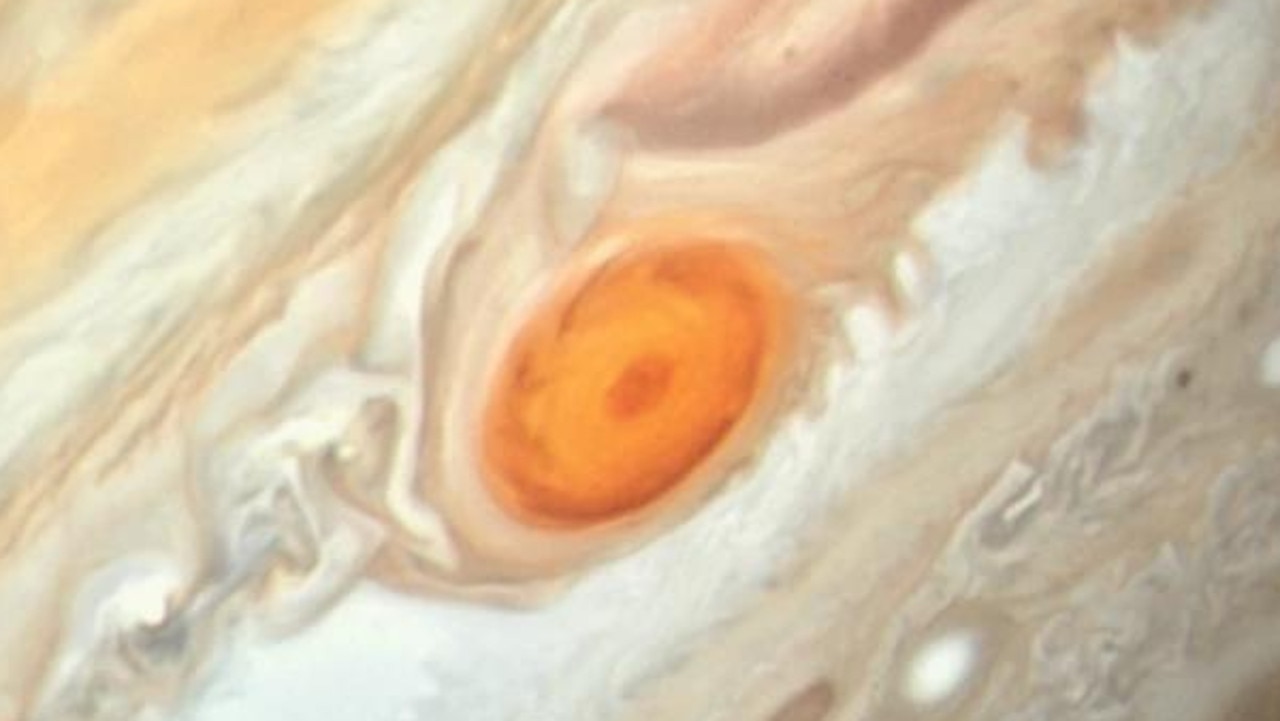 The huge storm on Jupiter is 1.3 times wider than Earth. Picture: NASA

And it can vary wildly in colour, from almost brick-red to white.

Scientists can’t agree on exactly what causes the formation* or colour of the Great Red Spot.

However, they believe it has lasted for so long because there’s no planetary surface such as rock or soil or water to slow it down.

Jupiter is mostly made up of gas with a liquid hydrogen core. HOW FAR AWAY IS JUPITER?
At the closest point in their own orbits, Jupiter and Earth are around 587 million kilometres apart.

But because neither planet spins around the Sun in a perfect circle, nor at the same speed, this distance varies a lot.

When they are furthest away from each other the planets are 967 million kilometres apart.

While we travel around the Sun we catch up with Jupiter once every 399 days, causing the gas giant to appear to travel backwards in the night sky.

VIDEO: This 2018 animation from NASA shows Jupiter’s north pole and the cyclones swirling there. The yellow colours show heat (up to -13C), the darker colours show cooler areas (down to -83C). Source: Storyful

WHAT IS THE HUBBLE SPACE TELESCOPE?
The Hubble Space Telescope takes photos while in space.

It was launched into a low-Earth orbit in 1990.

The advantage of Hubble over a telescope on the ground on Earth is that it takes photos from outside of Earth’s atmosphere.

This means distortion* from the atmosphere is removed, allowing for more accurate images.

NASA’s Hubble has captured some of the most detailed images of space ever recorded.

The Hubble telescope was also able to accurately determine the rate at which the universe is expanding. Hubble is the only telescope designed to be serviced by astronauts in space.

Five missions have been launched to repair, upgrade or replace parts of the Hubble telescope.

Though it is believed that the Hubble telescope could continue working until 2040, its successor* — the James Webb Space Telescope — is already set for launch in March 2021.

This story was originally published in The Sun and was reproduced here with permission.

Jupiter, the brilliant jewel in our night sky

CLASSROOM ACTIVITIES
1. Jupiter maths
Answer the following maths problems from the story on the storm on Jupiter. Record how long it takes you to solve and compare with your classmates to see who got the fastest time.

2. Extension
A category 5 cyclone in Australia has winds greater than 250 kilometres an hour. Think about the damage that causes to infrastructure and the landscape. The storm on Jupiter has wind speeds of up to 684 kilometres an hour. In your opinion, what sort of destruction would that cause to the area you live? Describe in detail what would be affected.

How many proper nouns can you find within your reading?  Find them all and sort them into the category of name, place, time (date/month).

HAVE YOUR SAY: Which is your favourite planet in our Solar System? Which would you like the Hubble Space Telescope to photograph? Why?
No one-word answers. Use full sentences to explain your thinking. No comments will be published until approved by editors.