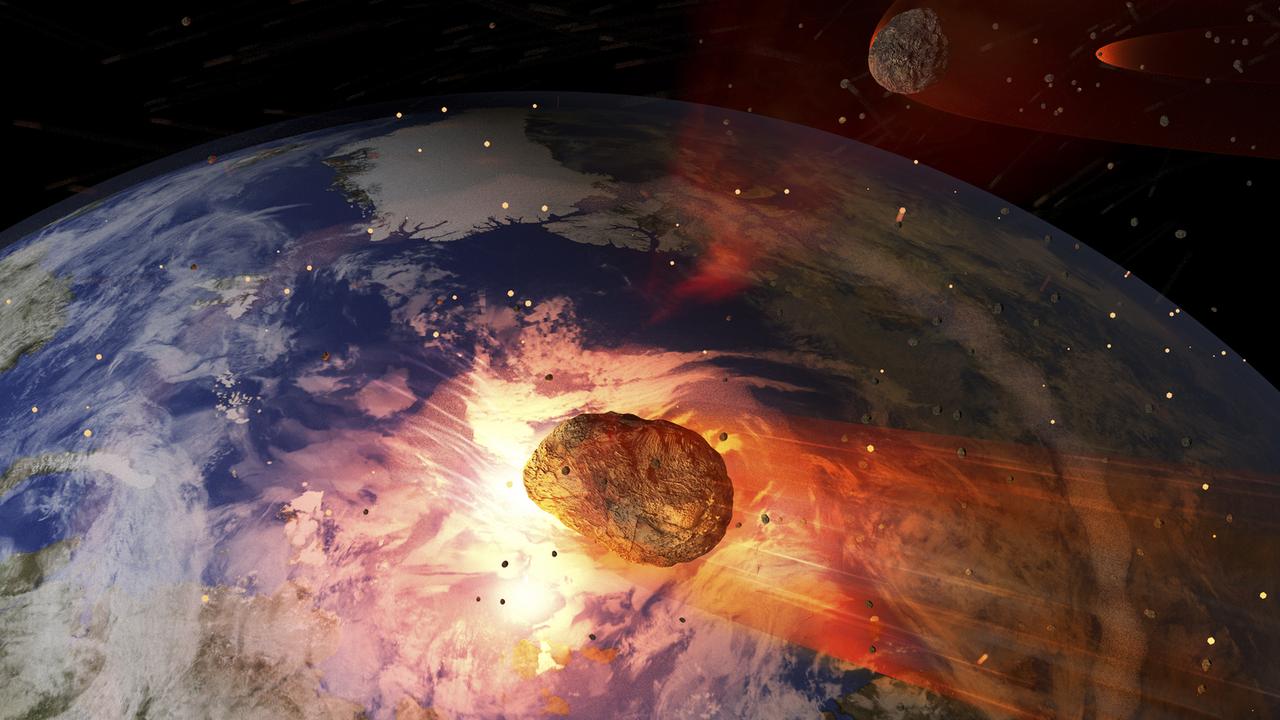 An illustration of a large asteroid heading towards Earth. Thankfully, NASA has ruled out this happening for at least the next 100 years with the asteroid Apophis. Picture: NASA

Phew, now here’s some good cosmic* news: NASA has given Earth the all clear for the next century* from a particularly menacing* asteroid.

The space agency has announced that new telescope observations have ruled out any chance of Apophis crashing into Earth in 2068.

That’s the same 340m space rock that was supposed to come frighteningly close in 2029 and again in 2036.

NASA ruled out any chance of a strike during those two close approaches a while ago. But a potential 2068 collision still loomed*.

“A 2068 impact is not in the realm* of possibility anymore, and our calculations don’t show any impact risk for at least the next 100 years,” said Davide Farnocchia of NASA’s Center for Near-Earth Object Studies. The Green Bank Telescope in West Virginia, in the US, which was used to receive the radar observations of Apophis. Photo: Martin George The radar images of Apophis show it is a long asteroid and also that there is no chance of a collision for at least the next century. Picture: NASA/JPL-Caltech/NSF/AUI/GBO

Scientists were able to refine* their understanding of Apophis’ orbit around the sun thanks to radar observations in March, when the asteroid passed within 17 million kilometres of Earth.

“When I started working with asteroids after college, Apophis was the poster* child for hazardous* asteroids,” Mr Farnocchia said.

“There’s a certain sense of satisfaction to see it removed from the risk list.”

Asteroid could be Moon’s long-lost twin

CLASSROOM ACTIVITIES
1. Asteroid Risk
Luckily NASA has given the all clear for any asteroid coming too close to earth within the next 100 years, however if it was possible that an asteroid was going to strike in the coming years, what could we do as a global population to try and prepare?

Work with a partner and brainstorm a list of how you could work together with other countries to try and save the Earth.

2. Extension
What other potential risks does Earth face from Space and other hazards around the globe? List them below and rate each one as impossible,  possible, unlikely or likely.