The space hotel could be open as early as 2025 and will be a rotating wheel 190m in diameter. Picture: The Gateway Foundation

Pack your bags and ask the neighbours to feed the dog: you could be off to a space hotel for a holiday by 2025.

Designs have been revealed for the Von Braun Rotating Space Station, a hotel for 100 space tourists a week.

The orbiting space hotel will have facilities you find in top hotels on Earth, including restaurants and a cinema, plus equipment and room to play sport, such as Quidditch, low-gravity basketball and space trampolining.

Space hotel could be open for business by 2025

The project is by a group of space enthusiasts* called The Gateway Foundation. The hotel is one of a series of incredible ideas the foundation has, including first figuring out how to build in space and, eventually, a low-orbit space city.

The projects will further develop what we have learned in 20 years of building, operating and maintaining the International Space Station (ISS).

However, instead of being used for scientific purposes, the hotel will be more like an orbiting cruise ship.

Within the 190m-diameter, wheel-shaped building will be full kitchens, restaurants and cafes, movie screenings, and even interiors that are nice to look at and be in, unlike the utilitarian* ISS. 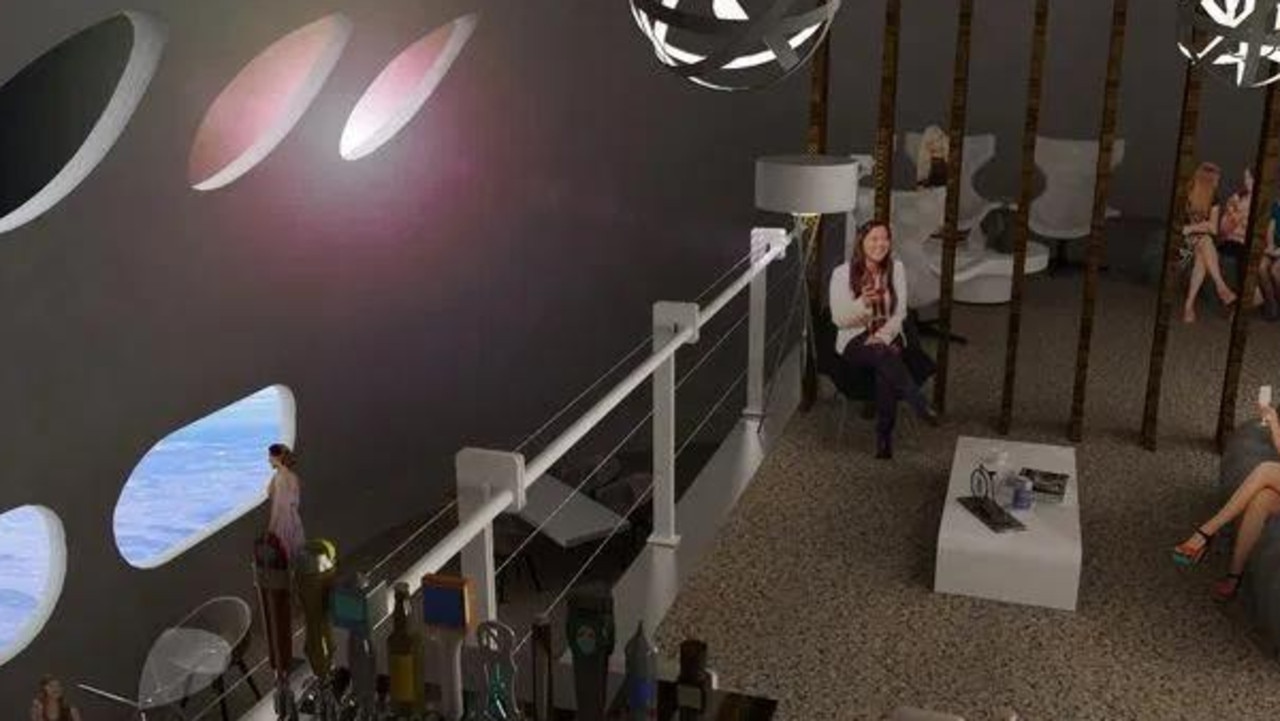 Guests will be able to relax and eat in hotel-style spaces. Picture: The Gateway Foundation

“Eventually, going to space will be just another option people will pick for their vacation, just like going on a cruise, or going to Disney World,” Tim Alatorre, senior design architect of the Von Braun, told design website Dezeen.

The wheel will rotate so it creates its own gravity.

Most areas of the hotel will initially have about one sixth of Earth’s gravity — similar to the Moon — which means guests will be able to eat regular food, wash and go to the toilet pretty much as they would on Earth. 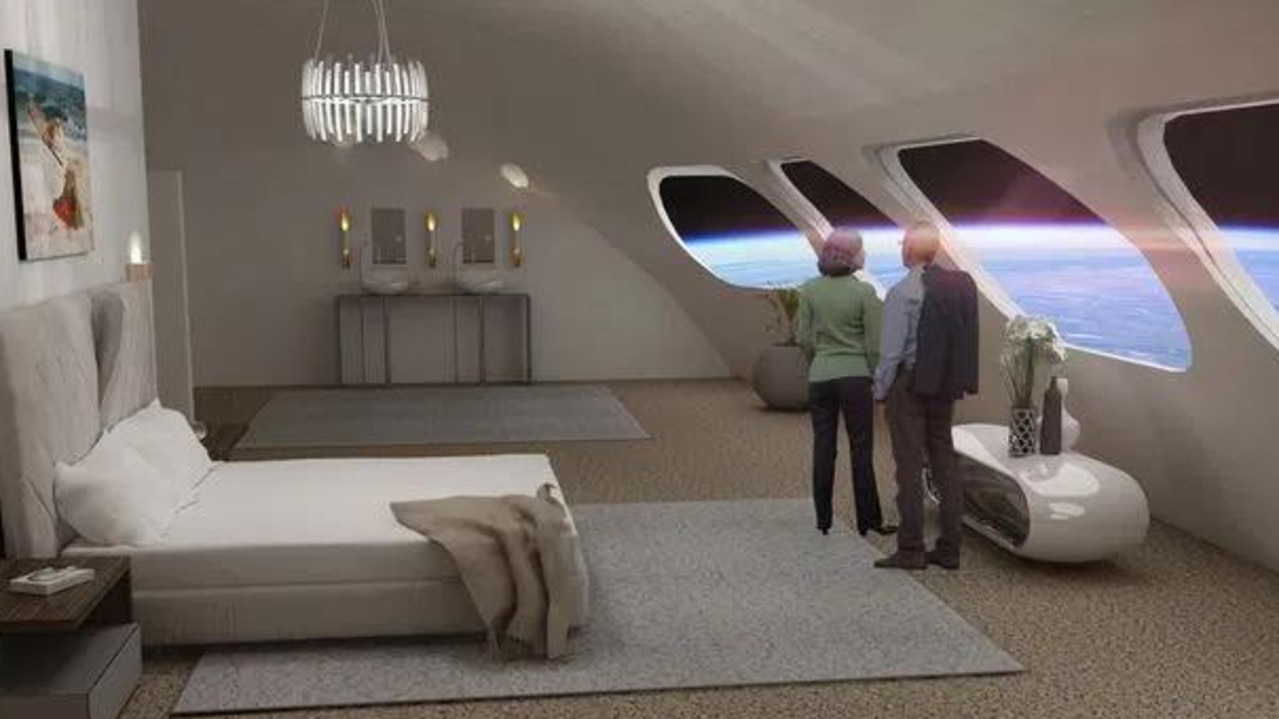 Unlike the International Space Station, interiors will be nice to look at and be in. Picture: The Gateway Foundation

Other parts will have near-zero gravity, where people can play low-gravity basketball (for easier slam dunks), do low-gravity trampolining (for catching serious air) and play Harry Potter’s favourite sport, Quidditch (which requires flight). Shaquille O’Neal reacts as Hamidou Diallo of the Oklahoma City Thunder dunks over him during the 2019 NBA All-Star Weekend in February. Ordinary humans could do this on low-gravity basketball courts in space. Picture: Getty Images

The materials used to construct the station will be sent into orbit, then assembled with the help of drones and robots.

The Gateway Foundation’s goal is to have a second station in orbit by 2030, which would house at least 500 people permanently living in space and a total of 200 visitors weekly — totalling more than 10,000 space tourists a year.

The price of a space hotel visit is not yet known but is likely to be expensive for the first few years.

However, the foundation would like a range of people to visit, rather than just the super rich. Mr Alatorre told Dezeen it is “developing programs that will give people with average incomes the ability to win or buy discounted tickets and spend a week in space.” 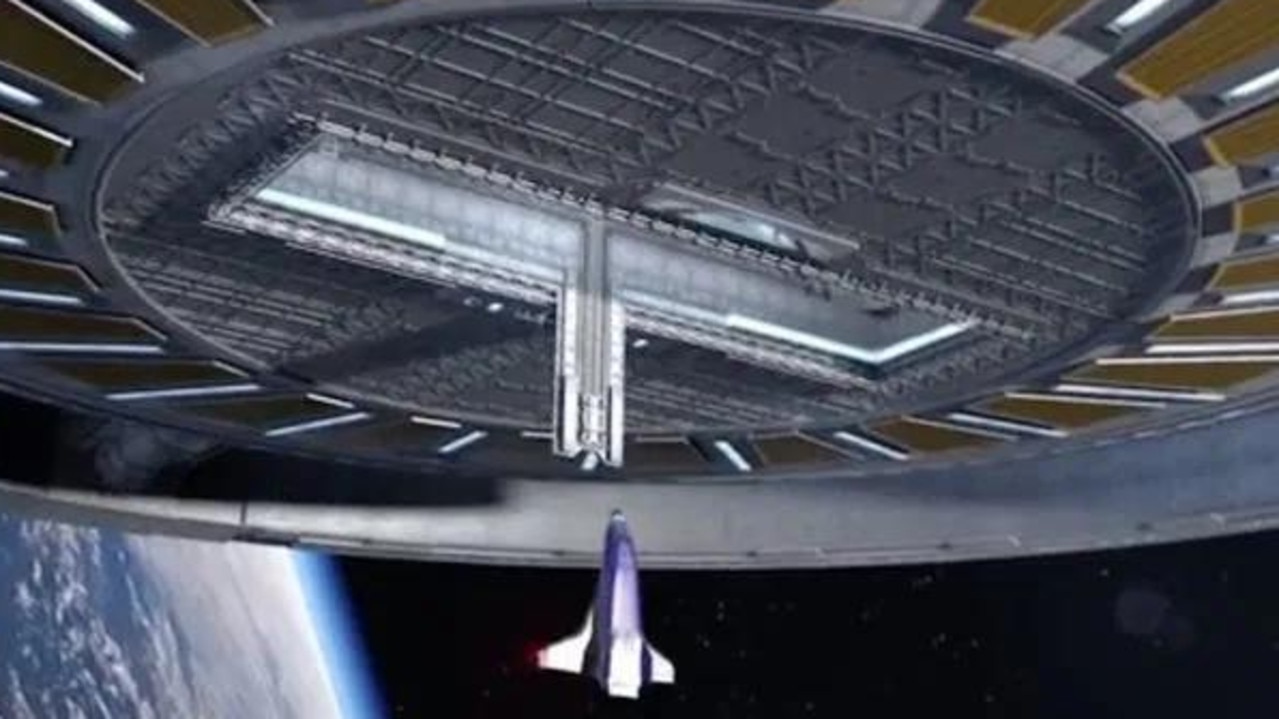 Guests will arrive at the space hotel by space shuttle. Picture: The Gateway Foundation In the first stage of the space hotel, there would be one space dock for the shuttle and for delivering supplies. Picture: The Gateway Foundation

This article was first published in the New York Post and is reproduced here with permission.

Welcome to your future life

CLASSROOM ACTIVITIES
1. Holiday itinerary
An itinerary is a daily plan or a timetable of things to do on a holiday. Write an itinerary for a fantastic three-day holiday on the space station.

2. Extension
The Gateway Foundation is trying to work out how to build in space. List all of the problems, or the challenges that you think they have to solve, in order to build a city in space.

A good way to find a syllable is to clap as you speak.

HAVE YOUR SAY: Would you holiday in a space hotel?
No one-word answers. Use full sentences to explain your thinking. No comments will be published until approved by editors.