The Hubble Space Telescope has reached its 30th year in orbit and NASA is celebrating along with fans all over the world.

Over the past three decades the telescope has been beaming amazing images of space back to Earth.

The images and information Hubble has collected so far have changed and improved our understanding of the universe.

As part of the birthday celebrations, NASA has launched a web page that allows you to see a photo the telescope took on your birthday.

Here are some of Hubble’s best photos. Which is your favourite?

EXPLODING STARS
This image below is of the remains of a huge, ancient supernova*.

Every so often, large stars collapse from vast clouds, igniting and creating heavy elements in their cores.

After a few million years, this material is blasted out into interstellar space – beginning star formation all over again.

The expanding debris cloud named Cassiopeia A is a great example of this, taking place nearly 12,000 years ago. 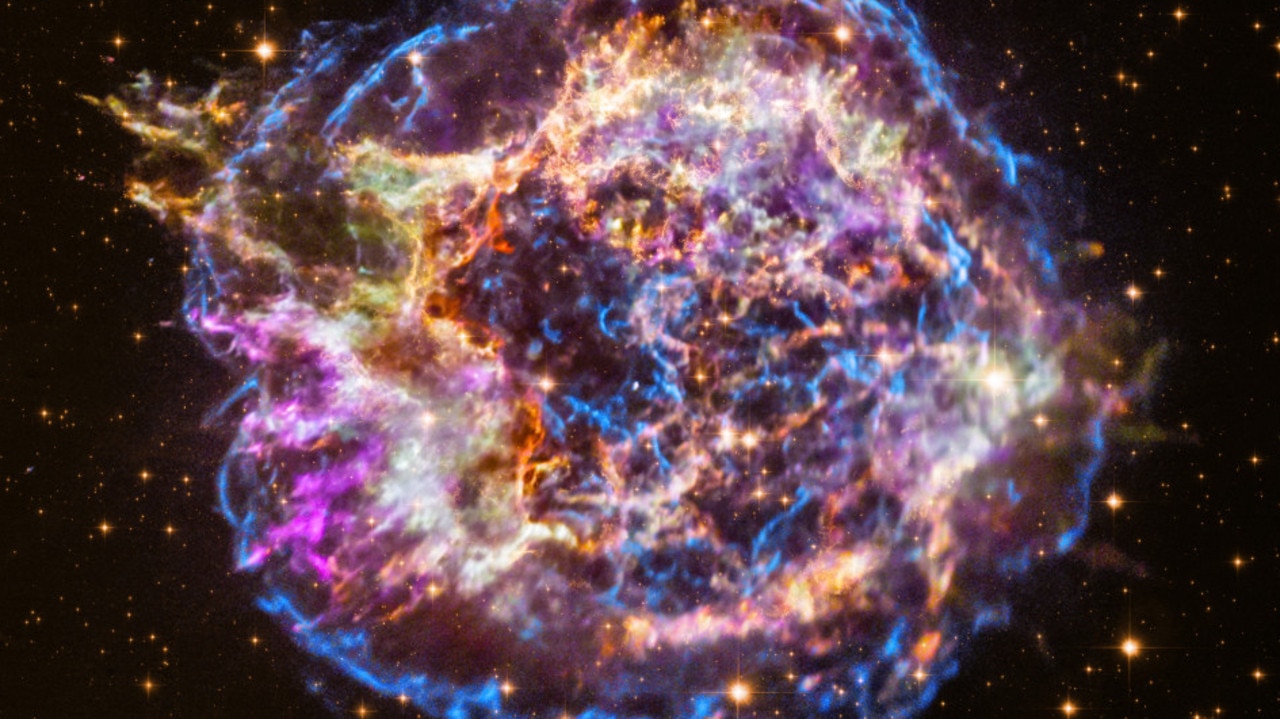 A view of the aftermath of a colourful stellar explosion. Picture: NASA

A GALAXY FAR, FAR AWAY
Below is Triangulum, a 40 billion-star galaxy and one of the most distant objects that can be seen from Earth.

NASA said the photo is the most detailed image yet of the neighbouring object, which sits three million light-years* from the Milky Way. The nearby Triangulum galaxy is packed with 40 billion stars. Picture: NASA/ESA

JUPITER STORMS
This stunning photo of Jupiter clearly shows an enormous “mega-storm” swirling above the surface.

The so-called Great Red Spot is wider than the Earth, with winds reaching 684kmh. The storm is the orange/red spot near the centre.

GALAXY OPTICAL ILLUSION
Astronomers spotted a galaxy in the distant universe that appears duplicated on the night sky at least 12 times.

The unusual sight was captured using the NASA/ESA Hubble Space Telescope and could give scientists a better understanding of the early universe.

The galaxy appearing multiple times in the image has been nicknamed the Sunburst Arc. ASTEROID PHOTOBOMB*
The telescope even captured this stunning galactic* “photobomb” that shows an asteroid streaking past the Crab Nebula.

The original image was uploaded in black and white, but volunteer astronomer Melina Thévenot converted it to colour. The galactic “photobomb” that shows an asteroid streaking past the Crab Nebula.

‘GHOSTLY FACE’
This ghostly face was pictured staring back at us from deep space.

It’s actually a rare image of a galactic collision. This image of a “ghostly face” was released just days before Halloween. Picture: ESA/Hubble

MYSTIC MOUNTAIN
This snap shows a chaotic three-light-year-tall pillar of gas and dust.

It lies within the Carina Nebula, which is around 7500 light-years away. 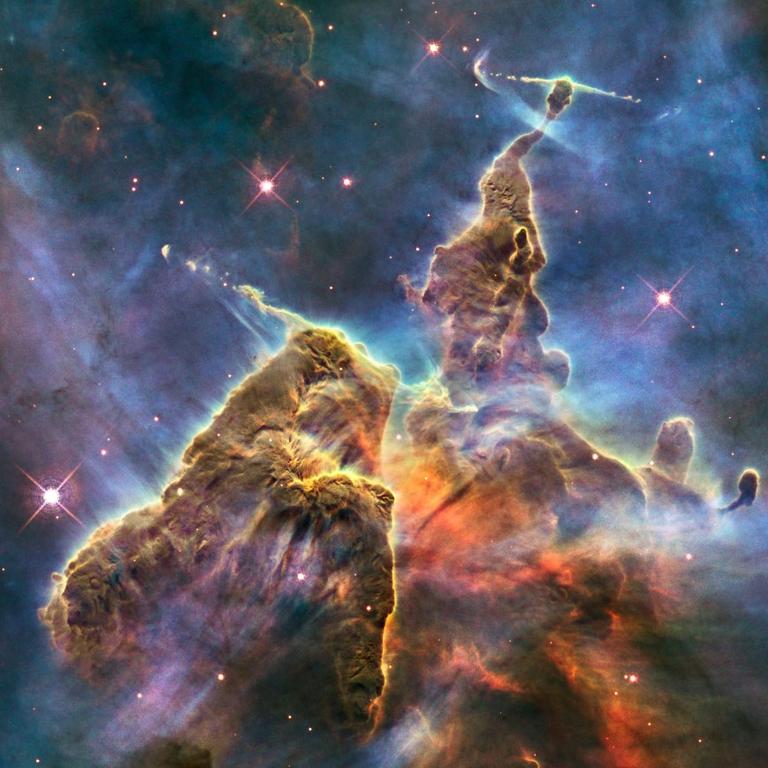 The chaotic three-light-year-tall pillar of gas and dust. Picture: NASA

HORSEHEAD NEBULA
This snap was captured by the telescope in 2013.

It’s thought that this Nebula has about five million years left before it disintegrates*. WHIRLPOOL GALAXY
The ‘Whirlpool galaxy’ got its nickname because of its swirling structure.

Its arms are referred to as star-formation factories because hydrogen gas is said to be compressed in these regions and makes new star clusters. 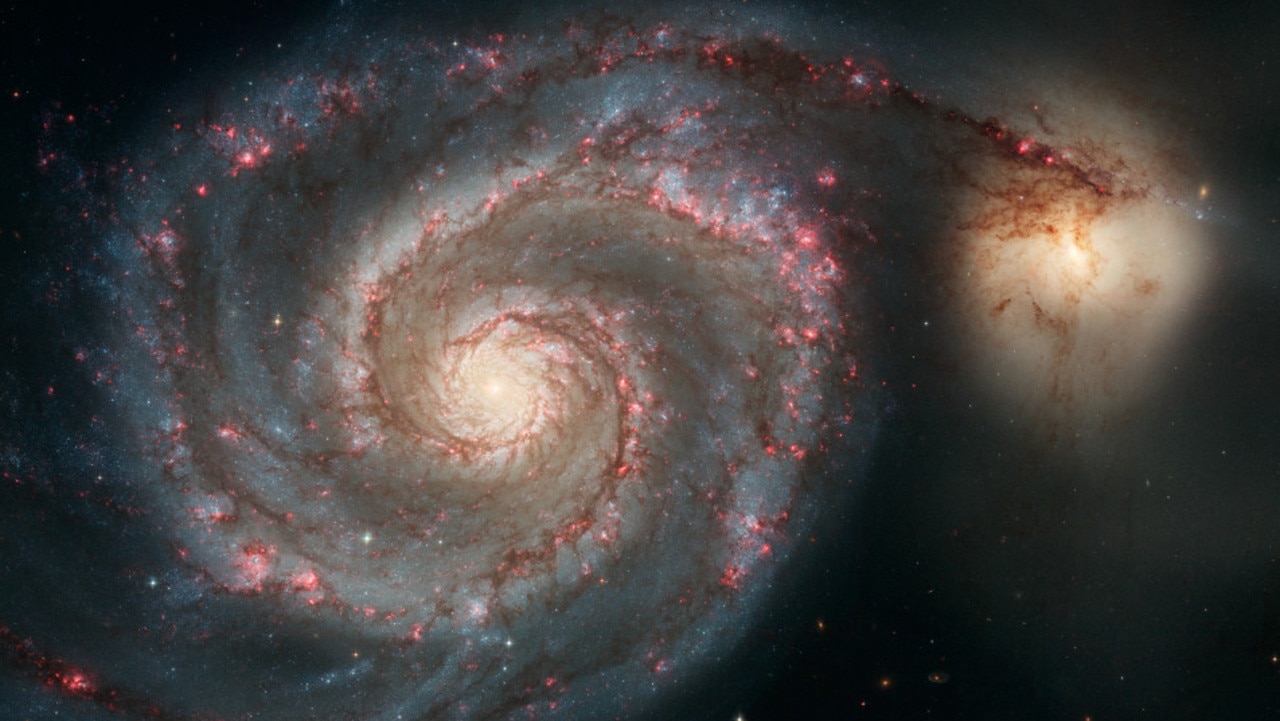 It was launched into a low-Earth orbit in 1990.

The advantage of Hubble is that it takes photos from outside of Earth’s atmosphere, which means distortion from the atmosphere is removed, so images are more accurate.

NASA’s Hubble has captured some of the most detailed images of space ever recorded.

Hubble was also able to accurately determine the rate at which the universe was expanding.

Hubble is the only telescope that was designed to be serviced by astronauts in space.

Five different missions have been launched to repair, upgrade or replace parts of the Hubble telescope.

It’s believed that the Hubble telescope could continue working until 2040.

Its successor – the James Webb Space Telescope – is set for launch in March 2021.

2. Extension
Visit the NASA website to see the photos taken on your birthday. With parent/guardian permission, copy and paste the following link into your search engine.

Scroll down until you find the boxes that say SELECT MONTH and SELECT DATE. Input your birthdate and click submit.

Look at the photo taken on your birthday. What are your first impressions? What does it remind you of?

Look up some other photos taken on your family members birthdays. How would you describe these photos?

HAVE YOUR SAY: Which is your favourite Hubble image?
No one-word answers. Use full sentences to explain your thinking. No comments will be published until approved by editors.