Call for greater investigation as hundreds of UFO sightings confirmed Naval Intelligence deputy director Scott Bray explains a video of an unidentified aerial phenomena (UAP) during a rare public hearing by the US Congress into UFOs and the possibility of alien life. Picture: Getty Images/AFP

Hundreds of unidentified flying objects have been observed by military personnel over decades and warrant* further investigation, a rare public hearing by the US Congress has heard.

Congress, which is America’s parliament, held the first public hearing in more than 50 years into UFOs and the possibility of alien life.

The May 17 meeting of the House of Representatives intelligence committee heard from top Pentagon* officials about their investigations into sightings of unidentified aerial phenomena* (UAP), the official term for what are more widely known as UFOs. These sightings included 144 that were documented between 2004 and 2021.

“We know that our service members have encountered unidentified aerial phenomena,” said undersecretary of defence for intelligence and security Ronald Moultrie.

“We are committed to an effort to determine their origins”. Undersecretary of defence for intelligence and security Ronald Moultrie testifies before the House of Representatives intelligence committee. Picture: Getty Images/AFP

Two senior defence officials, who throughout stressed the potential national security threat of UAP, showed committee members a video of small triangular objects in the sky, and another of an unidentified object zooming past an F-18 fighter jet, as examples of the sorts of strange phenomena they couldn’t explain.

The officials said US pilots had almost collided with UFOs at least 11 times. 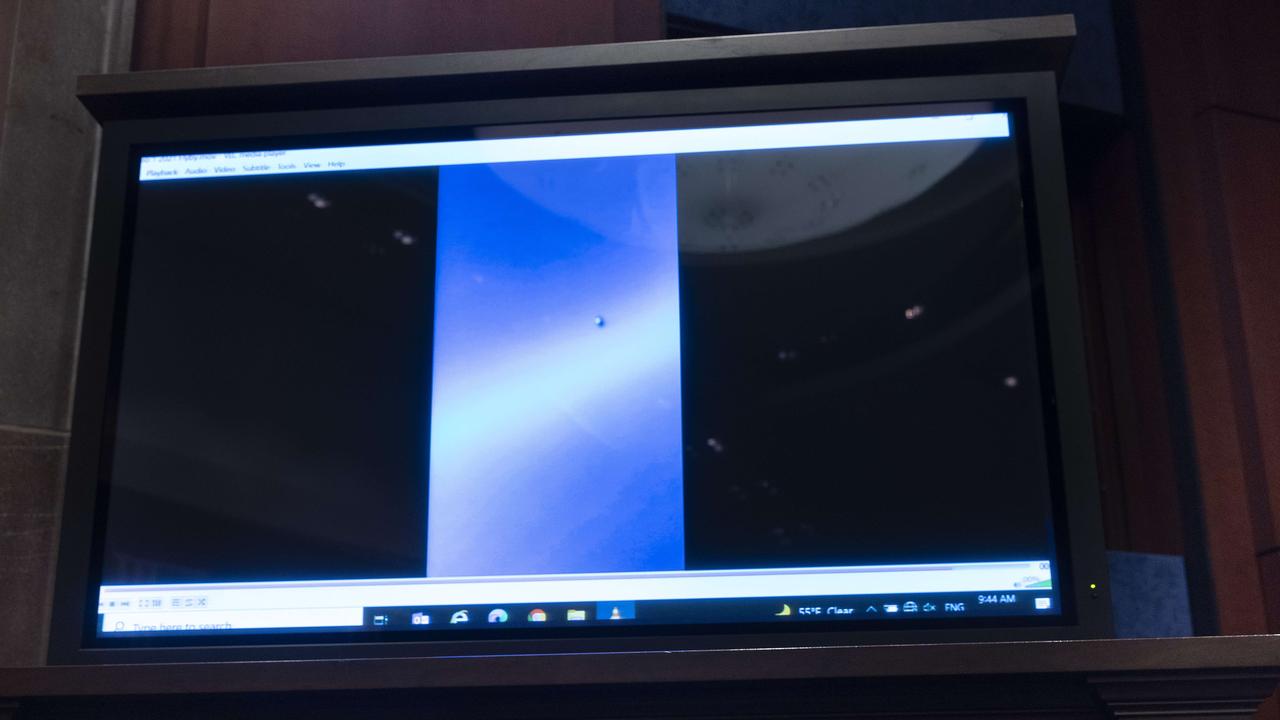 A video of unidentified aerial phenomena (UAP) is played to the House of Representatives intelligence committee. Picture: Getty Images/AFP

The chairman of the committee, Andre Carson, said the “stigma*” associated with reporting UAP sightings had hobbled* reporting and analysis efforts.

“Pilots avoided reporting or were laughed at when they did. Defence department officials relegated* the issue to the back room, or swept it under the rug entirely, fearful of a sceptical* national security community,” he said.

“Today, we know better. UAPs are unexplained, it‘s true. But they are real. They need to be investigated. And any threats they pose need to be mitigated*.”

The hearing, which included a private session not open to the public, reflected efforts by some in the US defence and intelligence community to share more information with the public about UAP sightings, and follows release of a short report on UAP in June last year by the US intelligence services.

That report left open the possibility UAPs could be “breakthrough aerospace technology” developed by Russia or China, rather than signs of alien life.

In November last year the US defence department established the Airborne Object Identification and Management Synchronization Group to “synchronise* efforts” to “detect, identify and attribute* objects of interest”. The US navy established a standardised* reporting for UAP in 2019.

A UK government study, conducted from 1997 to 2000 and known as the Condign report, found the existence of UAP was “indisputable*”.

“Several aircraft have been destroyed and at least four pilots have been killed chasing UFOs,” the report said, referring to information the authors had obtained from Soviet, Russian and Chinese research programs.

The French government, which has been investigating UAP for decades, declassified* its own research last year, concluding “their reality is indisputable even if hoaxes exist”.

Beacon to send out message to aliens

CLASSROOM ACTIVITIES
1. Ask the questions
Imagine that you are part of the intelligence committee investigating UAPs. Write five questions that you would ask the top defence officials. The purpose of your questions are to help you understand what the UAPs really are and to find ways to encourage pilots to speak up when they see one.

2. Extension
Why do you think so much information about UAPs has been classified, or kept secret? Write sentences explaining your ideas.