By 2026, NASA plans to launch an advanced drone called Dragonfly to explore Titan to see if it could support life This drawing shows multiple views of the Dragonfly lander that would take advantage of the atmosphere on Saturn's moon Titan to explore multiple locations, some hundreds of kilometres apart. Picture: NASA via AP

NASA is sending a dragonfly into space so we can look around Saturn’s largest moon to see if humans or some form of life could live there.

The US space agency has announced it has a team working hard on an incredibly advanced drone — called Dragonfly — to send to explore Titan.

Using propellers, the drone will fly and land on several spots on the icy moon to study whether it can support microbial* life. An artist’s illustration of what the surface of Saturn’s largest moon Titan could look like.

The nuclear-powered mission is part of NASA’s competitive New Frontiers program. This was the same program that launched the New Horizons spacecraft that became the first to visit dwarf planet Pluto.

Dragonfly was the winning entry of several proposed projects, including one that involved a mission to collect samples from a nearby comet.

NASA plans to launch the drone in 2026 and for it to arrive at Titan in 2034. It is hoped it will land on some of Titan’s dunes and later on a crater.

NASA to send a drone to land on Titan

The cost of preparing for this mission is capped* at just more than $1.2 billion.

“What really excites me about this mission is that Titan has all the ingredients needed for life,” said Lori Glaze, director of NASA’s planetary science division.

Titan is a haze-covered world with a thick atmosphere. The Cassini spacecraft recorded this image of Titan, which is normally hidden by a thick, hazy atmosphere. The bright, continent-sized feature known as Xanadu is near picture centre, bordered at the left by contrasting dark terrain. Picture: NASA

The moon has lakes of methane*, mountains of ice and an ocean below the surface, making it an attractive place to explore to check out whether its environment can support primitive* life.

“We are absolutely thrilled, and everyone is just raring to go and take the next steps in exploring Titan,” said project leader Elizabeth Turtle of Johns Hopkins University Applied Physics Laboratory in the US.

Titan was last studied by the international Cassini-Huygens mission. In 2017, the Cassini spacecraft plunged into Saturn, ending 20 years of exploration.

Is there life on Saturn's moons?

If Titan wasn’t orbiting Saturn, scientists would call it a planet as it is larger than Mercury.

It is covered in a thick atmosphere that could be similar to what Earth’s atmosphere was like when Earth was younger.

Its surface temperature is -179C.

Titan was discovered in 1655 by Dutch mathematician and scientist Christiaan Huygens, who also invented the pendulum* clock. 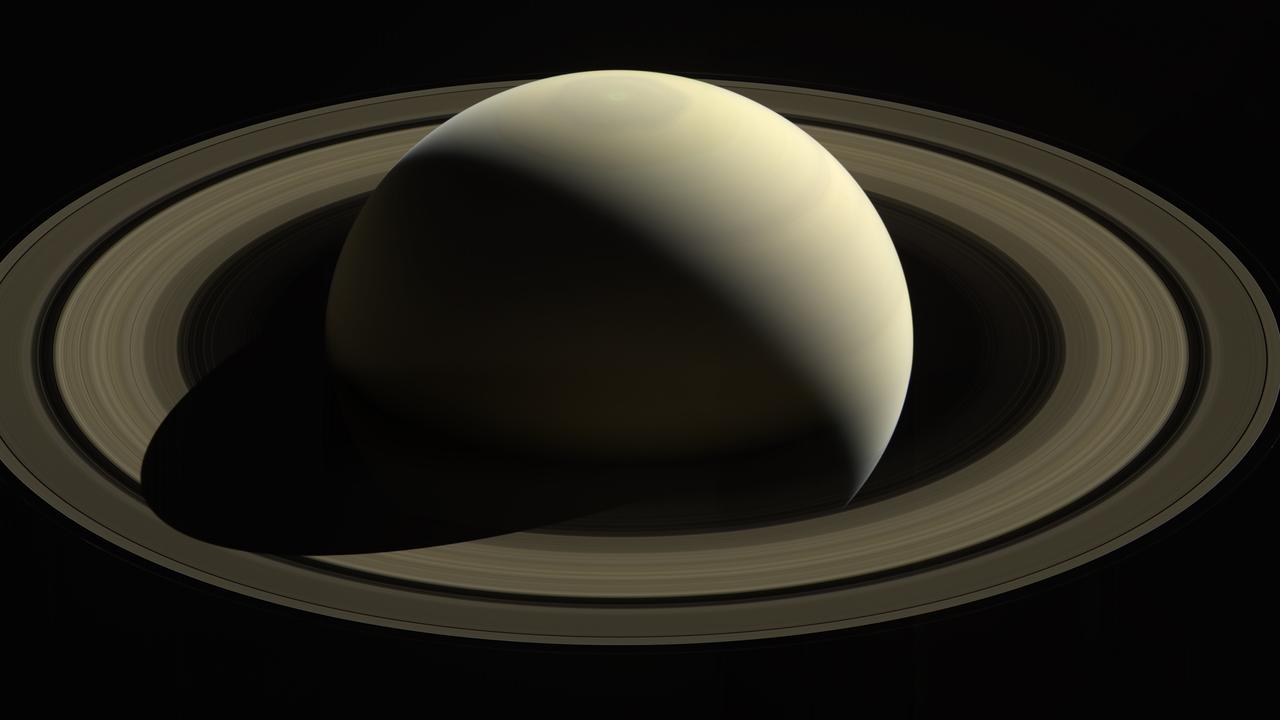 A picture of Saturn and its ring system, taken by Cassini in 2016. Picture: NASA/JPL-Caltech/Space Science Institute

Voyager 2, Australia is listening to you

CLASSROOM ACTIVITIES
1. Ingredients for Life
Work with a partner and create a ‘recipe’ of ingredients needed to sustain life on Saturn’s largest moon, Titan. Structure it like you would to read a cooking recipe and think about all the requirements it would take for humans to survive on a different moon.

Method: (how to create life on a moon)

HAVE YOUR SAY: If you were at the controls of a drone like Dragonfly, what would you look at in our solar system? Where would you land? What would you like to discover?
No one-word answers. Use full sentences to explain your thinking. No comments will be published until approved by editors.