An artist’s drawing of the neutron star as it is about to be swallowed by the black hole. Picture: Carl Knox, OzGrav-Swinburne University

Talk about a heavy snack. For the first time, astronomers have witnessed a black hole swallowing a neutron star, the most dense* object in the universe — all in a split-second gulp.

And Australian scientists have helped lead the discovery.

Although the cosmic crash occurred some 900 million light-years away, the evidence has only just reached Earth, picked up by the Laser Interferometer Gravitational-Wave Observatory in the US and the Virgo gravitational-wave observatory in Italy, and analysed by an international team including Australia’s Monash University and the ARC Centre of Excellence for Gravitational-Wave Discovery (OzGrav).

Astronomers witnessed the last 500 orbits before the neutron star was swallowed, a process that took far less than a minute and briefly generated as much energy as all the visible light in the observable* universe. 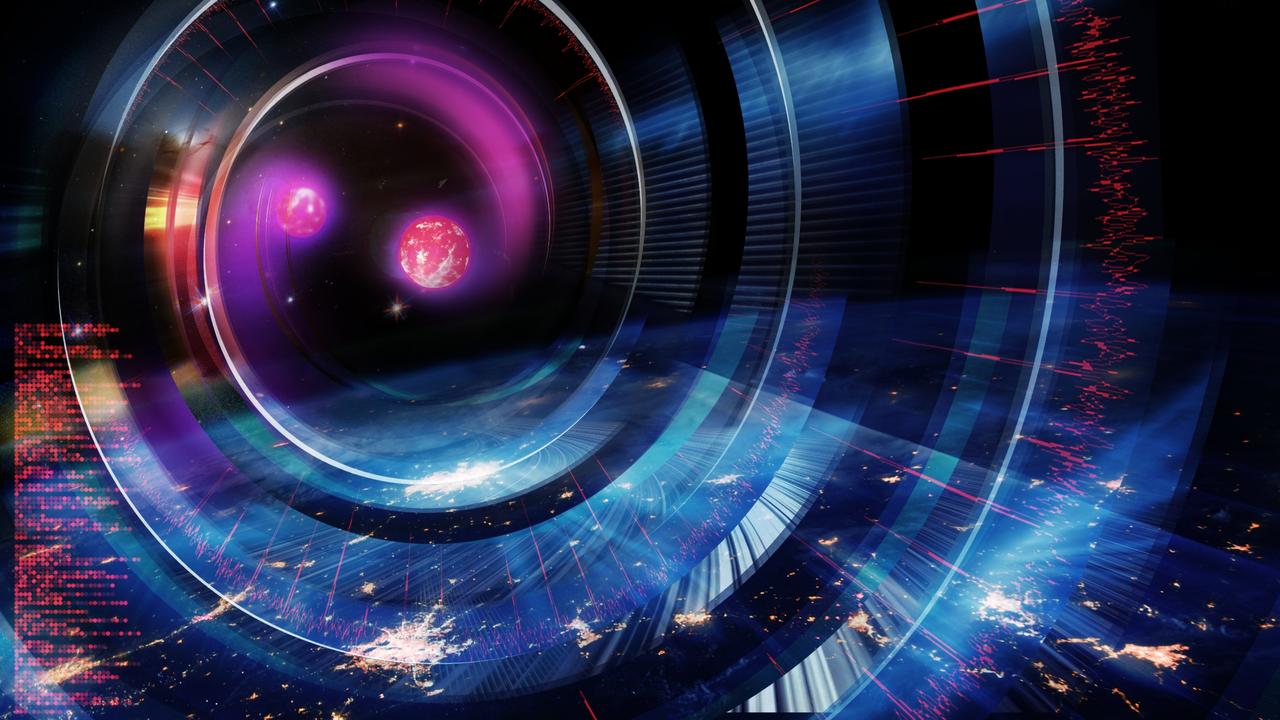 They saw the same thing 10 days later, on the other side of the universe. In both cases, a neutron star – a teaspoon of which would weigh a billion tons – orbited ever closer to the black hole, until they finally crashed together and the neutron star was gone in a gobble.

“It was just a big quick gulp, gone,” said study co-author Patrick Brady, an astrophysicist* at the University of Wisconsin-Milwaukee in the US.

Professor Brady said the black hole “gets a nice dinner of a neutron star and makes itself just a little bit more massive”.

The collision was discovered when gravitational waves, created by the massive objects in motion, were spotted by detectors on Earth. The gravitational waves are ripples of energy soaring through space and time, as first theorised* by Albert Einstein*.

The waves were detected in January 2020, but the study analysing the data by more than 100 scientists was published in Astrophysical Journal Letters on June 29, 2021. Australian and international scientists have for the first time witnessed the collision of a neutron star and a black hole.

Neutron stars are what’s leftover after a big star dies in a supernova* explosion.

Professor Brady said they were so dense that they had about 1.5 to two times the mass* of our sun, but were condensed* to about 10km wide.

Some black holes, known as stellar black holes, were created when an even bigger star collapsed into itself, creating something with such powerful gravity that not even light could escape.

Scientists think there should be many of these neutron star and black hole collisions, but they’ve yet to find one in our own galaxy.

“Mergers* of neutron stars with black holes dramatically warp* space-time – the fabric* of the Universe – outputting more power than all the stars in the observable Universe put together,” said OzGrav’s Dr Rory Smith.

“We will learn a great deal about the fundamental* nature of space-time and black holes, how matter behaves at the highest possible pressures and densities, how stars are born, live, and die, and how the Universe has evolved throughout cosmic time.”

CLASSROOM ACTIVITIES
1. Identifying Tier 3 vocabulary
There are lots of examples of “Tier 3” vocabulary in this news story. This means words that are content specific, that you generally wouldn’t use except for when communicating about a specific topic – in this case, space. Work with a classmate to read through the article and highlight all of the Tier 3 vocabulary you can find.

2. Extension
With your partner, choose five of the Tier 3 words that you highlighted. Then, separately write your own definitions for each of the five words. When you have both completed this, compare and discuss your definitions, creating a final definition that you both agree on and believe most clearly defines the word.

VCOP ACTIVITY
The A-Z of Space
There are so many discoveries constantly happening in relation to space, in fact you will often hear scientists or researchers saying ‘what do we really know?’

Well, let’s check your space knowledge. See if you can create an A-Z list about Space.

You can be creative as you like, and you might even need to use your imagination a little bit, but see how many words or phrases you can come up with starting with A, B, C D … all the way through to Z.

Compare your list with a partner and see if you can fill in any blanks between you.

Pick your favourite and draw a picture to help illustrate your word or phrase.