Billionaire Jeff Bezos’ next phase could be a futuristic space station This artist's illustration shows the core module of the planned Orbital Reef space station. Jeff Bezos' Blue Origin announced on October 25 that it wants to launch a new space station that will house up to 10 people in the second half of the decade, as the race to commercialise space heats up. Picture: Blue Origin/AFP

Jeff Bezos’ Blue Origin wants to launch a new space station that will house up to 10 people in the second half of the decade, as the race to commercialise* space heats up.

The private outpost is one of several planned in the coming years as NASA considers the future of the International Space Station (ISS) after the 2020s.

The space agency holds a contract with a company called Axiom to develop a space station that will initially dock with the ISS and later become freeflying.

Named “Orbital Reef”, the station will fly at an altitude* of 500km, slightly above the ISS, with inhabitants* experiencing 32 sunrises and sunsets a day, according to a fact sheet released by Blue Origin.

It will support 10 people in a volume of 830 sqm, which is slightly smaller than the ISS, in futuristic modules with huge windows. 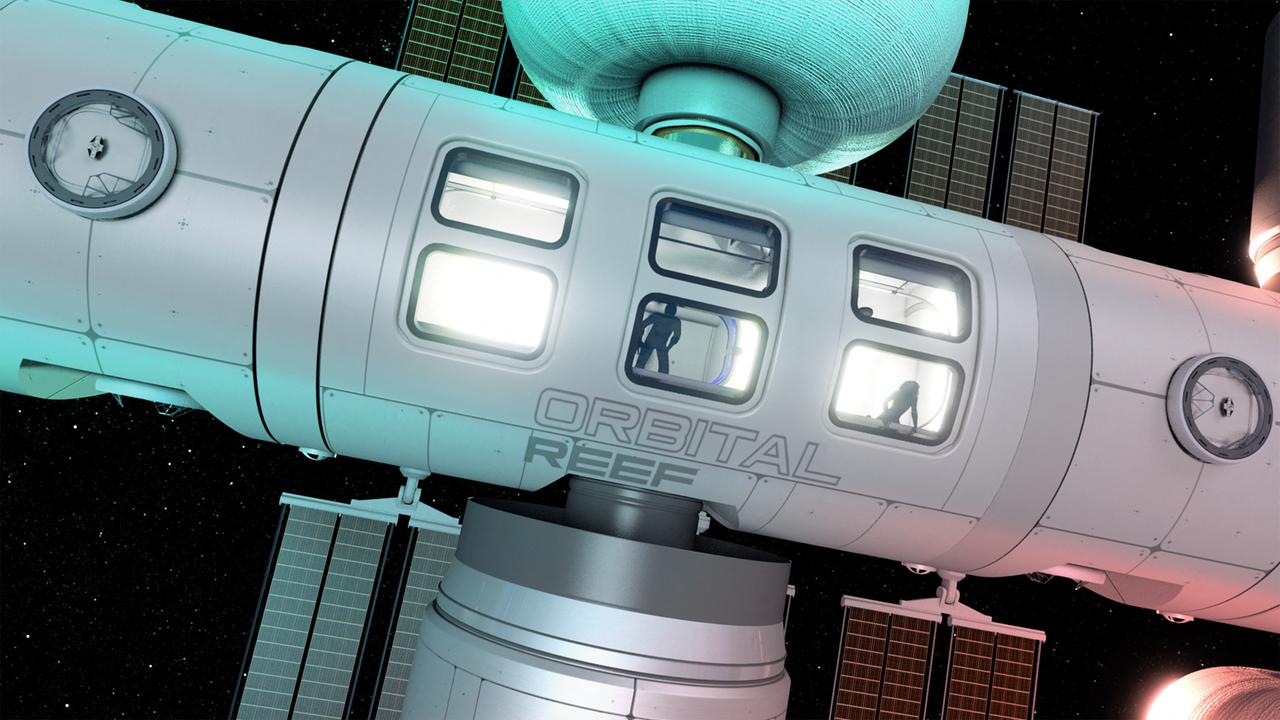 Room with a view: Blue Origin’s planned space station Orbital Reef will house up to 10 people and will have large windows for ample space gazing, as seen in this artist’s illustration. Orbital Reef is a joint venture between Blue Origin and Sierra Space and has the support of Boeing and Arizona State University. Picture: AFP

Completed in 2011, the ISS has long been a symbol of US-Russia space co-operation, but Moscow has recently cast doubt on the future of the partnership.

It is currently rated as safe until 2028 and new administrator Bill Nelson has said he hopes it will last until 2030, by which time NASA wants the commercial sector to step up and replace it.

Orbital Reef is described as “a mixed-use business park in space” that will support microgravity* research and manufacturing. It is a joint venture between Blue Origin, commercial space company Sierra Space and has the support of Boeing and Arizona State University.

“For over 60 years, NASA and other space agencies have developed orbital space flight and space habitation, setting us up for commercial business to take off in this decade,” said Blue Origin executive Brent Sherwood.

“We will expand access, lower the cost, and provide all the services and amenities* needed to normalise space flight.” This artist’s illustration shows the interior of Blue Origin’s planned space station Orbital Reef, which is described in a press statement as a mixed use business park in space. Picture: Blue Origin/AFP

Blue Origin is currently only able to fly to suborbital* space with its New Shepard rocket, which blasted Star Trek actor William Shatner beyond the atmosphere earlier this month.

Its other planned projects include New Glenn, a rocket that can fly cargo and people into orbit, and a lunar lander – though it lost the moon contract to rival SpaceX, and is suing NASA to try to reverse that decision.

Bezos, the second richest man in the world thanks to e-commerce giant Amazon, founded Blue Origin in 2000, with the goal of one day building floating space colonies with artificial gravity where millions of people will work and live, freeing Earth from pollution.

These colonies would be based on a design by Gerard O’Neill, Bezos’ physics professor at Princeton, and would consist of counter-rotating cylinders providing artificial gravity.

Do you think this is magical, or more of a weird concept for your body and mind to take in?

2. Extension
What do you think of Jeff Bezos’s goal of having millions of people living in space colonies to ease the environmental pressures that Earth is facing?

Is this something you and your family would like to experience?

How do you imagine it? Sketch some ideas or chat with a partner.