Astronaut Buzz Aldrin with the US flag on the Moon's Sea of Tranquillity on July 20, 1969. Picture: AFP/NASA/Neil Armstrong

Australia is one of eight countries to sign up to a new set of international Moon rules, which include no fighting and no littering.

NASA released the guidelines this week for its Artemis Moon-landing program, based on the 1967 Outer Space Treaty (in which the Moon and other celestial* bodies are exempt* from national claims of ownership) and other agreements.

NASA also included a no-trespass rule for the historic lunar landmarks such as Apollo 11’s Tranquillity Base, the site where Neil Armstrong and Buzz Aldrin landed Eagle on July 20, 1969. 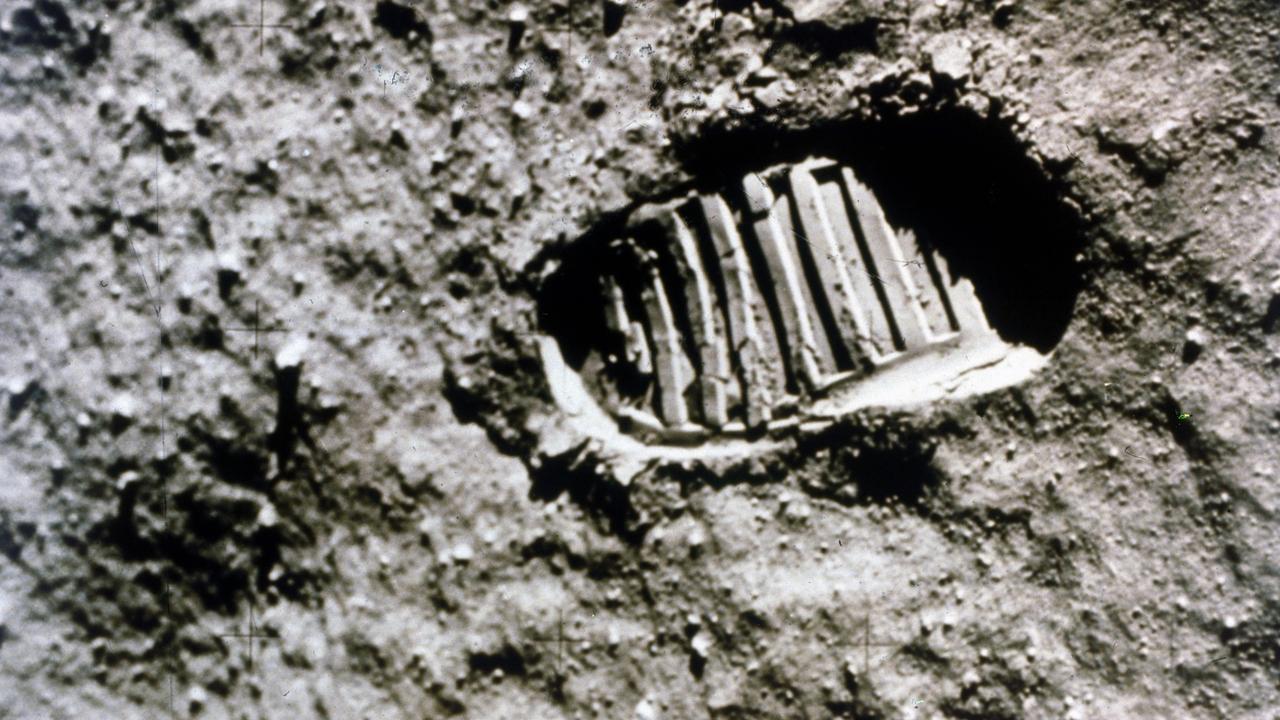 The first footprint on the Moon, from Apollo 11 mission, July 1969. The new accord requires signatories to keep away from historic landmarks such as this site. Picture: Heritage Space/Heritage Images/Getty Images

In addition to Australia, the other countries to so far sign the so-called Artemis Accords are the US, Canada, Italy, Japan, Luxembourg, United Arab Emirates and the UK.

NASA Administrator Jim Bridenstine said he expects more countries to join the effort to put astronauts back on the moon by 2024.

It promises to be the largest coalition* for a human spaceflight program in history, according to Mr Bridenstine, and is expected to pave the way for eventual Mars expeditions.

It’s important not only to travel to the Moon “with our astronauts, but that we bring with us our values,” noted NASA’s acting chief for international and interagency* relations, Mike Gold.

MOON RULES
Rule No. 1: Everyone must come in peace. Clone troopers fight against an army of battle droids in a scene from the movie Star Wars: The Clone Wars (2008). The rules state that countries must come to the Moon in peace. Picture: AP/Lucasfilm Ltd.

Violators* could be asked to leave, according to Mr Bridenstine.

The coalition can say, “Look, you’re in this program with the rest of us, but you’re not playing by the same rules,” he said.

Russia hasn’t yet signed the Artemis Accord. The country’s space agency chief, Dmitry Rogozin, said at an International Astronautical Congress virtual meeting this week that the Artemis program is US-centric* and he would prefer a model of co-operation similar to the International Space Station.

China, however, is out of the Accord altogether. NASA is prohibited under US law from signing any bilateral* agreements with China. NASA in mission to strike gold in space by 2022

First ever global rule book for the internet

CLASSROOM ACTIVITIES
1. Earth Rules
The rules for landing on the Moon were explained in this Kids News article. Now work with a partner and write a list of a maximum of 5 rules for people living on Earth to abide by. They can’t be too specific, but need to be very broad and general about how us humans can live more harmoniously together on this planet and look after each other, animals, and the environment.

Read your rules to the class to compare to other groups.

2. Extension
If China can’t sign the Artemis Accord and Russia hasn’t yet committed, how will this affect possible Moon landings by these countries? What happens if they break the rules other countries are abiding by?

VCOP ACTIVITY
Moon School Rules
Read the Moon Rules outlined in the article and reword them to create a set of new school rules for the outer galactic school to be built on the Moon. Is there any other rule you should add? Do different rules apply to adults than the do to children, or just different language?

Make sure your rules are clear and specific for everyone, but the shorter the better. We want to ensure everyone can understand them and follow them easily.

When you have finished, read them to a classmate to discuss if they make sense and are appropriate.

HAVE YOUR SAY: What Moon rule would you add to this list?
No one-word answers. Use full sentences to explain your thinking. No comments will be published until approved by editors.