Professor Volker Hessel (reflected in a space helmet) with a fresh and a freeze-dried strawberry. Picture: Matt Loxton

Australian scientists are cooking up astronaut food to send to space for a year before testing how tasty it is using an electronic nose and tongue.

The goal is to find a better way to prepare, store and serve meals for long space missions to the Moon and Mars.

The food will stay a year on board before returning to Earth, where scientists will assess its long-term stability* and whether it’s still satisfying to eat using a hi-tech version of human taste and smell sensors.

“Food is crucial* for space exploration and human colonisation* of space,” Prof Hessel said. “It has to do with nutrition content, so you get what you need, but also has to do with the flavour, which has a big impact on morale* and behaviour. Finding out whether food remains stable on long missions and how exposure to the environment on board spacecraft might affect food flavours is vitally* important.” 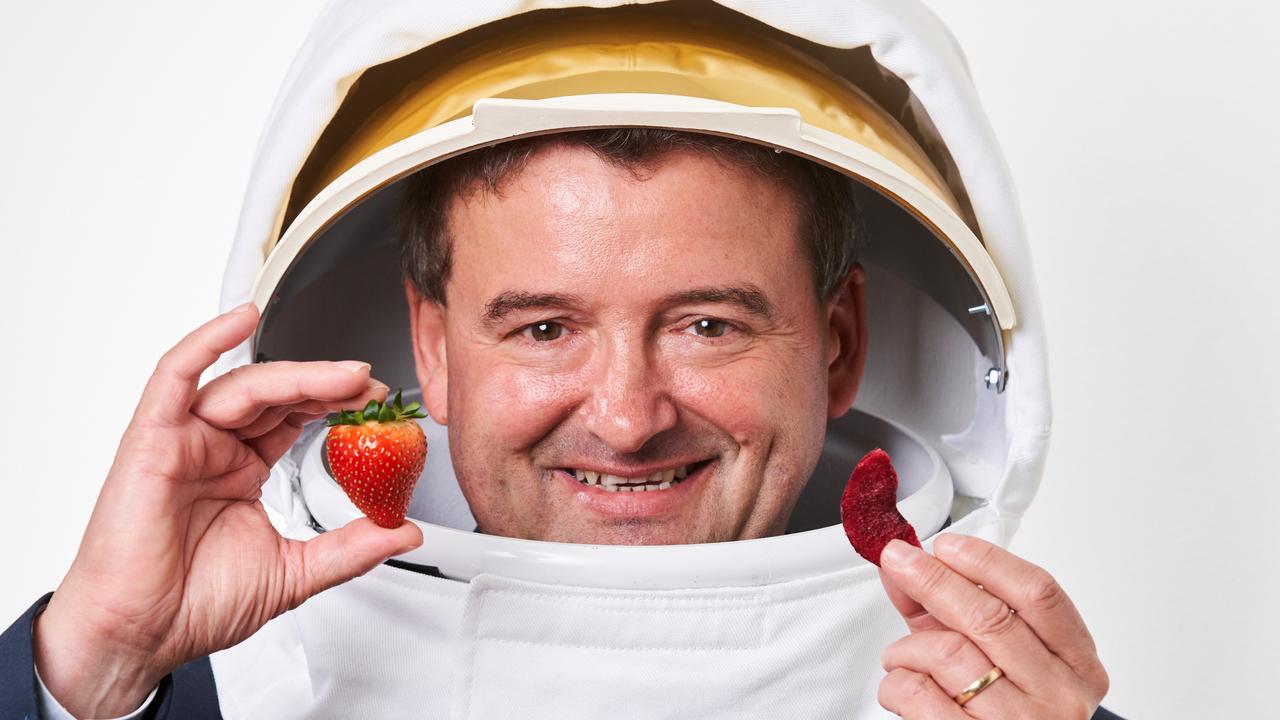 Professor Volker Hessel with two strawberries, one freeze dried, at the University of Adelaide, where a team is working to improve the taste of astronaut food. Picture: Matt Loxton

His team is experimenting with a new method for disinfecting* food, which can also be used to change food flavour, feel and smell.

The research is being conducted with the universities of Warwick and Nottingham in the UK, where flavour chemist Professor Ian Fisk is exploring food preferences and processing.

“Astronauts on missions in Earth’s orbit mainly live off thermo-stabilised* or dried meals that they can then rehydrate* with water before eating, so naturally they look forward to fresh food that is delivered when they are resupplied from home,” Prof Fisk said.

“The challenge is to improve the variety and quality of food so that astronauts have greater choice during long voyages, rather than being faced with monotonous* rotations of similar meals.” 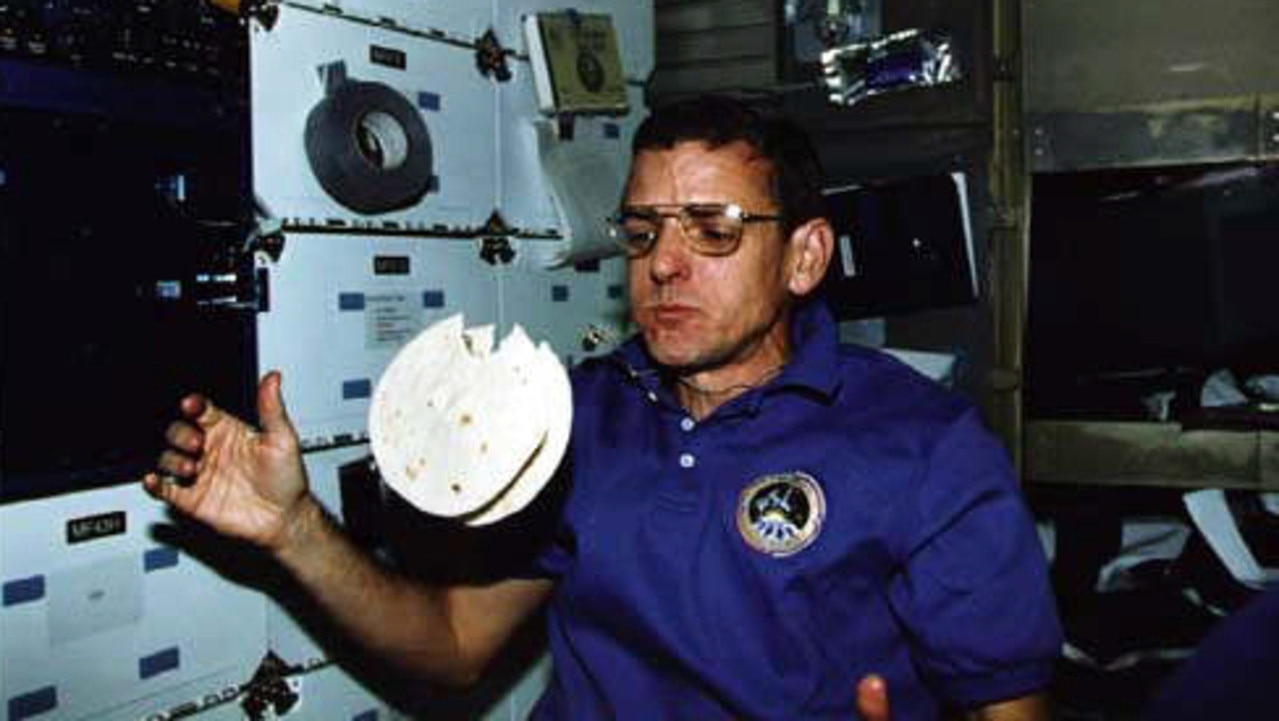 The research team receives support from the food industry and hope to one day commercialise* their work.

The current record for the single longest space mission of 438 consecutive days is likely to be broken with NASA’s 2024 mission to the Moon.

A Moon base would then be used as a launch point for the three-year journey to Mars. 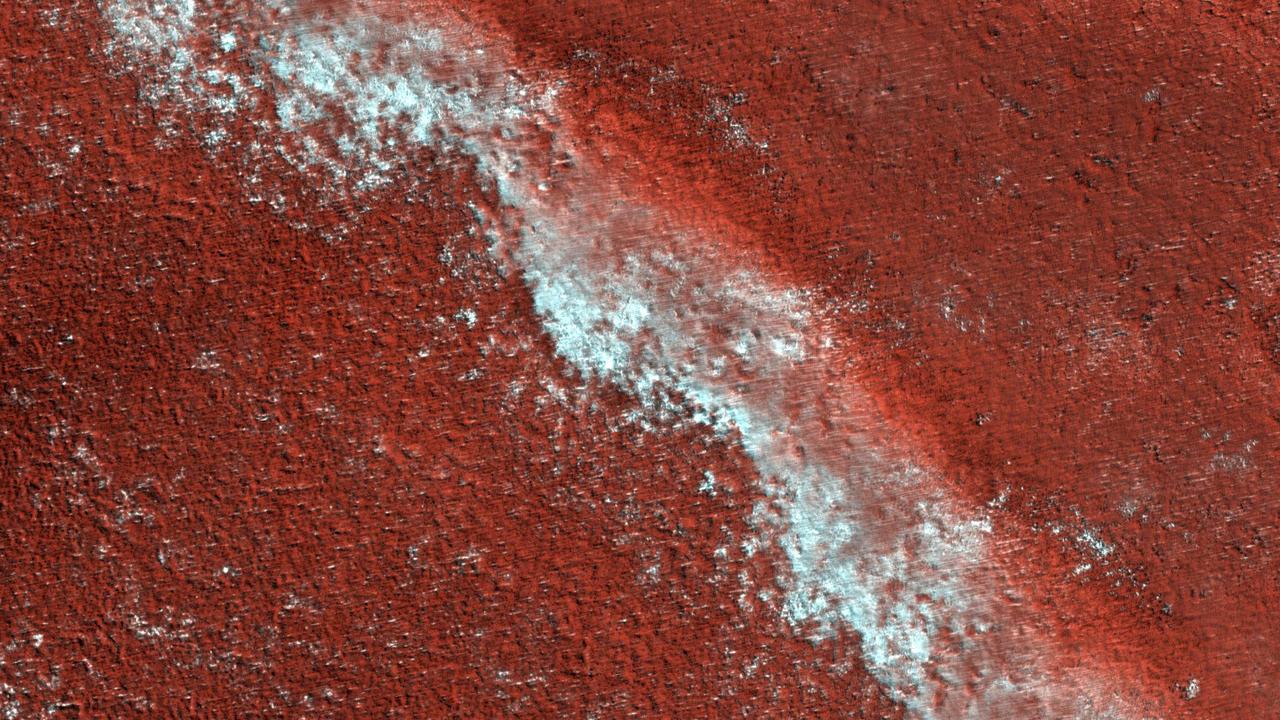 This NASA image released March 12, 2020 shows a section of the north polar layered deposits (NPLD) of Mars, made of water-ice and dust particles stacked one on top of the other. Layers are topped with seasonal carbon dioxide frost. Taken by Reconnaissance Orbiter’s HiRISE camera. Picture: AFP/NASA/JPL-Caltech/University of Arizona

LETTUCE IN SPACE
Astronauts on the International Space Station have grown and eaten a salad.

They ate the salad of red romaine leaves with an oil and vinegar dressing, describing them as “awesome”.

They also tested the nutritional value of the leaves and found them to be richer in minerals potassium, sodium, phosphorus, sulphur and zinc than lettuce grown on Earth.

The experiments were carried out on the ISS between 2014-16 and the results were published this month in the journal Frontiers in Plant Science.

The lettuce also had more antiviral and anti-cancer properties.

NASA will now try and grow peppers and tomatoes in the same conditions.

Dr Christina Khodadad, a microbiologist at Florida’s Kennedy Space Centre, said: “The ability to grow food in a sustainable system that is safe for consumption will become critical for longer missions.”

“Salad can be grown and consumed fresh with few resources.” CLASSROOM ACTIVITIES
1. Write a submission
Deciding which meals to cook and test for the astronauts would be a tricky task. There are so many options, with many people having different likes and dislikes. If you had a choice, what meals would you include in this project? Write a submission for your choice of three meals to be included in the testing. You need to convince the researchers that your suggestions meet the criteria of nutrition and flavour, and also would be appealing to the greatest number of astronauts.

Write your submission in the form of a letter, addressed to the relevant people involved in this research. Include reasons why you suggest these meals. Ensure you set out your letter in the correct format and use correct paragraphing and punctuation.

An example is: They do not have easy access to medical facilities.

HAVE YOUR SAY: What would you grow in space?
No one-word answers. Use full sentences to explain your thinking. No comments will be published until approved by editors.