The Australian Square Kilometre Array Pathfinder (ASKAP) has charted about three million galaxies in just 300 hours, producing a Google Maps-like atlas or map of space, where most of the millions of starlike points on the map are distant galaxies.

The CSIRO’s world-leading radio telescope has mapped a new atlas of the Universe in record speed and discovered a range of new galaxies.

The Australian Square Kilometre Array Pathfinder (ASKAP) has charted about three million galaxies in just 300 hours — equal to 12.5 days — producing a Google Maps-like atlas or map of space, where most of the millions of starlike points on the map are distant galaxies. It’s the first time about a million of the galaxies have been charted.

From outback Murchison in Western Australia, the ASKAP telescope takes highly detailed panoramic* pictures of the sky that are analysed by supercomputers, combining 903 images to form a map of 83 per cent of the Universe in weeks, rather than the tens of thousands of images needed for earlier surveys.

“ASKAP is applying the very latest in science and technology to age-old questions about the mysteries of the Universe and equipping astronomers around the world with new breakthroughs to solve their challenges,” CSIRO chief executive Dr Larry Marshall said.

The telescope receivers are capable of processing more raw* data — 13.5 exabytes* — at a faster rate than Australia’s entire internet traffic. One exabyte is one quintillion bytes. 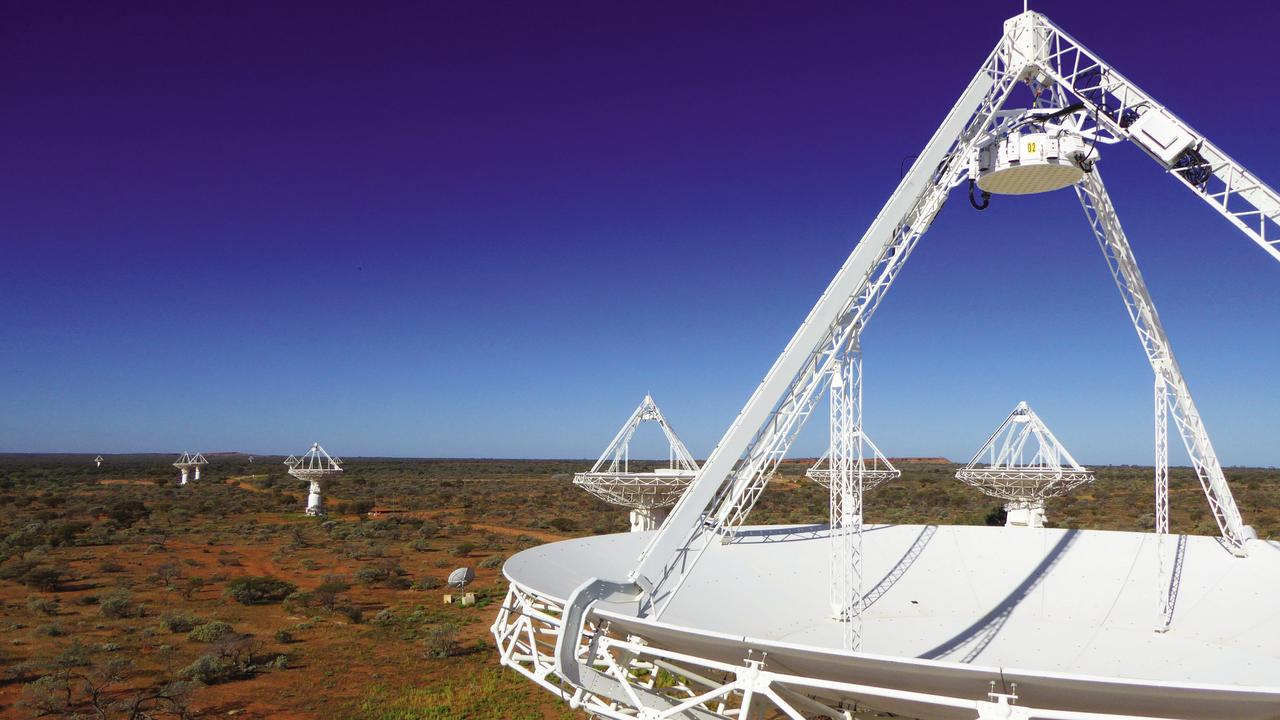 Some of the dishes that make up CSIRO’s Australian Square Kilometre Array Pathfinder (ASKAP) telescope at Murchison, WA. Picture: CSIRO

“ASKAP is a major technological development that puts our scientists, engineers and industry in the driver’s seat to lead deep space discovery for the next generation,” Minister Andrews said.

The research is published in Publications of the Astronomical Society of Australia.

A galaxy is a huge collection of gas, dust, and billions of stars and their solar systems.

A galaxy is held together by gravity.

Our galaxy, the Milky Way, also has a supermassive black hole in the middle.

The Universe contains billions of galaxies.

Sometimes the Universe is defined as everything.

Another idea about the definition of the Universe is that it is everything we can observe. This leads to the idea that our Universe — and all that’s contained within it — is one small part of a larger structure, referred to as the Multiverse.

exabytes: a unit of measuring information in multiples of bytes

pixels: tiny areas of colour or light on a computer screen that together make up an image

terabytes: a unit of measuring information in multiples of bytes

First-ever close-up of the Sun

Where is the telescope?

What did it do?

Name one thing that is different or new about the atlas.

What is the Milky Way?

What is meant by Multiverse?

CLASSROOM ACTIVITIES
1. Naming your own galaxy
If you were given one of the million new galaxies charted to keep as your own, give it a name that is meaningful to you along with a little blurb about what you named it after.

The name you create should be meaningful to you, your family or a special life event, similar to how people name stars in the sky.

Write the name of your galaxy in a bold, bright heading at the top of an A4 piece of cardboard, then write a paragraph below it explaining its name and meaning.

2. Extension
“ASKAP is a major technological development that puts our scientists, engineers and industry in the driver’s seat to lead deep space discovery for the next generation”

How do you think this new atlas of the Universe can help scientists, engineers and astronauts into the future?

What would you like to know more about in space?

HAVE YOUR SAY: What would you like to map?