For the first time, astronomers have watched what they believe was the birth of a new planet.

This new star is about 2.4 times the mass of the Sun and located in our Milky Way galaxy 520 light-years from Earth, researchers said on Wednesday. A light-year is the distance light travels in a year, 9.5 trillion km.

The scientists used the European Southern Observatory’s Very Large Telescope in Chile to spot a spiral* structure within the swirling disk around AB Aurigae generated* by the presence of a planet. They detected a “twist” pattern of gas and dust in the spiral structure marking where the exoplanet — the name for a planet outside our solar system — was forming. 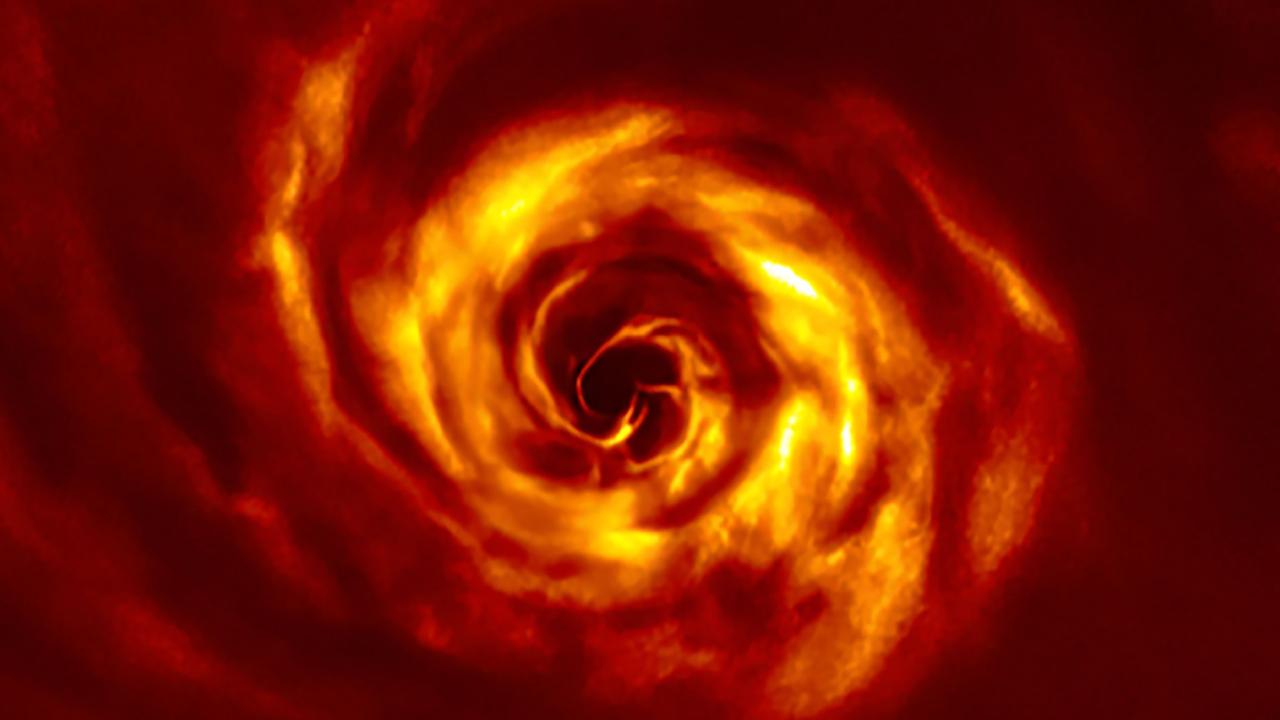 In the inner part of the shape is a twist in very bright yellow that scientists believe marks the spot where a planet is forming. This twist lies at about the same distance from the AB Aurigae star as Neptune from the Sun. Picture: AFP/ESO/Boccaletti et al

“It takes several million years for a planet to be in its final stage, so birth is not well defined in time. However, we can say that we were likely able to catch a planet in the process of formation,” said Observatoire de Paris astronomer Anthony Boccaletti, who led the research published in the journal* Astronomy & Astrophysics.

More than 4000 exoplanets have been discovered orbiting stars beyond our solar system. Scientists are eager to learn more about how they are born as cold gas and dust stick together in these disks surrounding new stars.

The planet is located about 30 times further from its star than Earth’s distance from the Sun — about the distance of the planet Neptune in our solar system, Boccaletti said. Artist’s illustration of our solar system, showing the relative distance of the planets from the Sun. The new planet is located about 30 times further from its star than Earth’s distance from the Sun. Picture: AP/ESA

It appears to be a large gas planet, not a rocky planet like Earth or Mars, and may be more massive than our solar system’s largest planet Jupiter, Boccaletti added. The Milky Way seen this week above the photographer’s home in Victoria. The new star and it’s forming planet is in our Milky Way galaxy 520 light-years from Earth. Picture: Jay Town

CLASSROOM ACTIVITIES
1. Name the planet
What do you think the new exoplanet should be called? Choose a name. Then, write paragraphs explaining where your name comes from and why it is an excellent choice for the new exoplanet. If you are stuck for ideas, find out how planets are usually named (hint: the planets in our solar system are named after Ancient Greek and Roman gods and goddesses).

2. Extension
Create an artwork or piece of creative writing inspired by the description of what the astronomers saw.

Your job is to look out for any lifeforms on the new gas planet.

Write a description from the time the team’s shuttle heads through the Milky Way to the point where the planet first appears in your shuttle window.

Remember we can’t see what you see, so you’ll have to be very clear on creating a picture with your words.

HAVE YOUR SAY: What in space would you like to see happen?
No one-word answers. Use full sentences to explain your thinking. No comments will be published until approved by editors.