Combined images of Saturn and some of its 82 known moons.

The solar system has a new winner in the most-moons category.

Scientists have found 20 new moons around Saturn, giving the ringed planet a total of 82. That beats Jupiter and its 79 moons.

“It was fun to find that Saturn is the true moon king,” said astronomer* Scott Sheppard of the Carnegie Institution for Science in Washington DC in the US.

Jupiter, however, keeps its crown as the planet in our solar system with the biggest moon. Jupiter’s Ganymede is almost half the size of Earth. Our Moon, orbiting Earth, has a diameter* of 3474.2km. By contrast, Saturn’s 20 new moons are tiny, each barely 5km in diameter. 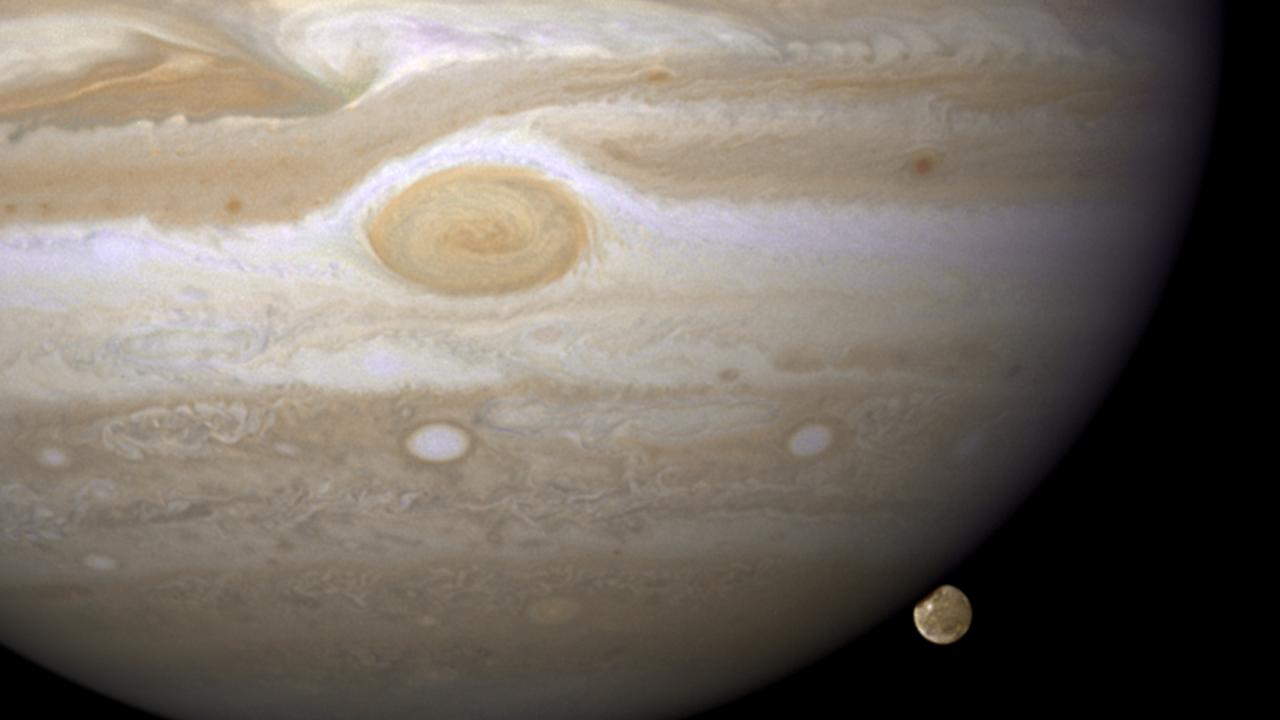 Jupiter’s moon Ganymede just visible behind Jupiter. Composed of rock and ice, Ganymede is the largest moon in our solar system and is even larger than the planet Mercury. This photo was taken by NASA’s Hubble Space Telescope.

Dr Sheppard and his team used a telescope in Hawaii to spot Saturn’s 20 new moons in the past couple of months. About 100 even tinier moons may be orbiting Saturn, still waiting to be found, he said.

Astronomers have pretty much completed the inventory* of moons as small as 5km around Saturn and 1.6km around Jupiter, according to Dr Sheppard. Future larger telescopes will be needed to see anything smaller.

It’s harder spotting mini moons around Saturn than Jupiter, Dr Sheppard said, given how much farther away from Earth Saturn is.

“So seeing that Saturn has more moons even though it is harder to find them, shows just how many moons Saturn has collected over time,” he wrote in an email. These baby moons may have come from larger parent moons that broke apart right after Saturn formed. Saturn’s moons Dione and Tethys passing each other, with the planet’s ring system just visible at the bottom. This photograph was taken by the Cassini spacecraft.

Seventeen of Saturn’s new moons orbit the planet in the opposite, or retrograde, direction. The other three circle in the same direction that Saturn rotates. They’re so far from Saturn that it takes two to three years to complete a single orbit.

“These moons are the remnants* of the objects that helped form the planets, so by studying them, we are learning about what the planets formed from,” he wrote.

Just last year, Dr Sheppard found 12 new moons around Jupiter. The Carnegie Institution had a moon-naming contest for them; another is planned now for Saturn’s new moons. No one yet knows whether any planets beyond our solar system have even more moons than Saturn.

VIDEO: The work by the Cassini spacecraft showed us that two of Saturn’s moons have some features that could support life

Is there life on Saturn's moons?

At university, he first studied a type of science called physics.

He has discovered dozens of moons around Jupiter, Saturn, Uranus and Neptune.

He has also discovered comets, lots of dwarf planets, centaurs* and other celestial* bodies.

In 2018 he was the lead discoverer of the most distant object in our solar system, dwarf planet 2018 VG18, nicknamed Farout. 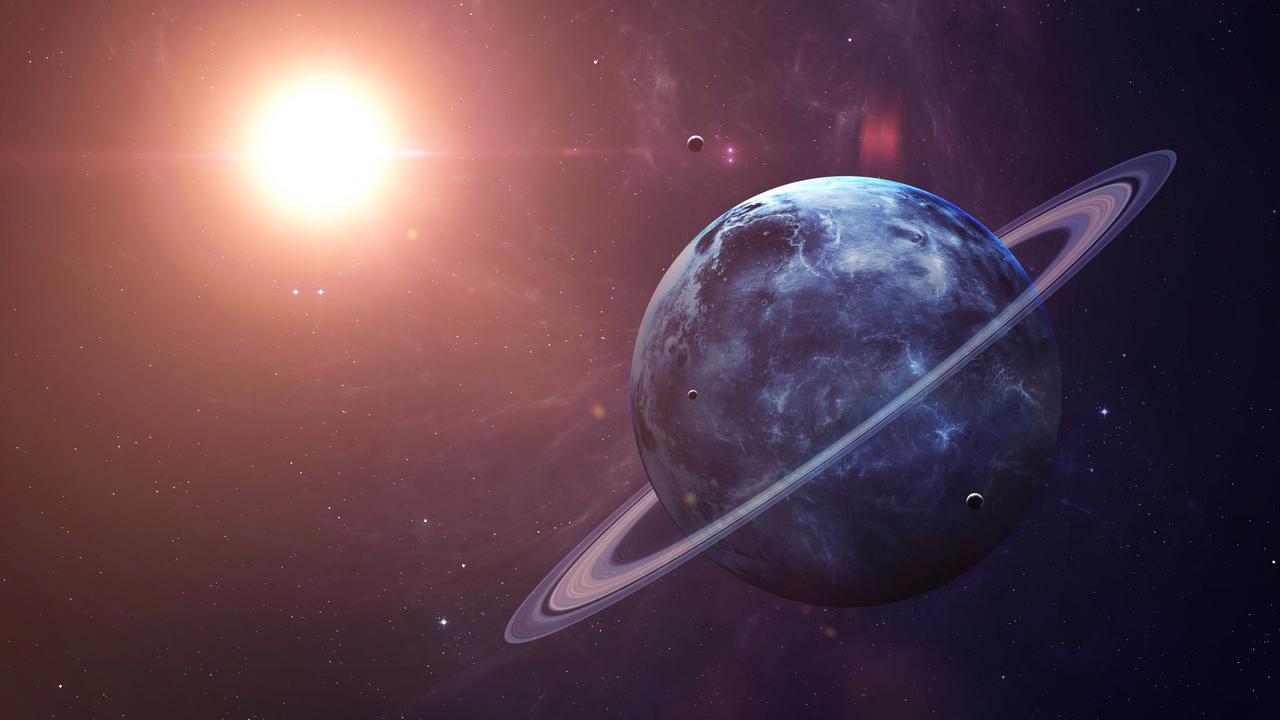 Uranus with some of its moons. Astronomer Scott Sheppard has discovered some of the moons around Uranus.

Jupiter, the brilliant jewel in our night sky

CLASSROOM ACTIVITIES
1. Name the moons
Imagine there is a competition to name five of the new moons discovered around Saturn. For each name, write an explanation of the name and why it should be chosen as the winner.

Design and create a poster that will help younger kids understand the most important and interesting things about Scott Sheppard’s discoveries.

OR design and create a poster that will help younger kids understand the most important and interesting things about Saturn and its moons.

If possible, you may like to do some more research on Dr Sheppard or Saturn to help complete your poster.

VCOP ACTIVITY
Moon for sale
Guess what? You just bought a moon. Pack your bags and get ready for takeoff. You only have a few days to get organised.

Use the suitcase template to pack 10 items you could not live without.

What do you take and why? 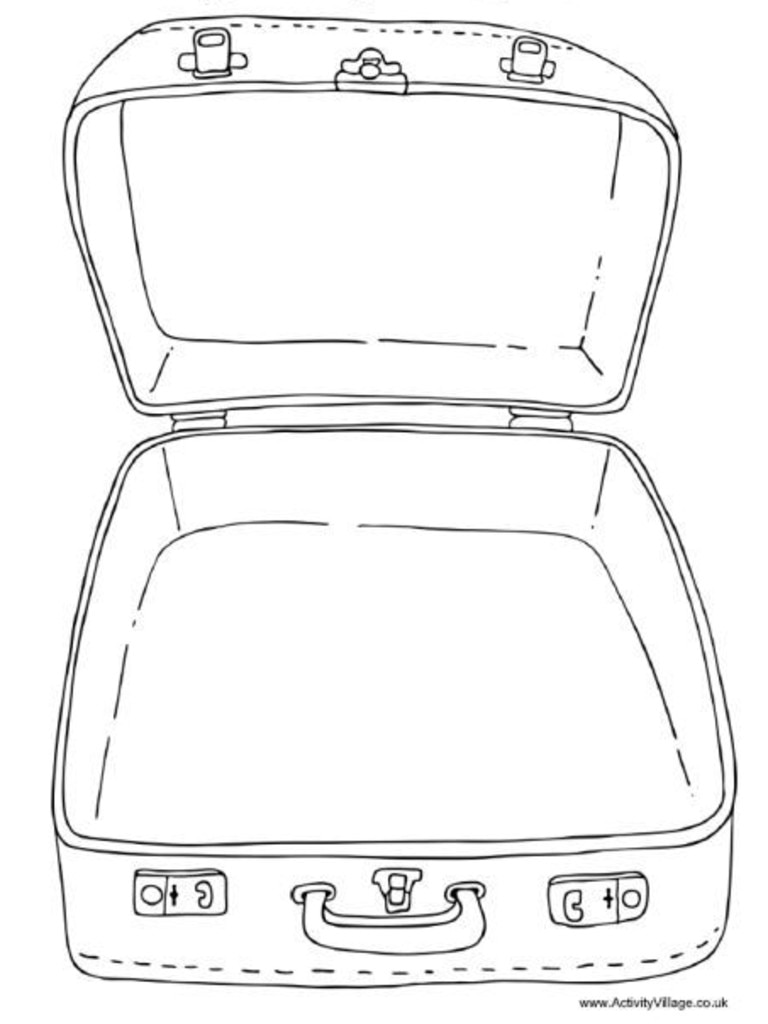 Use this suitcase template or draw your own on a blank page to help you pack your bags to your new moon!

HAVE YOUR SAY: If you discovered a new moon of Saturn’s, what would you call it and why?
No one-word answers. Use full sentences to explain your thinking. No comments will be published until approved by editors.