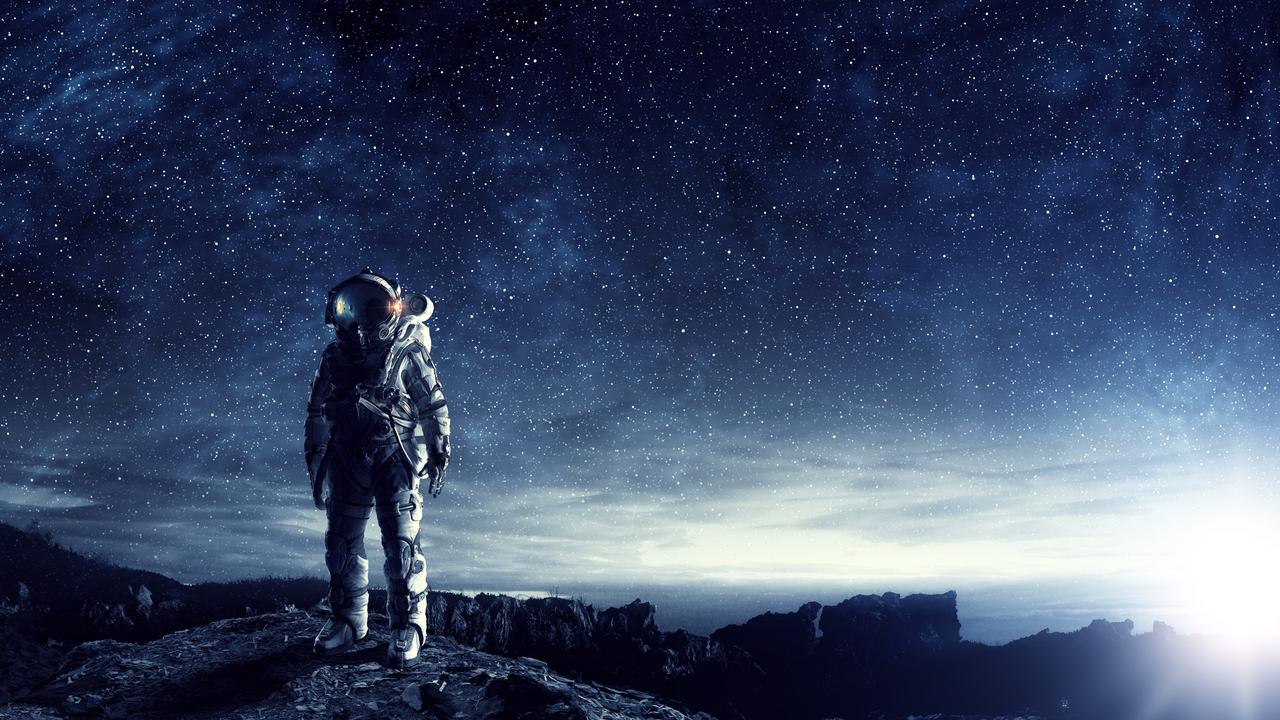 The observation that astronauts’ blood sometimes clots and flows in reverse will need to be better understood before we head off on long space trips in the future.

The observations could have serious implications* for plans to send astronauts to Mars and to allow tourism in space.

An unnamed astronaut on the International Space Station was carrying out an ultrasound on their body – guided by experts on the ground. An ultrasound is a scan to study inside the body.

Similar tests before the astronaut went to space came back normal.

But the scan taken in space revealed a clot* of blood, shocking NASA doctors.

“We were not expecting this. This has never been reported before,” said NASA scientist Karina Marshall-Goebel, speaking to The Atlantic.

The astronaut didn’t have any clot-related symptoms, but was given blood-thinning medication for the rest of their time in orbit to prevent more clots forming. This clotting and reverse flow was declared a new risk for humans in spaceflight, which will have to be better understood and planned for before astronauts can spend months or years in space, or before regular people can go to space for holidays or to live and spend extended periods in reduced gravity.

NASA researchers observed the jugular veins of 11 astronauts on the ISS using ultrasounds.

And in five of those 11 astronauts, blood flow in the jugular vein had stalled*.

“Sometimes it was sloshing back and forth a bit, but there was no net-forward movement,” Ms Marshall-Goebel explained.

The jugular vein is one of the most important parts of the body.

It runs between the heart and the head, draining deoxygenated* blood from the brain.

This “draining” process is essential to reduce pressure in the brain. 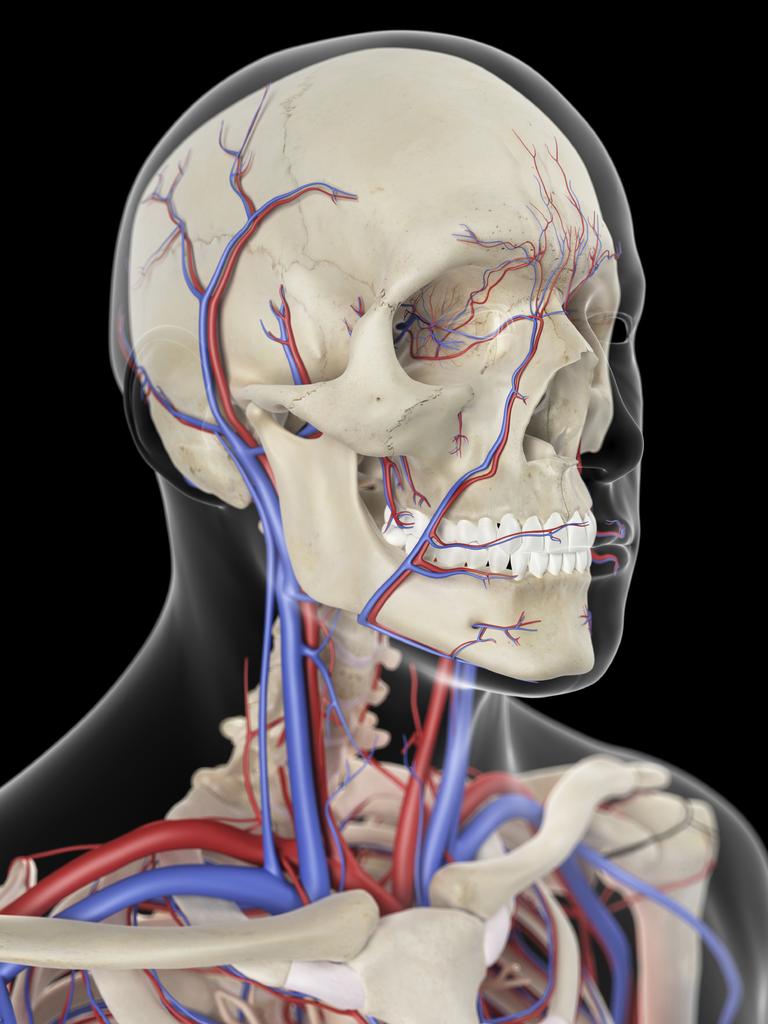 The jugular vein runs down the neck to carry deoxygenated blood from the brain back to the heart. Picture: iStock/Getty Images

Stalled blood flow in veins is really rare, and is typically only seen in legs – often after long plane flights.

Blood that doesn’t move normally through the body is a major concern because it can lead to clotting, which can cause more serious problems like damage to the lungs.

The blood in the jugular vein also began moving in the opposite direction (from the heart towards the head) for two astronauts.

NASA scientists described this as “extremely abnormal”, and said that the blood may have switched directions due to a blockage.

A similar phenomenon* has been observed on Earth for patients with tumours* that force blood to find a different route to the heart.

This strange condition vanished when the astronauts returned to Earth.

“I think it was probably scary for everybody.

“But I think the fact that we found this now is really, really good news, because if you know this is a risk factor of spaceflight, it’s something that you can monitor* and prevent,” said Ms Marshall-Goebel. 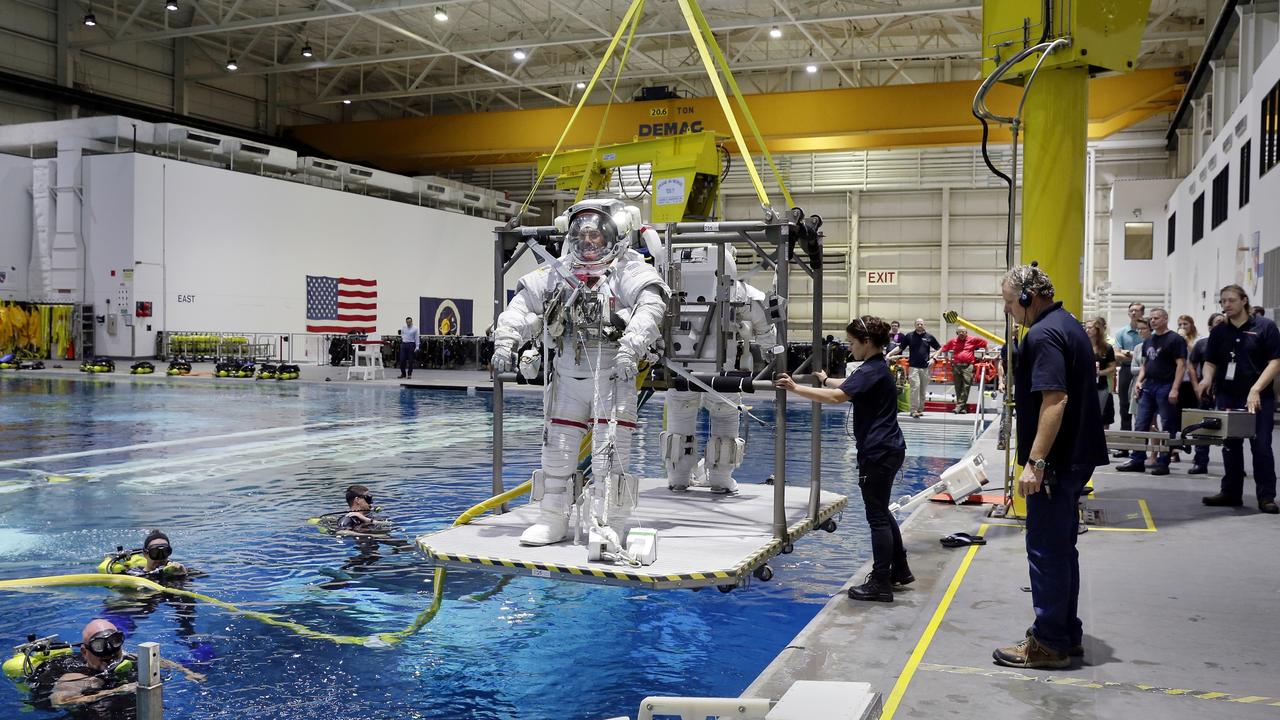 Astronauts Kjell Lindgren and Eric Boe about to train underwater on July 3, 2019 in preparation for their work on the ISS without gravity. Picture: Michael Wyke

As part of the same research, astronauts on the space station placed their legs in a special chamber with lower air pressure to suck more blood into their lower legs as would happen in Earth’s gravity. The chamber improved blood flow to the legs in 10 of 17 tests but worsened it in two. Record-breaking Russian cosmonaut Valery Polyakov (then 52), is greeted at Star City, the cosmonaut training centre near Moscow, Russia, after spending 439 consecutive days in space in 1994-1995.

THE LONG TRIP TO MARS
The finding that space travel can do weird things to humans’ blood and the way it flows around the body will have to be planned for as we look to space tourism and long-distance space travel in the future.

US President Donald Trump has ordered NASA to get humans to Mars by 2033.

Spacecraft that have already been to Mars without astronauts have taken 128-333 days, which would be a very long time for a human to be in a cramped spacecraft.

Russian cosmonaut Valery Polyakov holds the record for the longest continuous trip into space, with nearly 438 consecutive* days in orbit aboard the Mir space station, from January 1994 to March 1995. He trained very hard before the trip to be as fit and strong as possible and wore a pressure suit while in space to force blood into his legs. CLASSROOM ACTIVITIES
1. Create a space first aid kit
If you were an astronaut on the ISS, what would you pack in a first aid kit? Think about the health issues in today’s story, then think about other effects that space travel and living on the space station could have on your health. Also think about what types of accidents you could have in zero gravity. What would you pack to help you when things go wrong? List all of the items you would pack and, for each item, write a sentence explaining why you would pack this and what might happen to make you need it.

2. Extension
After reading the story, do you think that it is safe to start space tourism? Write arguments for and against people going on space holidays.

HAVE YOUR SAY: Does this make you more or less keen to go to space? Would you go if you could?
No one-word answers. Use full sentences to explain your thinking. No comments will be published until approved by editors.