The re-entry capsule, carrying samples collected from a distant asteroid, after being dropped off by Japanese space probe Hayabusa-2, following its landing in South Australia. Picture: AFP/JAXA

A capsule containing a sample of an asteroid that could help unlock some of the mysteries about life on Earth has landed “perfectly” in the South Australian outback.

The capsule touched down in Woomera, South Australia, early on Sunday morning, after travelling more than 5.25 billion kilometres.

At 4.31am AEDT, the Japanese Aerospace Exploration Agency confirmed all “operations related to the re-entry of the capsule have ended”.

“The operation was perfect,” the agency wrote on Twitter.

“We will now move into scientific observation operations, and observe the Earth and moon with scientific instruments.” 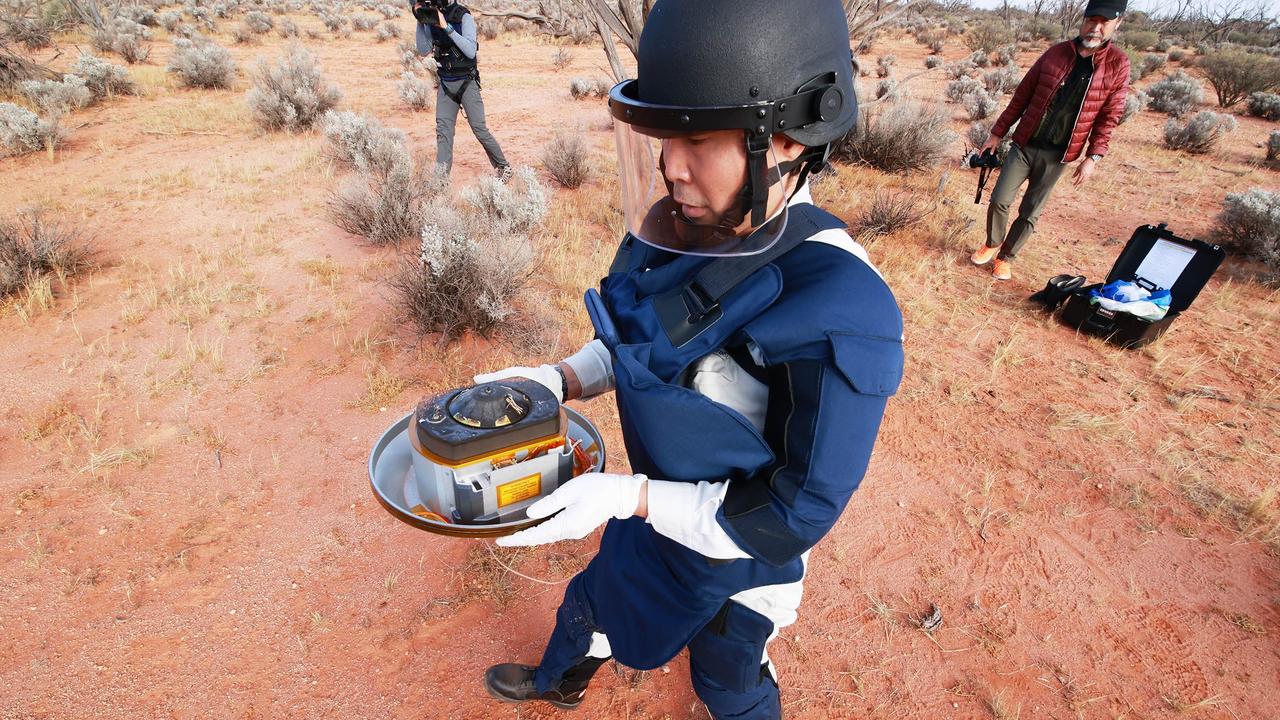 It is the first ever sub-surface asteroid sample to return to Earth and could help scientists understand how life formed here.

The capsule became a fireball as it entered the Earth’s atmosphere, making for impressive photos. A long exposure shows the light trail of a re-entry capsule, carrying samples collected from a distant asteroid after being released by Japanese space probe Hayabusa-2, entering the Earth’s atmosphere as seen from Coober Pedy in South Australia early on December 6, 2020. (Photo by Morgan Sette / AFP)

Before its arrival, the capsule was travelling at a maximum speed of 11.7km/s.

A helicopter flew the capsule from the landing site to a Japan Aerospace Exploration Agency (JAXA) research facility in Australia.

The capsule may also contain some gas, which will be extracted in Australia, JAXA president Hiroshi Yamakawa said. Members from Japan Aerospace Exploration Agency (JAXA) remove a sample from the returned capsule from the Search and Rescue Helicopter during the Hayabusa2 mission at the Woomera Test Range.

The return of the capsule was celebrated in Japan.

Spectators gathered at a theatre near the Japanese capital of Tokyo to view the return clapped and waved banners, with one woman in tears. They wore masks and kept a distance from each other as precautions against the coronavirus.

After Hayabusa2 dropped off the capsule, it changed course and headed back into space. The path of the Hayabusa2 spacecraft on its way past Earth to drop off the sample. Picture: JAXA/Deutsches Zentrum für Luft- und Raumfahrt

Australian Minister for Industry, Science and Technology, Karen Andrews, said the mission was a very important scientific and technical feat*.

“This landing will enable scientists to gain insights into the origin and evolution of the solar system, including organic* matter and water, which could hint at how our oceans came to be,” she said.

“It also reinforces Australia’s place as a trusted partner in space, as we look to triple the size of the local sector and create 20,000 new jobs by 2030.”

Deputy head of the Australian Space Agency, Anthony Murfett, said the Hayabusa2 return was a historic milestone* for the global space, science and research community.

“Successfully realising* the sample return under pandemic restrictions will not only be important for space science and universal discovery, but also for Australia and Japan’s cooperative relationship which spans over many decades,” he said.

“Working on a mission with JAXA is central to one of the ASA’s key roles – to open doors internationally and work with international counterparts* on space activities.” A toy koala in a space outfit is displayed with Australian and Japanese flags at a media conference in Woomera, South Australia on December 6, 2020, after samples collected from a distant asteroid arrived on Earth after being dropped off by Japanese space probe Hayabusa-2. Picture: AFP

NASA on mission to strike gold in space by 2022

CLASSROOM ACTIVITIES
1. Write a Haiku
Given that Hayabusa2 is a Japanese spacecraft, use a Haiku (a Japanese form of poetry) to explain the capsule’s re-entry on Sunday morning.

This form of poetry will not give you much room to elaborate on any details so you will need to work out the most important aspects of the story to fit into your poem.

An example of a first line could be …

Give your Haiku a title.

2. Extension
How far? How fast?

The Japanese Hayabusa2 spacecraft and the capsule have travelled some extraordinarily long distances and at some super-fast speeds.

Read through the article and note down how fast the capsule has travelled.

If you could travel at the same speed as the capsule you would be able to go the whole way around Earth (Earth’s circumference is 40,075km) in under one hour.

Would you like to be able to travel this fast? What would be the ADVANTAGES and DISADVANTAGES of travelling this fast. List at least 3 of each.

Write a short paragraph explaining why you would or wouldn’t like to be able to travel as fast as the capsule.