The world’s richest person has unveiled his plans to colonise* space.

The colonies would include huge, sustainable*, floating habitats* holding cities, farmland and even national parks.

They would be positioned close to Earth so that people can hop back and forth.

Amazon boss Jeff Bezos showed off the drawings for the permanent space settlements during a talk in Washington DC in the US and plans for his own space company, called Blue Origin, to lead the project.

He explained that each habitat would house “a million people or more each”.

Having this many humans “means we’d have thousands of Mozarts and a thousand Einsteins. This would be an incredible civilisation*,” he said.

Mr Bezos founded Blue Origin in 2000, in the beginning focusing on suborbital* flights that let tourists pay for short trips to the edge of space.

There are still flight tests to be done before these trips gets off the ground, but Mr Bezos has already set his sights on bigger things.

Just last week he unveiled a new lunar* lander that he hopes will take humans back to the moon in 2024.

And now, these floating space habitats. An outside view of one of the space bases, looking into a city below. Picture: Blue Origin

During his presentation, Mr Bezos said the habitats would create artificial gravity by constantly rotating — an idea first put forward by physicist* Gerard O’Neill, who Mr Bezos studied under during his time at Princeton University in the US. “These are very large structures, miles on end, and they hold a million people or more each,” Mr Bezos said.

“Some of them would be more recreational — they don’t all have to have the same gravity — they can have a recreational one that keeps it zero-g so you can go flying with your own wings.”

He added that they’ll have the “ideal climate” at all times, “like Maui* on its best day, all year long.” The habitats would be ideal environments with perfect weather. Picture: Blue Origin

The habitats are still a long way off, but Mr Bezos believes they’ll help humans escape Earth as resources on the planet dwindle*.

“This is going to take a long time, this is a big vision,” he said. Some of the space habitats would contain enormous national parks. Picture: Blue Origin

He showed off a life-size model of a robotic ship the size of a small house that he boldly claims will touch down on the moon within five years. 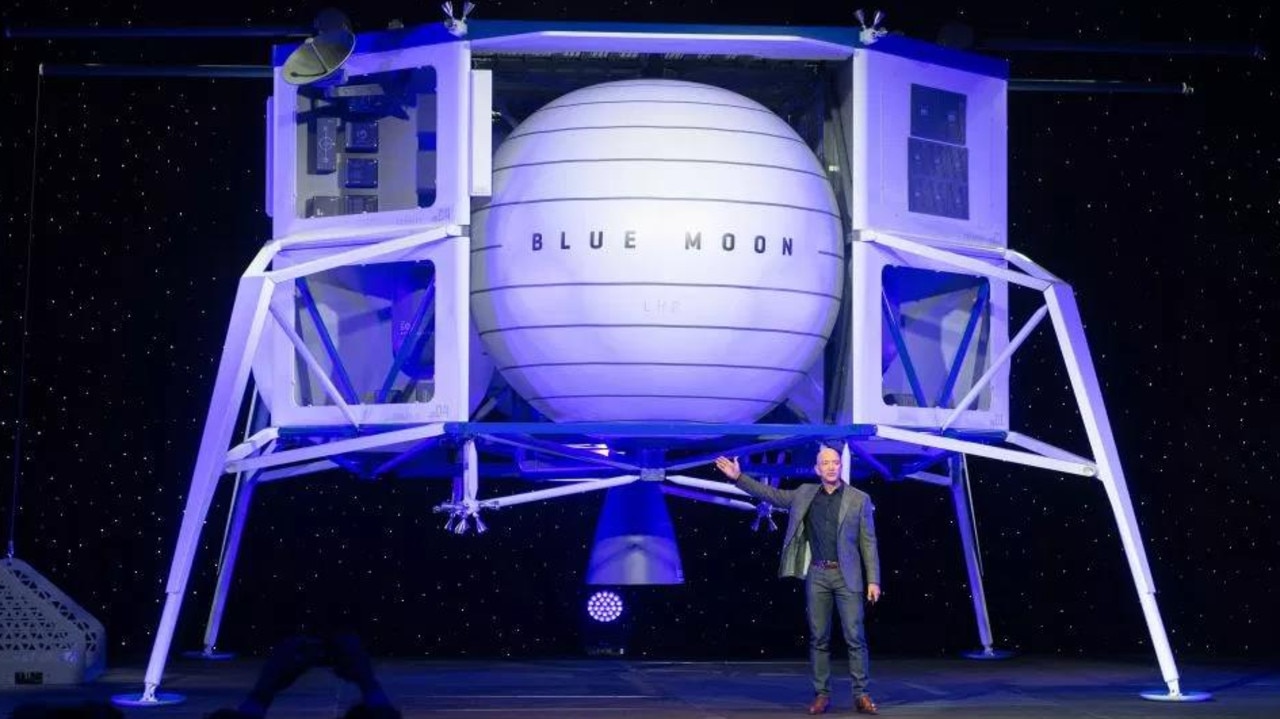 The company is aiming to bring people to the moon along the same time frame as NASA’s proposed 2024 mission.

Mr Bezos said: “It’s time to go back to the moon. This time to stay.”

He didn’t share details such as launch dates or who would travel on his rockets.

Blue Origin is in a space race with other private rocket firms SpaceX and Virgin Galactic.

This is an edited version of a story originally published in The Sun and is reproduced with permission.

Trump sending astronauts back to the moon

CLASSROOM ACTIVITIES
1. What would you do?
If you were the richest person in the world, what would your ‘big vision’ project be? Jeff Bezos wants to build space colonies. What would you do? Outline your plan and write an explanation of why this is so important. Create some designs for it or design an advertisement encouraging people to support your plan.

2. Extension
Jeff Bezos talks about the benefits of having a trillion humans in the solar system. What do you think some of the problems might be? List as many as you can. For each problem, write a possible solution.

HAVE YOUR SAY: Would you live in a space habitat?
No one-word answers. Use full sentences to explain your thinking. No comments will be published until approved by editors.