Scientists have viewed the deepest regions of the Great Barrier Reef Marine Park and found a rare scorpion fish, never before seen in Australian waters.

Scientists have made the first recorded observation in Australia of the extremely rare scorpion fish.

The colourful and well-camouflaged ambush* predator was photographed on an expedition in the Great Barrier Reef, Queensland.

The fish appears to walk along the sea floor using its pectoral fins, described as “an awkward, lumbering* gait*”.

Scientists say the fish has never been seen in Australia, the closest previous sighting being in Hawaii.

On the expedition to the deepest regions of the reef, scientists also discovered five undescribed species of black corals and sponges. The research was done aboard Schmidt Ocean Institute’s research vessel Falkor, on its fourth expedition of the year, as part of the Institute’s Australia campaign.

The team used a remotely operated underwater robot to view high-resolution video of the bottom of the ocean floor, about 1820m deep.

“This included the most comprehensive* midwater robotic dive survey series to ever have been conducted in the South Pacific,” Dr Brendan Brooke said, the expedition’s lead scientist from Geoscience Australia.

“Research vessel Falkor has integrated a range of technologies that have allowed us to work across the full range of ocean depths in the Coral Sea and to provide data for multiple disciplines including geology, biology, and oceanography*.”

James Cook University’s Robin Beaman said the expedition had provided scientists with a unique window into both the geological past and the current conditions of the reef, allowing scientists and park managers to be able to see and tell the full story of the interconnected environments.

“This vision is invaluable for science, management, and education,” he said.

They collected the first sample of ancient bedrock* beneath the Great Barrier Reef, estimated to be between 40 and 50 million years old.

The cruise also included the most comprehensive survey of midwater jellyfish in the South Pacific. This octopus was observed at nearly 1200m depth, during an exploration of the Ribbon Reef Canyons, about 170km northeast of Cairns. Picture: Schmidt Ocean Institute

High-resolution* mapping of the sea floor was conducted and covered 38,395 sqkm. In comparison, the entire Australian Capital Territory is only 2358 sqkm and Tasmania is 68,401 sqkm.

“They’re not always black, they tend to be more red in colour,” he told the ABC.

“When they die, though, the skeleton remaining is this beautiful jet black colour, which people sometimes see as pieces of jewellery in different parts of the world.

“It is completely cold, it is completely black, there is no sunlight down there. They’re entirely reliant on whatever food is drifting past in the water column in order to survive.” 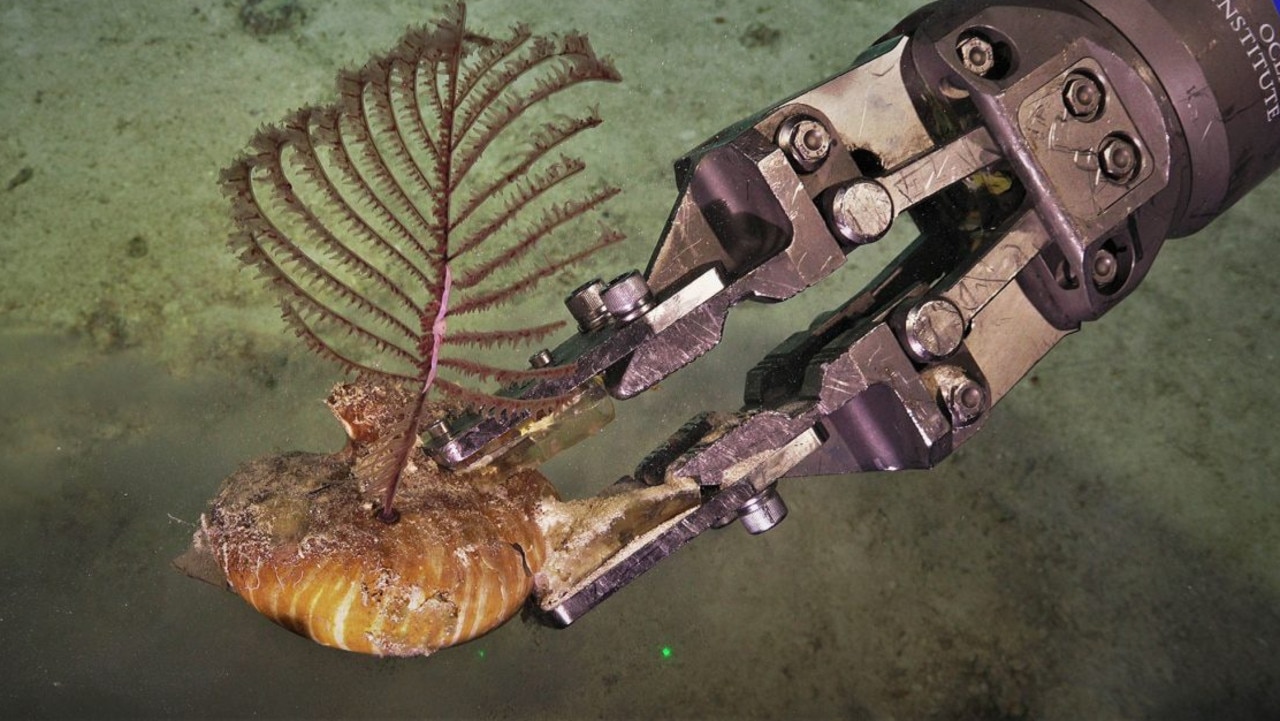 The robotic equipment gently grasps a black coral growing on a nautilus shell at a depth of 550m at Herald Cays in the Great Barrier Reef. Picture: Schmidt Ocean Institute

Who is the article about?

What have they done?

Where did they have the expedition?

Why did they go?

How did they do the research?

How much area did they cover?

What discoveries did they make?

Use these dot points to help you write a 3-4 sentence paragraph that summarises the article and still includes the important information.

2. Extension
Although there is other black coral in the world, this expedition discovered a new species of black coral. Use the description in the article and the photo to help you come up with a common name for this previously undiscovered coral.

Write an entry for this new species to be published in a marine life journal or nonfiction book. Your entry should include a picture you can draw, with a caption that has the details of where/when it was found and a short description of what it looks like so others can identify it.

HAVE YOUR SAY: What rare sea creature would you like to discover?
No one-word answers. Use full sentences to explain your thinking. No comments will be published until approved by editors.