Two of the world’s most active volcanoes are erupting.

Mt Merapi, Indonesia’s most active volcano, is erupting and sending ash 3km into the sky.

Almost 11,000km away in Italy, Mt Etna, Europe’s most active volcano, is spewing ash high into the air and lava down its sides.

MT ETNA
Etna began to erupt last Thursday when cracks in the volcano opened up.

It is only six months since Etna erupted in December, causing minor earthquakes that damaged buildings in the area.

Mt Etna is on the island of Sicily, which is part of Italy. Some people say Italy looks like a boot and Sicily looks like a football Italy is kicking.

Italian officials said the current eruptions are not dangerous for local people but tourists need to stay away.

Etna is a popular tourist destination and its eruptions, especially when seen at night, are spectacular to watch.

Eugenio Privitera, a director of Italy’s National Institute of Geophysics* and Volcanology*, said this eruption is taking place at the summit*.

He said this new active phase could be over quickly or it could go on for months. Mt Etna is also spectacular during the day. This photo was taken on Thursday, May 30, the day eruptions began. Picture: AP

The Italian news agency ANSA said the volcano’s activity has not yet caused problems for the nearby airport at the Sicilian city of Catania. An etching called “The eruption of Mount Etna in 1669”. Picture: Wellcome Library, London

MT MERAPI
Indonesia’s Mt Merapi has been showing signs of erupting since January and has sent 72 ash columns* into the sky since then.

There are fears that the current eruptions could cause a large lava avalanche that could move 3km from the crater towards the river Gendol.

Government news agency Antara reported some tremors at the crater of the volcano, which is a popular hiking spot on the border of Yogyakarta and Central Java provinces. Indonesian girls playing at a golf course in Sleman, near Yogyakarta, Indonesia, as a cloud of ash rises from Mt Merapi in 2006. Picture: AFP

“Based on those volcanic activities, the volcano status remains on caution alert level. A 3-kilometre radius exclusion* zone from the crater remains in place and tourist objects outside the exclusion zone are safe for tourists to visit,” Antara’s Hanik Humaida said.

Merapi’s last major eruption was in 2010. In May and June last year, people within 5km of the volcano evacuated and nearby Yogyakarta airport closed.

HAWAII UPDATE
The world’s most active volcano has been unusually quiet lately.

Kids News reported on Kilauea in May last year when many vents* opened up on the sides of the volcano. About 2000 people were evacuated from their homes as lava ran down the streets and caused a lot of damage.

There were explosions, a strong earthquake and lava ran into the sea.

By August, volcano activity had slowed and the last activity was reported in September.

The eruption that began in 1983 was officially declared over by December 5, 2018. 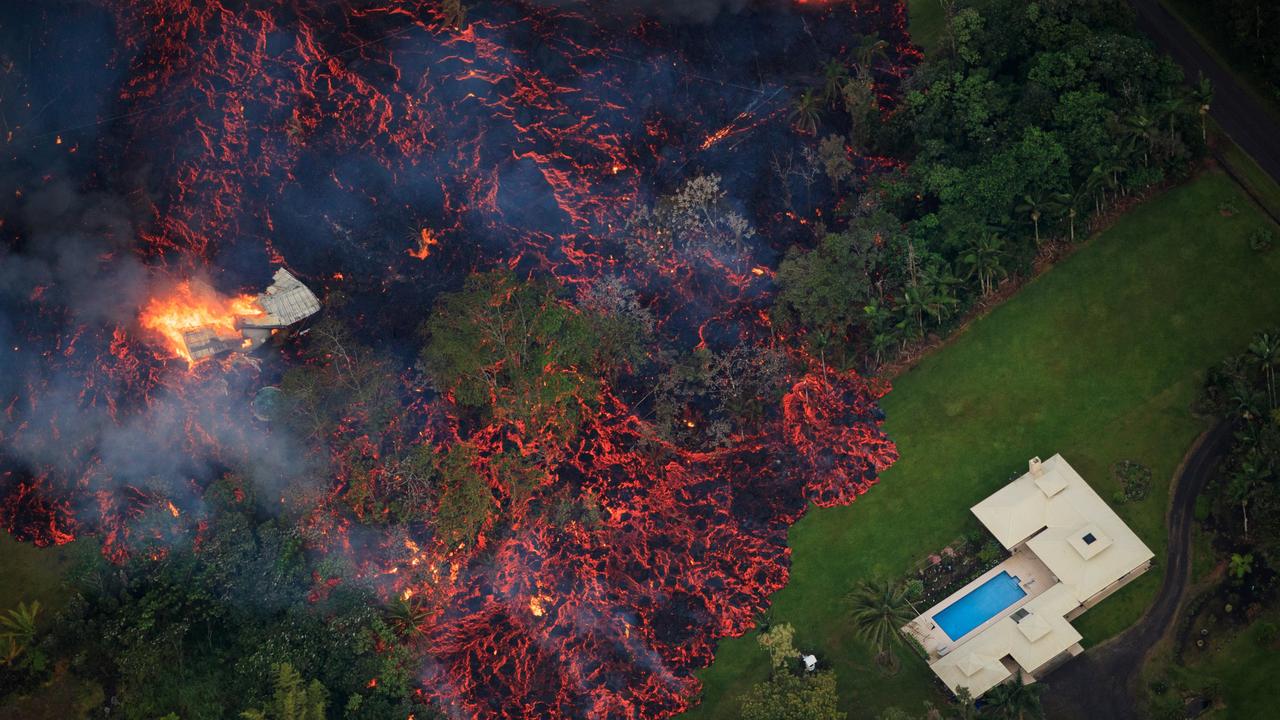 Lava from Mt Kilauea destroys a home and moves towards another in May 2018. Although the volcano caused a lot of damage to property, the lava moved slowly and people and their pets had time to evacuate from their homes so they could stay safe. Picture: EPA/Bruce Omori/Paradise Helicopters

EARTH’S PLATES
The crust of the Earth is broken up into big pieces called tectonic plates. Imagine the shell of a hard-boiled egg that is broken into several big pieces but stays in place around what’s inside. Some chocolate Easter eggs have markings on them that look a bit like tectonic plates.

The plates are about 100km thick.

Most scientists agree there are about seven major tectonic plates and about 10 smaller plates, plus some tiny plates.

Mt Etna sits above where two of Earth’s plates meet: the African Plate and the Eurasian Plate.

Mt Merapi sits above where the Indo-Australian Plate slides under the Eurasian Plate.

Hot magma* rises up to the surface of the Earth when the plates move apart.

Mt Kilauea is in the middle of the Pacific Plate, rather than where two plates meet.

Volcanoes can form in the middle of a plate when magma from the core of the Earth pushes up and makes a path to the surface to escape.

Why do volcanoes take so long to erupt?

CLASSROOM ACTIVITIES
1. Design a flowchart
Draw up a flowchart that shows your understanding of how and why volcanoes erupt.

2. Extension
Create an artwork inspired by the power and spectacular eruptions of volcanoes.

VCOP ACTIVITY
Using the video of Mt Etna erupting as a visual stimulus, write a paragraph describing a volcanic eruption that is set to cause disaster. You are creating a descriptive passage that can be inserted into a narrative, not retelling any of the eruptions in the article.
Use your VCOP to be very descriptive and build suspense.

HAVE YOUR SAY: Would you like to watch a volcano from a safe distance? Would you still be scared?
No one-word answers. Use full sentences to explain your thinking. No comments will be published until approved by editors.