Surgeons have operated on a 3D-printed brain Australian doctors have operated on a 3D-printed brain in a head modelled on Barack Obama.

An Adelaide company is 3D-printing human brains for surgeons to practice their techniques.

In the future, patients with brain tumours* and other neurological* conditions will have their own brain scanned and a version 3D-printed for surgeons to rehearse on before they operate on the real thing.

On Wednesday at Adelaide Uni’s Simlab, RAH neurosurgeon Adam Wells had a go at saving “Obama” – well, a brain inside a head modelled on the former US President – in what is believed to be a world-first operation. The model of Barack Obama’s head with the 3D printed brain in it that surgeon’s practised removing a tumour from. Picture: Tricia Watkinson

After the “spinal fluid” was put in, Mr Wells opened the skull with a saw, gently navigated through flesh and arteries* and scooped out a tumour.

Fusetec’s chief executive officer Mark Roe said the brains are a non-messy way to practice. And you can print brains with tumours in different places, or hidden aneurisms*, or rare conditions.

Mr Roe knew the capability of 3D printing technology, and worked out a way to use brain scans of real people and turn them into data that a printer can then turn into a replica brain.

“I was an entrepreneur* looking for a problem to solve. It took me a year to find that problem,” he said.

“I looked at defence, I looked at aerospace, and then I looked at medical. I spoke to surgeons and academics* and looked at the problems they were having.

“What kept coming up was they needed patient-specific models made so they could practice before they did the operation.” 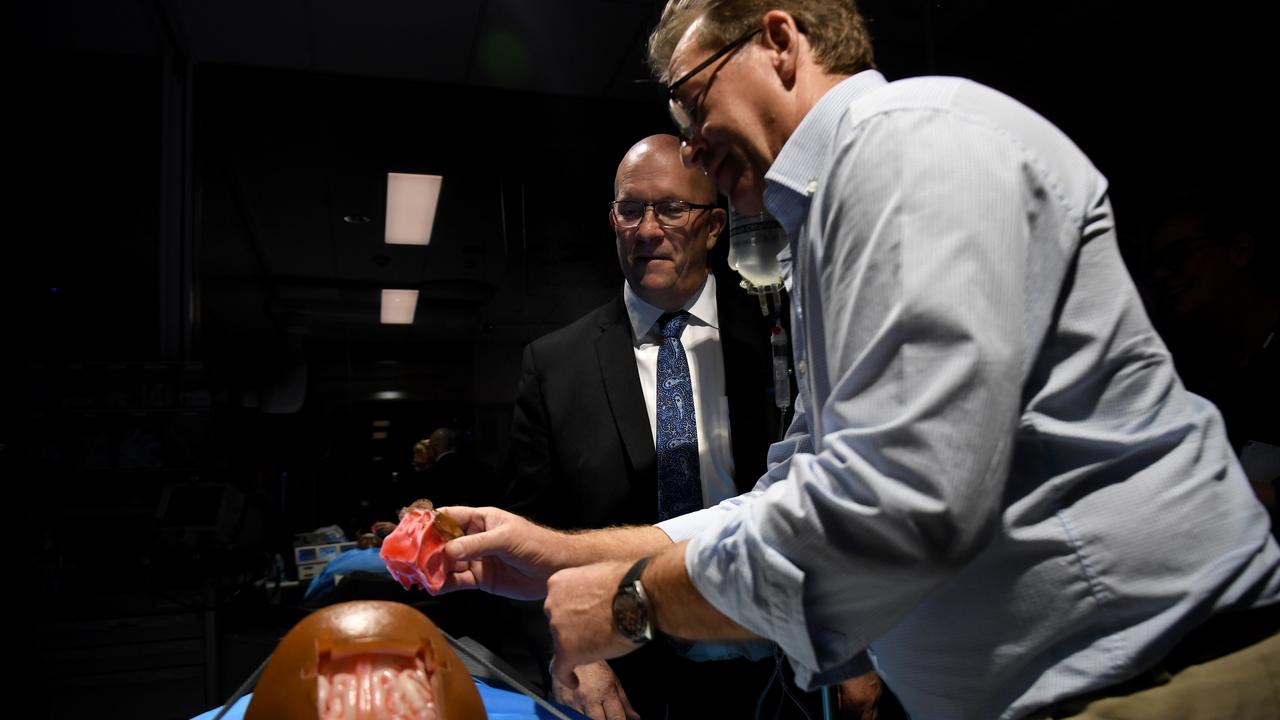 On Friday, 40 visiting surgeons from around the world will simultaneously* operate on 40 3D printed heads. It will be “surgical tourism”, Mr Roe said.

Dr Wells’ verdict was that there was a “high degree of realism” in the brains, and that it would improve students’ training. It would be very helpful to have practice surgery as well, he said, joking that “we can make mistakes and Obama’s not going to mind”. Rehearsing on a 3D printed brain is not messy and if you make a mistake it doesn’t matter. Picture: Tricia Watkinson

SA Trade Minister David Ridgway “discovered” Mr Roe on a China trade mission where the Fusetec boss was wandering around with a heart in his hand.

“People didn’t believe it was going to work and he just kept going and going,” he said.

“You can actually train on a paediatric* heart, a child’s heart, you can print 100 of them.

“This tech will continue to evolve, and it’s world-leading. Today’s the first time this has happened anywhere in the world.”

CLASSROOM ACTIVITIES
1. Write a sales speech
After some research Mr Roe found there was a problem in the medical field that he and his 3D printing company could help solve.

Mr Roe would have had to convince the university, hospital and surgeons that he would be able to help with their problem.

Pretend you are Mr Roe and write a speech that he may have given at a meeting with the hospital, university and surgeons to convince them to give his idea a try.

Draw up a two-column chart. In the left column make a list of skills and personal characteristics that you think would be helpful to an entrepreneur and why each would be helpful. In the second column look for evidence in the article that demonstrates that Mr Roe has these skills or characteristics. (Note: He may not have all of them or the evidence may not be there for all of them)

For example: To be an entrepreneur it would be good to be or have:

HAVE YOUR SAY: What would you like to print in 3D?
No one-word answers. Use full sentences to explain your thinking. No comments will be published until approved by editors.