Belgian student Laurent Simons has graduated from the University at Antwerp aged 11. He is pictured here at home in Amsterdam in 2019, after originally being accepted to Eindhoven University of Technology at the age of nine. Picture: Kenzo Tribouillard/AFP.

Most boys his age are obsessed with video games, wizards or football, but Laurent Simons has a big dream worthy of science fiction.

“Immortality*, that is my goal,” the 11-year-old boy genius told Belgian newspaper the Het Laatste Nieuws, a Dutch language publication.

“Not for myself, but for other people, by replacing as many body parts as possible with mechanical parts. I have mapped out a path to get there,” he said.

Laurent graduated last week from Belgium’s University of Antwerp with a degree in quantum physics* after enrolling aged nine. Now he hopes to use his incredible mind to make immortality possible for humans. Laurent Simons with his parents Lydia and Alexander Simons in 2019, the year he was accepted to university, aged just nine. Picture: Kenzo Tribouillard/AFP.

His Dutch mother, Lydia, said she was unable to keep up with his ideas.

“I think, wow. When he talks about his plans and about how he wants to realise them, I am just amazed. He tries to explain but I cannot understand it,” she said.

“I just go along with it. He tries to teach me. Sometimes he gets a little bit annoyed that I’m not completely following him. I am not at all an expert at quantum physics.”

While his parents sometimes get confused, Laurent’s creativity is a hit with academics.

“He has a lot of ideas and, from what I have heard – because I don’t understand anything about his work and studies – he has a very creative way of approaching problems,” his mother said.

Laurent, who has an IQ of 145, has been compared to the great Albert Einstein since he was eight, when he finished the secondary school curriculum* in just 18 months. Not that he sees the similarity himself.

“Laurent does not like comparisons with Einstein. He feels that he is unique in himself, just as everyone else is unique in themselves,” his mother said. 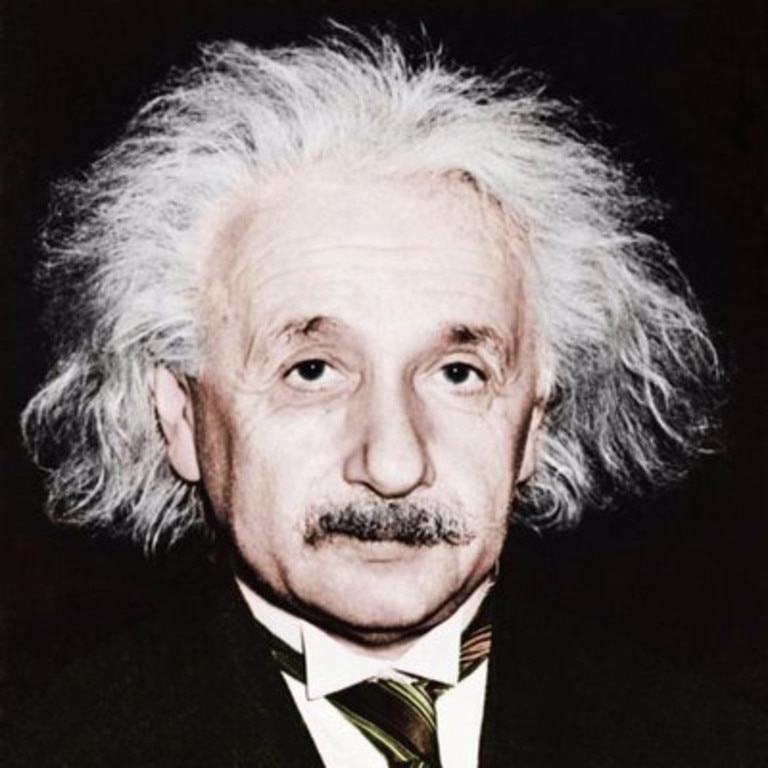 Albert Einstein (1879-1955) was a German-born theoretical physicist who developed the theory of relativity, one of the two pillars of modern physics. His work is also known for its influence on the philosophy of science. Picture: file copy.

Two years ago, Laurent said in an interview that it was, “funny that everyone talks about me as the new Einstein” when he saw himself as a practical inventor such as Einstein’s 19th Century contemporary Nikola Tesla, the Serbian-American electrical engineer.

It has not always been easy. When Laurent was very young, his parents were concerned that he struggled to play with other children and was not interested in toys.

In 2019, he dropped out of Eindhoven University of Technology in the Netherlands and his teacher spoke of ­“excessive* pressure”.

Today, his work-life balance is better, his mother said, and he puts his studies to one side to play with other children his own age.

“We are very careful to separate his study from his childhood,” she said. “When he is among his friends, he does not speak of his studies or science. It is just gaming or some silly race. He can separate it and that is good for him.” His Belgian father, Alexander, said after pandemic travel restrictions were lifted, Laurent would move to Britain, where he could stay with his uncle, Brian Simons, a well-known plastic surgeon*, until his parents joined him.

“We have been talking with a British university … we have to see what is legally possible as Laurent is a minor*. It was a long trajectory and then Covid came and we had to postpone everything,” he said.

Many of Laurent’s university teachers have been British, and his father said Laurent liked their “way of thinking”.

“He has already spoken a lot to his new mentor* in Britain and seems to get along very well,” his father said.

This article originally appeared in The Times and is reprinted from The Australian with permission.

CLASSROOM ACTIVITIES
1. Child Genius
Being as gifted as Laurent would have its challenges and opportunities. Divide your page into quarters under the four SWOT headings (Strengths, Weaknesses, Opportunities, Threats) to analyse how Laurent might feel about being so talented and smart at such a young age.

2. Extension
Laurent has already finished a Physics degree at age 11. What would you like to see him do with his life?

What opportunities does he have to make a positive impact on the world?

Would you like to be Laurent’s friend? Write him a short letter.