A giant larvacean and its mucus filter that the animal uses to collect food. When it gets clogged, the creature abandons it and it sinks to the sea floor to become food for other marine animals. Picture: Monterrey Bay Aquarium Research Institute via AP

Scientists are now closer to solving the mystery of how tiny sea creatures build the equivalent of complex five-story palaces from snot coming out of their heads.

Learning how they build these so-called “snot palaces” could one day help humans build expanding homes on Earth, the Moon or Mars.

The delicate mucus* structures protect the sea creatures — called giant larvaceans — from predators and funnel and filter food for them. When the structures get clogged, the tadpole-looking critters build a new one, usually every day or so.

Her team took a step toward solving the mystery of the snot houses and maybe some day even recreate them, according to a study published in the journal Nature.

The creatures inside these houses are tiny — the biggest are around 10cm — but they are smart and crucial* to Earth’s environment. Found globally, they are the closest relatives to humans without a backbone, Dr Katija and other scientists said. Close-up view of a giant larvacean and its mucus filter. Picture: MBARI via AP

Together with their houses “they are like an alien life form, made almost entirely out of water, yet crafted with complexity and purpose,” said Dalhousie University marine biologist Boris Worm, who wasn’t part of the study. “They remind me of a cross between a living veil and a high tech filter pump.”

Also, when they abandon their clogged homes about every day, the creatures collectively* drop millions of tonnes of carbon to the sea floor, where it stays, preventing further global warming, Professor Worm said. They also take microplastics out of the water column and dump it on the sea floor. And if that’s not enough, the other waste in their abandoned houses is eaten by the ocean’s bottom dwellers.

But it’s what they build that fascinates and mystifies scientists. Because the snot houses are so delicate, researchers haven’t often been able to take them to the lab to study them. So the scientists used a remote submarine, cameras and lasers to watch these creatures in water about 200-400m deep off Monterey Bay in Northern California, US. 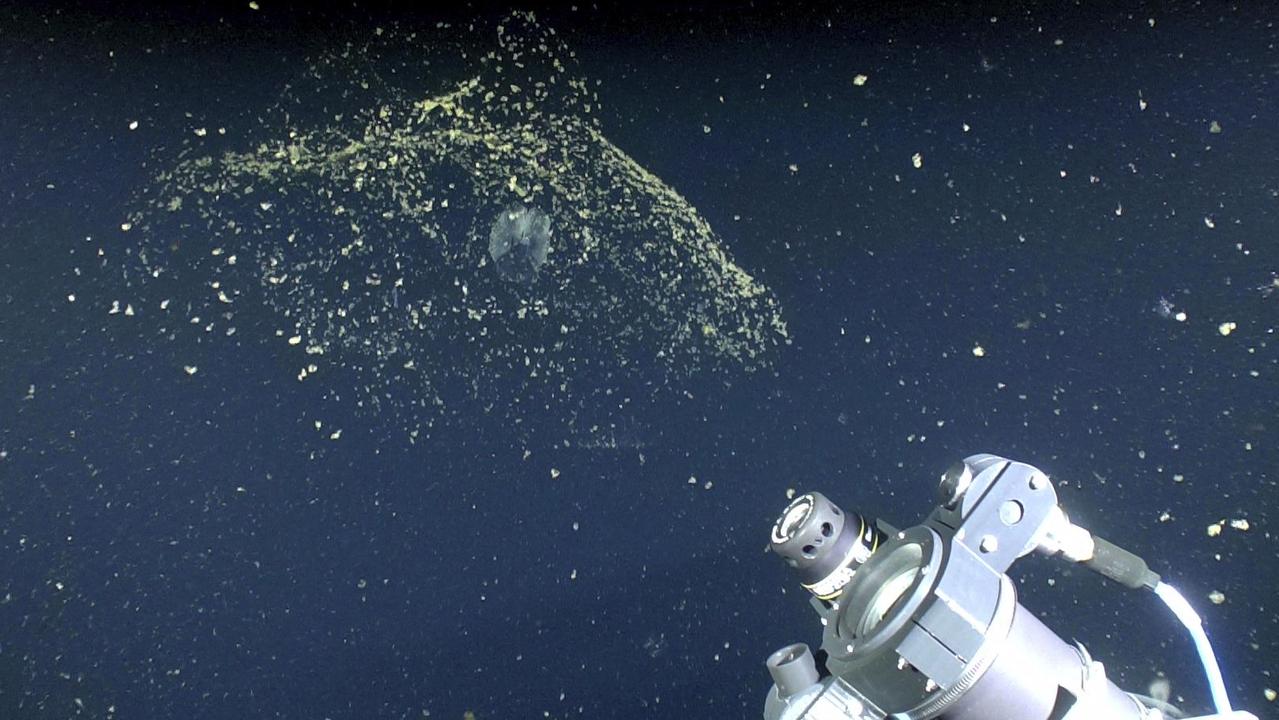 The inner and outer houses of a giant larvacean, left, and the laser and camera used to capture the image. Picture: MBARI via AP

Dr Katija’s team used 3D laser scan technology to virtually fly through the inner chambers of the snot palaces, then recreated them with software to model the inner-workings of the structure.

These complex mucus structures include two heart-like chambers that act as a maze for the food that drifts in, except there’s only one way for it to go: into the larvacean’s mouth. The snot houses often are nearly transparent and flow all around the tadpole-looking creature.

“It could be the most kind of complex structure that an animal makes,” Dr Katija said. “It’s pretty astonishing that a single animal is able to do it.”

The houses are relatively big — about 10 times bigger than the creatures themselves — reaching more than 1m across. It would be the equivalent of a person making a five-story house, Dr Katija said.

“They create these small versions of houses by secreting mucus from cells on their heads and then expand those much like a balloon into the structures that we see,” she said.

And they do it in about an hour.

Water can flow through the structure so that when it moves through the water predatory fish find it difficult to sense that its nearby. That, Dr Katija said, essentially masks the house from whatever wants to eat the larvaceans.

NASA engineers looking to build structures on the Moon would probably like to learn from the larvaceans, she said.

But she said the scientists are still far from understanding everything going on there. CLASSROOM ACTIVITIES
1. Find the facts!
While this article is not specifically about larvaceans (more about the houses they create) there is a lot of information about them in here. Read through the article carefully and make a note of all the facts you can find about these creatures.

Use this list of facts to help you write a paragraph describing larvaceans to someone who has never heard of them.

2. Extension
What an amazing ability these creatures have; to be able to build a house from mucus that secretes from the top of their head.

These ‘snot palaces’ are perfectly designed for helping this species survive.

Draw a labelled diagram of this creature and the ‘snot houses’ they create. Identify the features of these houses that help the ‘larvacean’ to survive in its environment (for example: it funnels prey directly into its mouth).

If you could create your own house perfect for your survival what would it look like? It needs to be built suited to the environment you live in. Draw a picture of your perfect house and label the features it has to help you survive.

HAVE YOUR SAY: What is your favourite sea creature? Why?
No one-word answers. Use full sentences to explain your thinking. No comments will be published until approved by editors.