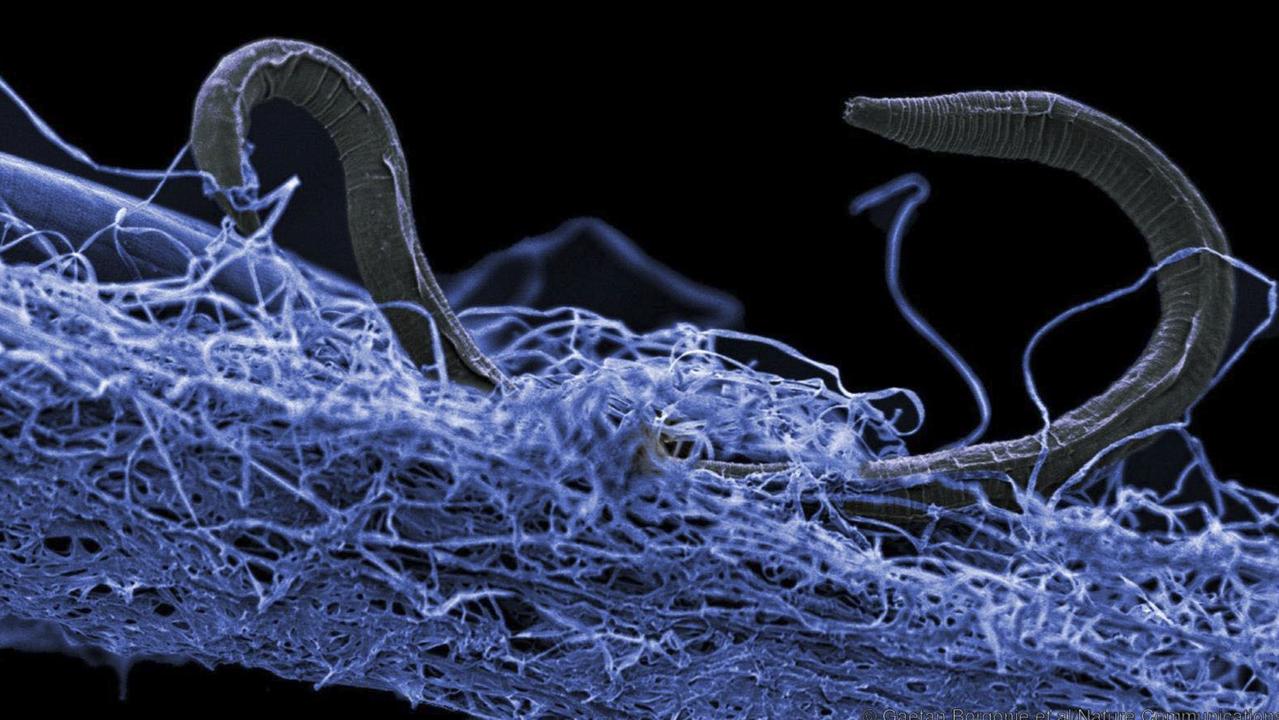 A nematode (eukaryote) in a biofilm of microorganisms, from Kopanang gold mine in South Africa, which lives 1.4km below the surface. Picture: AFP/Gaetan Borgonie

Scientists have drilled 2.5km deep beneath the ocean floor and found massive underground forests of life, including tiny organisms* that live for thousands, maybe millions of years.

They feed on the energy from rocks and live in a slow-motion, zombie-like state. And they exist in huge quantities, despite extreme temperatures and pressure.

About 70 per cent of Earth’s bacteria and archaea — single-celled organisms with no nucleus* — live underground, according to the latest findings from the Deep Carbon Observatory (DCO). DCO’s findings were released at the American Geophysical* Union meeting in Washington, US. Cells in this cluster of archaea (red) and bacteria (green) work together to harvest energy at sea floor seeps. These organisms have very slow growth rates with a minimum doubling time of a few months, making them very difficult to cultivate and study in the lab. Picture: Katrin Knittel

DCO is a team of hundreds of researchers from around the world that started working together in 2009 and is nearing the end of its 10-year mission to reveal Earth’s inner secrets.

“The deep biosphere* of Earth is massive,” said Rick Colwell, who teaches at Oregon State University, US.

He described the team’s findings so far as a “very exciting, extreme ecosystem*.”

Among them may be Earth’s hottest living creature, Geogemma barossii, a single-celled organism found in hot-water vents on the sea floor. It grows and multiplies at 121C.

“There is genetic diversity* of life below the surface that is at least equal to but perhaps exceeds that which is at the surface and we don’t know much about it,” Prof Colwell said. 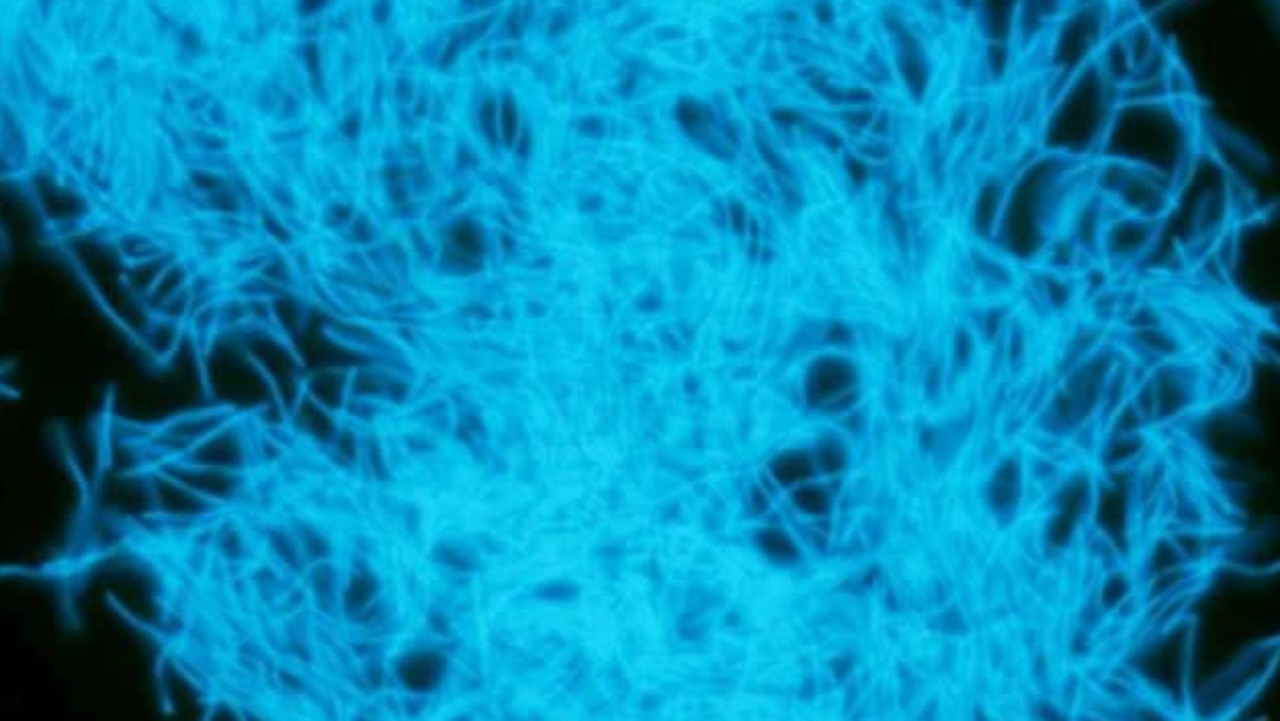 This is a species of bacteria which produces a gas called methane. Found in samples from a buried coal bed 2km below the Pacific Ocean floor off the coast of Japan. Picture: supplied

DIFFERENT TO SURFACE LIFE
Similar types of strange, deep-life microbes may be found below the surface of other planets, such as Mars.

“Most of deep life is very distinct from life on the surface,” said Fumio Inagaki, of the Japan Agency for Marine-Earth Science and Technology.

Using the Japanese scientific ship Chikyu, researchers drilled far beneath the seabed and removed samples that have given scientists a detailed look at deep life.

“The microbes* are just sitting there and live for very, very long periods of time,” he told AFP.

Brought up from these ancient coal beds and fed glucose (a sugar), in the lab, researchers have seen some microbes, bacteria and fungi slowly waking up.

“That was amazing,” said Dr Inagaki.

Scientists have found life more than 5km deep, and have not yet identified the boundary beyond which life no longer exists, he added. The expedition pioneered the use of seabed rockdrills with sensors capable of monitoring conditions during drilling. Picture: supplied

WHY DO THIS RESEARCH?
Understanding life below the surface of Earth could help us understand how to manage climate change.

One of the challenges in coping with climate change is to find ways to store the carbon released when we burn fossil fuels such as oil and coal. Carbon is an element, or pure substance, in living or once-living things.

This “deep life” is a massive store of carbon, between 13.6 and 21 billion tonnes, said the DCO.

Our planet’s life deep beneath the surface may have played a big part in the evolution of Earth’s atmosphere. By locking carbon underground it “cleans up” the air above ground for people and animals to exist.

“What we learn here will help us understand what to look for on other planets or other systems where life could exist,” said Prof Colwell.

Studying what some scientists have called the “Galapagos* of the Deep,” also changes the way we think about life on Earth, and their place in it.

“There is lots and lots of life on Earth that we did not know about. The fact that so much of it — at least in the marine sediment* — is functioning at extremely low energy, it really changes our basic conception* of how biology works,” said Karen Lloyd, an associate professor at the University of Tennessee at Knoxville, US.

“They are new branches on the tree of life that have been on Earth, doing whatever it is that they do, for billions of years, but without us ever noticing them,” she said.

“It is like looking beside you and finding that you have an officemate you never knew about.” Deep Carbon Observatory image of a microorganism called a nematode sitting in a cluster of other microorganisms found 1.4km below ground in South Africa. Picture: AFP/Gaetan Borgonie

Mountains found beneath the ocean

Giant invention cleaning up the ocean

CLASSROOM ACTIVITIES
1. Three things
Choose the three most interesting or important things that you have learned in today’s story. Think of a fun and interesting way that you can help other students learn about one of these things — a song, rap, cartoon, story, artwork, joke, game … anything! Then make or create it.

2. Extension
Scientists think that the deep life under the ocean floor can be used to store carbon to help keep our air clean. How do you think this could work? Create a design or a plan for an invention that you think could do this job. Don’t forget to include a description and labels showing different parts of your plan and how they would work.

HAVE YOUR SAY: If you wrote a story or made a movie about life deep below the surface of the Earth or another planet, what would you call it? Share what happens in the story.
No one-word answers. Use full sentences to explain your thinking.