A tangled mass of fish fossils uncovered in North Dakota, US. The site appears to date to the day 66 million years ago when a meteor hit Earth, killing nearly all life on the planet. Picture: AFP

Scientists have discovered a fossilised snapshot of the day a huge asteroid slammed into Earth.

The asteroid’s impact 66 million years ago caused the mass extinction of dinosaurs and cleared the way for the rise of mammals, including humans.

On that day, fire rained from the sky and the ground shook far worse than during any modern earthquake.

The team of palaeontologists* has called this find in North Dakota, US, thousands of kilometres from the asteroid site, a “mother lode* of exquisitely* preserved anima­l and fish fossils”.

Their findings are published in a journal called Proceedings of the Academy of Natural Sciences.

The asteroid’s impact at Chixculub, in what is now Mexico, is the biggest Earthly disaster known, wiping out 75 per cent of the planet’s animal and plant specie­s and extinguishing* the dinosaurs.

Researchers believe the impact set off fast-moving, seismic* surges* that triggered a sudden, massive inland tsunami of water and debris* from an arm of an inland sea known as the Western Interior Seaway.

The researchers, from the University of Kansas in the US, found the mass of fossils at the Tanis site in North Dakota­’s Hell Creek Formation. There, the surge left “a tangled mass of freshwater fish, terrestrial* verteb­rates, trees, branches, logs, marine ammonites* and other marine creatures”, according to Robert DePalma, the report’s lead author. 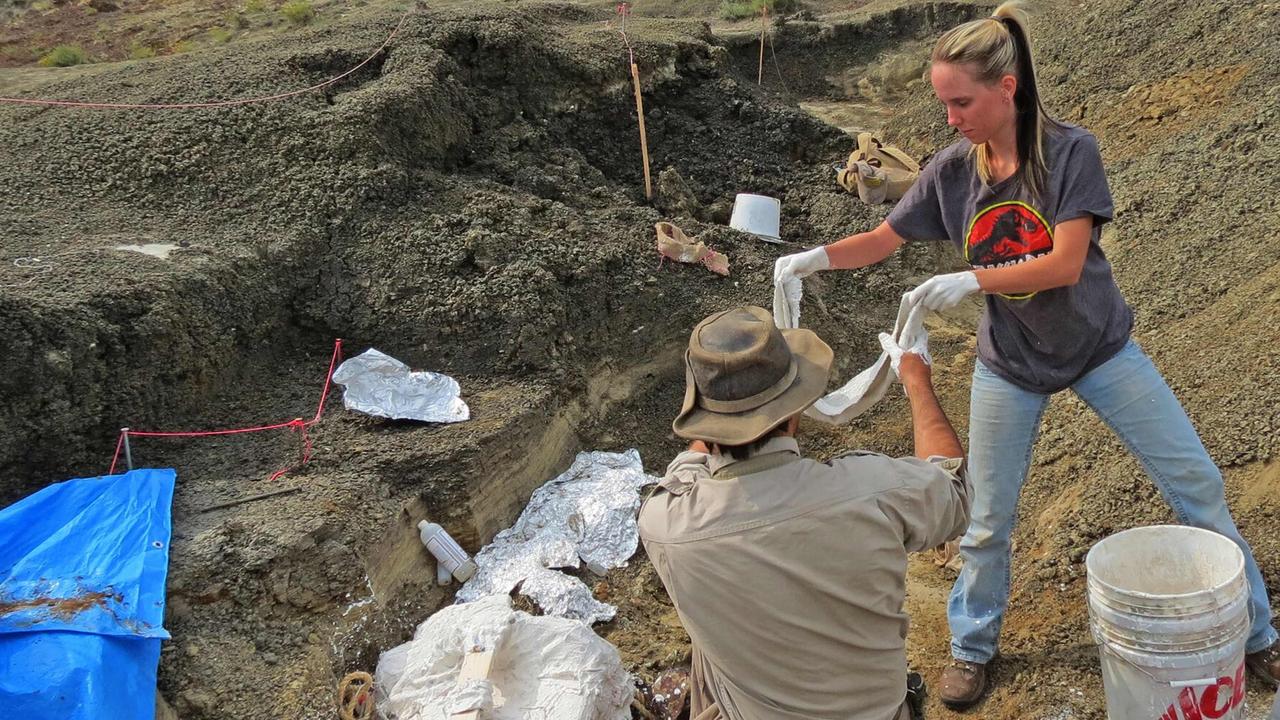 Some of the fish fossils were found to have hot glass in their gills from flaming debris that showered back down on Earth. They also reported the discovery of charred trees, evidence of an inland tsunami and melted amber.

That the fish inhaled “ejecta*” associate­d with the asteroid, suggests seismic surges reached North Dakota within tens of minutes. North Dakota is a state on the US-Canada border, many thousands of kilometres from where the asteroid hit.

“The sedimentation* happened so quickly everything is preserved in three dimensions — they’re not crushed,” said co-author David Burnham.

“It’s like an avalanche that collapses­ almost like a liquid, then sets like concrete. They were killed pretty suddenly because of the violence­ of that water. We have one fish that hit a tree and was broken­ in half.”

The fossils at Tanis include what were believed to be several newly identified fish species, and others that were “the best examples­ of their kind”, said Mr DePalma, a graduate student and curator* of the Palm Beach Museum­ of Natural History in Florida, US. “We look at moment-by-moment records of one of the most notable impact events in Earth’s history. No other site has a record quite like that. “And this particular event is tied directly to all of us — to every mammal on Earth, in fact. Because this is essentially where we inherited the planet. Nothing was the same after that impact. It became a planet of mammals rather than a planet of dinosaurs.”

Some have expressed concern about the credibility* of the findings because the research site hasn’t been studied by scientists outside the group that wrote the paper.

There are scientists who believe that volcanic activity contributed to the mass extinction of the dinosaurs. An artist’s impression of what the Earth could have looked like from space the day the huge asteroid hit Mexico’s Yucatán Peninsula 66 million years ago. Picture: AFP

CLASSROOM ACTIVITIES
1. Artist’s Impression
The details in this article describe a very dramatic day in the Earth’s history. Close your eyes and imagine the day that the asteroid ‘slammed into Earth’. What could be seen?

Chose an art medium that is readily available (pencils, crayons, pastels, paint, markers, collage materials etc) and on an A3 piece of poster paper create a picture that captures what this very significant day in the earth’s history might have looked like. Use details from the article to help you.

2. Extension
Do some research to find out how fossils are formed.

Create a simple flow chart that shows the conditions that allow fossils to form. There are a number of ways that fossils can form, on your flow chart highlight the way you believe the fossils formed at this site.

HAVE YOUR SAY: Do you think an asteroid killed the dinosaurs?
No one-word answers. Use full sentences to explain your thinking. No comments will be shown until approved by editors.