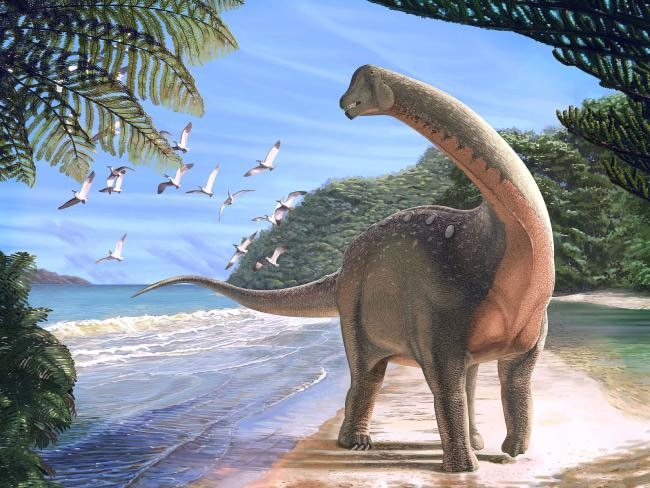 What scientists believe the dinosaur would have looked like. Source: AFP

A long-necked dinosaur unearthed in the Sahara desert has provided the first evidence of contact between African and European dinosaurs shortly before the creatures became extinct* .about 66 million years ago, scientists say.

Given a lack of dinosaur skeletons from Africa, palaeontologists* have battled to reconstruct a map of how the animals spread across the world after the “supercontinent” Pangaea* broke up into different land masses some 200 million years ago.

Many believed Africa’s dinosaurs were completely isolated* from cousins on other continents by the time their lifetime was brought to an abrupt end, possibly by an asteroid* strike. A reconstruction of the titanosaurian dinosaur Mansourasaurus shahinae on a coastline in what is now the Western Desert of Egypt, approximately 80 million years ago.Source: AFP

Looking at its physiology*, the team decided that Mansourasaurus was “more closely related to dinosaurs from Europe and Asia than it is to those found farther south in Africa or in South America,” according to a statement from Ohio University.

“This, in turn, shows that at least some dinosaurs could move between Africa and Europe near the end of these animals’ reign. Africa’s last dinosaurs weren’t completely isolated.”

Very few dinosaur fossils from the late Cretaceous period, about 100 to 66 million years ago, have been unearthed on the African continent.

Discovered in the Sahara Desert in Egypt, Mansourasaurus is the most complete dinosaur skeleton from the late Cretaceous era (66 to 100 million years ago) ever found in Africa.

The remains include scattered bits of the creature’s vertebrae, skull, lower jaw, ribs, and leg bones.

Mansourasaurus is a titanosaur, a group which included some of the biggest land animals ever to have lived.

“When I first saw pics of the fossils, my jaw hit the floor,” said study co-author Matt Lamanna of the Carnegie Museum of Natural History.

“This was the Holy Grail* — a well-preserved dinosaur from the end of the Age of Dinosaurs in Africa — that we palaeontologists had been searching for a long, long time.”

extinct: a species or group having no living members

Pangaea: a supercontinent that existed before it broke into our current seven continents.

isolated: situated far away from other places, buildings, or people/animals

physiology: the way in which a living organism or bodily part functions.

Holy Grail: a thing which is eagerly pursued or sought after

1. Why is the discovery of Mansourasaurus important?

List all of the things that you can find in the story that helped you to answer this question.

Think about at least three things we don’t know about Mansourasaurus. Write them down and for each one, write a sentence explaining why you think that this would be important for us to know.

In the story you read about ‘Pangaea’ the ‘supercontinent’. Find out more about Pangaea. Use the information that you have found to draw or make a map of Pangaea that shows how our continents came from it.

Kids News loves reading your best grammar, vocabulary and spelling. We will publish the best comments.