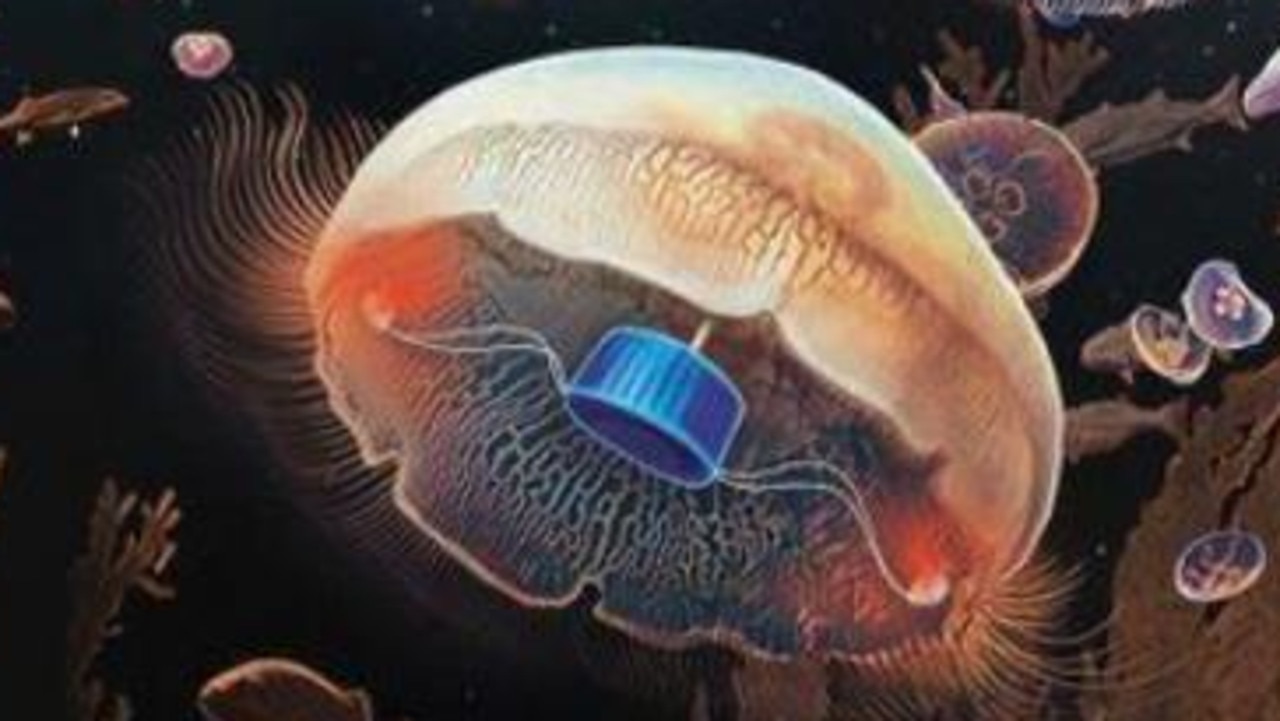 It may sound more like science fiction than science fact, but researchers have created bionic* jellyfish to help monitor and explore the world’s oceans.

The scientists have placed microelectronics* into a common type of jellyfish called moon jellyfish and will test ways to control where the jellyfish go and develop tiny sensors* that could perform long-term measurements of ocean conditions such as temperature, salt levels, acidity*, oxygen levels, nutrients and microbial* communities.

A small prosthetic* enables the jellyfish to swim three times faster and more efficiently without causing any apparent stress to the animals, which have no brain, central nervous system or pain receptors*, the researchers said.

“It’s very sci-fi futuristic,” said Stanford University bioengineer Nicole Xu, co-author of the research published this week in the journal Science Advances. “We could send these bionic jellyfish to different areas of the ocean to monitor signs of climate change or observe natural phenomena*.” An artist’s impression of the jellyfish with a microelectronics implant designed by researchers Nicole Xu and John Dabir. Picture: Rebecca Konte/Caltech/via Reuters

One of the first goals will be deep dives because measurements at great depths are a major gap in our understanding of the oceans, said California Institute of Technology mechanical engineering professor John Dabiri, the study’s other co-author.

“Basically, we’d release the bionic jellyfish at the surface, have it swim down to increasing depths, and see just how far we can get it to go down into the ocean and still make it back to the surface with data,” Prof Dabiri added.

Jellyfish propel* themselves through the water by contracting their muscles to collapse their umbrella-shaped body, and then relaxing. The prosthetic — basically a chip, battery and electrodes* that stimulate* the muscle — causes the jellyfish to pulse their bodies more frequently, similar to how a pacemaker* regulates heart rate. The prosthetic is 2cm in diameter.

Jellyfish are known to release mucus* when stressed. No such reaction occurred during the research and the animals swam normally after the prosthetic was removed, the researchers said.

“Care is taken not to harm the jellyfish,” Prof Dabiri said.

“Jellyfish have existed for over 500 million years, and over that time, their body structure has remained largely unchanged, so it’s interesting to figure out what makes them so special and how we can learn from them,” Ms Xu said.

“Because we use animals with natural swimming motions, the hope is that they won’t disturb the environment in the same way that a submarine might, so we can expand the types of environments we can monitor,” she added.

CLASSROOM ACTIVITIES
1. Evidence of ethics
When conducting research that involves live animals, scientists must consider the ethics of their actions. That is, whether there will be harm to the animal and if there will, do the potential benefits of the research outweigh the harm to the animal?

There is lots of evidence within this article to show that Ms Xu and Prof Dabiri have considered this. Print or copy and paste this article and then highlight all of the parts that show that the ethics of the research have been considered.

2.Extension
Based on the description in the article, draw a labelled diagram to show how a jellyfish moves through the water.

HAVE YOUR SAY: Do you think it is right to add prosthetics and microelectronics to animals to help humans monitor climate change?
No one-word answers. Use full sentences to explain your thinking. No comments will show until approved by editors.