A Paris zoo has unveiled a mysterious new organism, nicknamed The Blob, a yellow, single-celled*, living thing that looks like a fungus but acts like an animal.

The new exhibit of the Paris Zoological Park, which went on display to the public on Saturday, has no mouth, no stomach and no eyes, yet it can detect food and digest it.

The Blob can also move without legs or wings, heals itself in two minutes if cut in half and has many different genetic variations, which means it has around 720 sexes.

“The Blob is a living being which belongs to one of nature’s mysteries”, said Bruno David, director of the Paris Museum of Natural History, which includes the Zoological Park.

“It surprises us because it has no brain but is able to learn (…) and if you merge* two blobs, the one that has learned will transmit* its knowledge to the other,” Mr David added.

When The Blob was put in a maze, it took the best way out of the maze to find its food. It also learned how to get past a barrier of salt to get its food. One food the zoo has tried giving it is oatmeal — which is rolled oats, or porridge — which it seemed to like.

A study in 2016 found the species didn’t like coffee and could learn to avoid it.

The Blob was named after a 1958 science-fiction horror movie in which an alien life form — The Blob — consumes everything in its path in a small US town.

And though the nickname of the creature in Paris suggests it is blob shaped, it sometimes spreads itself out into thin, veinlike threads.

“We know for sure it is not a plant but we don’t really (know) if it’s an animal or a fungus,” said David.

“It behaves very surprisingly for something that looks like a mushroom (…) it has the behaviour of an animal, it is able to learn.”

At the Paris zoo, The Blob lives on tree bark in a terrarium, which is a sealed glass container with a humid atmosphere. Physarum Polycephalum, better known as the blob, on October 16 at the Paris Zoological Park. Picture: AFP

The scientific name of the mystery blob is Physarum polycephalum. People often describe it as a slime mould, though it’s not mould, which is a type of fungus.

The species has probably been on Earth for about a billion years but the first known sighting was in the 1970s by a woman in Texas, US, in her backyard.

In the living world, there are animals, plants and fungi. The Blob is not any of those things, so scientists consider it a protist, which is a category to put things in they don’t understand. 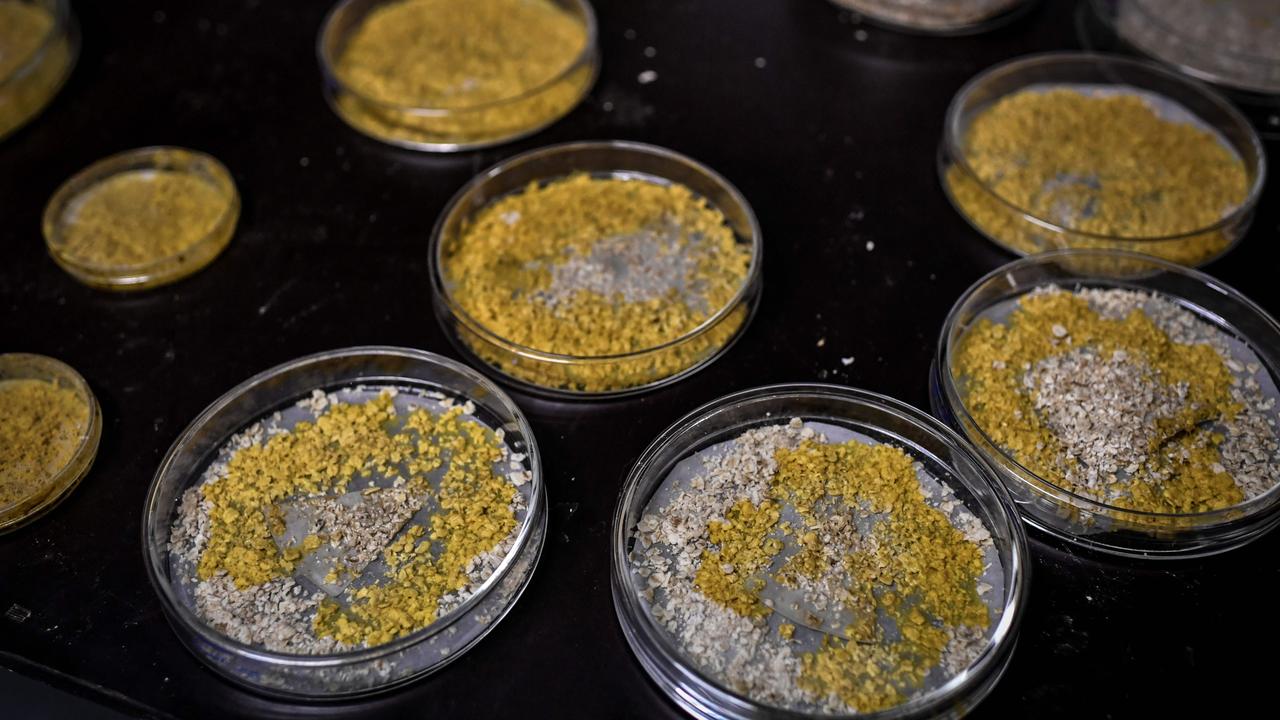 Petri dishes containing cultures of Physarum Polycephalum as part of an experiment to grow more blobs at the Paris Zoological Park. Picture: AFP

CLASSROOM ACTIVITIES
1. Explain the exhibit
If you have ever visited a zoo or a museum, you will know that each exhibit includes signage, clearly stating what the exhibit is and some information about it — usually the key facts plus something that is particularly interesting. Use the information available in the news story to create a sign that could go on display at The Blob’s zoo exhibit. As well as including suitable factual information, ensure that your sign is easy to read and looks appealing.

2. Extension
Scientists studying The Blob have done some experiments such as testing if it can find the way out of a maze to get to its food and what happens if it is cut in half. Write a paragraph about something you would like to know about The Blob and explaining an experiment that could be done to find out the answer.

VCOP ACTIVITY
Friend or foe
In the videos of The Blob (which is shown at high speed rather than real-time), The Blob seems to be taking over the area at a rapid rate. Decide if The Blob is friendly or not and write a narrative about an encounter you had with The Blob when you visited the Paris Zoo.

Use your VCOP skills to add voice and suspense.

HAVE YOUR SAY: What would you teach The Blob to do if you had one as a pet?
No one-word answers. Use full sentences to explain your thinking. No comments will be published until approved by editors.