The new device picks up facial telltales of lying – although Pinocchio still holds the title for biggest giveaway. Picture: iStock

A new form of lie detector* that reads a person’s face to judge whether they are telling the truth has been invented in Israel.

In early-stage testing, the device was able to tell more than 70 per cent of the time when somebody was telling a basic lie.

The test uses plaster-like patches that are stuck to the cheek muscles close to the lips and the muscles over the eyebrows. The patches contain electrodes* that monitor and measure the activity of muscles and nerves.

Activity is then assessed by a computer, which uses “machine learning” to try to recognise patterns that signal that a lie is being told. 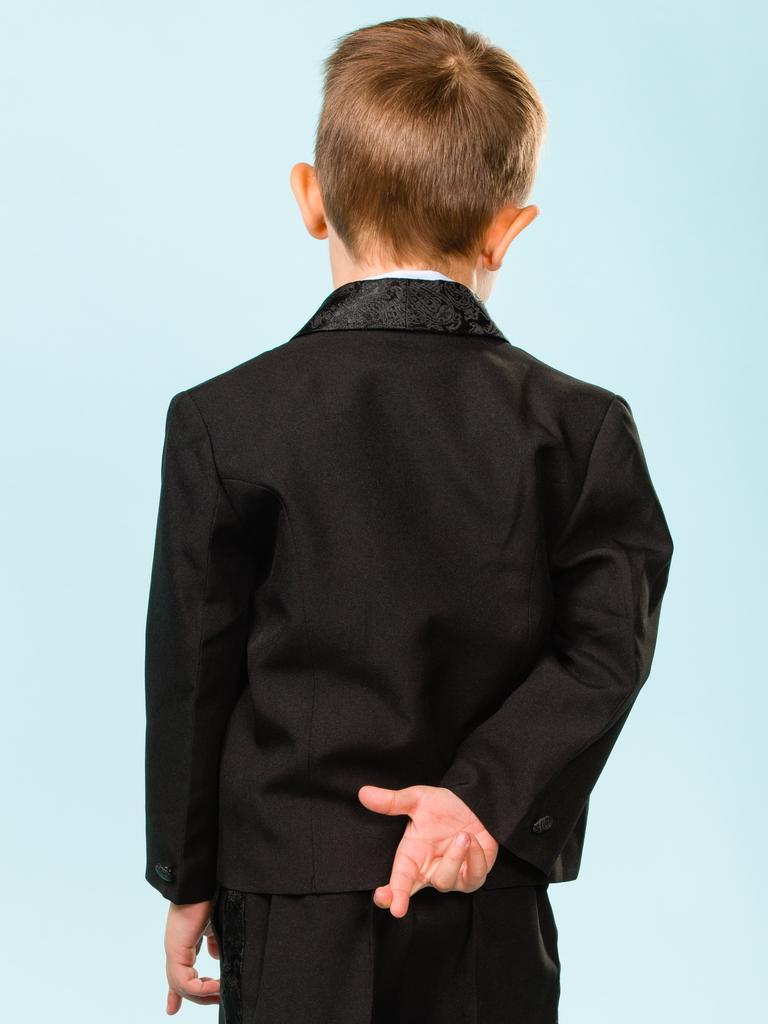 Kids usually have a few tricks up their sleeves when they aren’t telling the truth – but what does the movement of facial muscles reveal? Picture: NRM

In an experiment, volunteers were asked to sit in pairs facing one another, with one wearing headphones through which the words “line” or “tree” were transmitted*.

When the wearer heard “line” but said “tree” or vice versa, and the partner’s task was to try to catch the “lie”.

The new device was able to tell when somebody told a basic lie more than 70 per cent of the time.

The two subjects then switched roles. Participants were not able to detect their partners’ “lies” any more than would be possible from chance alone. However, the computer correctly identified lies 73 per cent of the time. The traditional polygraph test has a patchy history, with some experts saying the results cannot be trusted – which is ironic when you consider it is a lie detector.

It’s hard to say how that score compares with traditional polygraph* tests, which monitor heart rate, respiration* and skin conductivity*. Polygraphs are usually used in very different circumstances and have a ­patchy record.

The accuracy of polygraphs is fiercely disputed*. Advocates* claim that in the right hands they can achieve levels of accuracy of 80 per cent or more; other experts say they cannot be trusted, in part because people can learn how to influence the results. Dino Levy, of Tel Aviv University, a co-author of the research, conceded that research into the facial technique was at an early stage.

“Since this was an initial study, the lie itself was very simple,” he said. “Usually when we lie in real life, we tell a longer tale which includes both deceptive and truthful components.”

Professor Levy believes, however, that machine learning systems could be taught in future to monitor facial muscles for giveaway signs of dishonesty.

“An interesting discovery was that people lie through different facial muscles – some lie with their cheek muscles and others with their eyebrows,” he said.

“Many studies have shown that it’s almost impossible for us to tell when someone is lying to us. Even experts, such as police interrogators*, do only a little better than the rest of us.

“Existing lie detectors are so unreliable because just about anyone can learn how to control their pulse and deceive the ­machine.”

The study was published in the Brain and Behaviour journal.

This story was originally published in The Times and is reproduced with permission.

Why some sounds drive us crazy

CLASSROOM ACTIVITIES
1. Lie test with a friend
Sit opposite a friend from your class so you can observe their facial expressions closely. Ask them to state three things about themselves. Two of them should be true, one should be a lie. See if you can pick which one is a lie.

If you were correct, tell your partner why you think they were lying in that statement. Was it because of the way they acted or how their face looked, or did it just sound like a made up statement?

Switch roles and let the other person have a go.

2. Extension
The Kids News article refers to a “basic” lie. How does that differ from other types of lies?

What facial expressions or body language do you believe suggest people aren’t telling the truth?

Would you be willing to take a polygraph test to prove your innocence to the police?