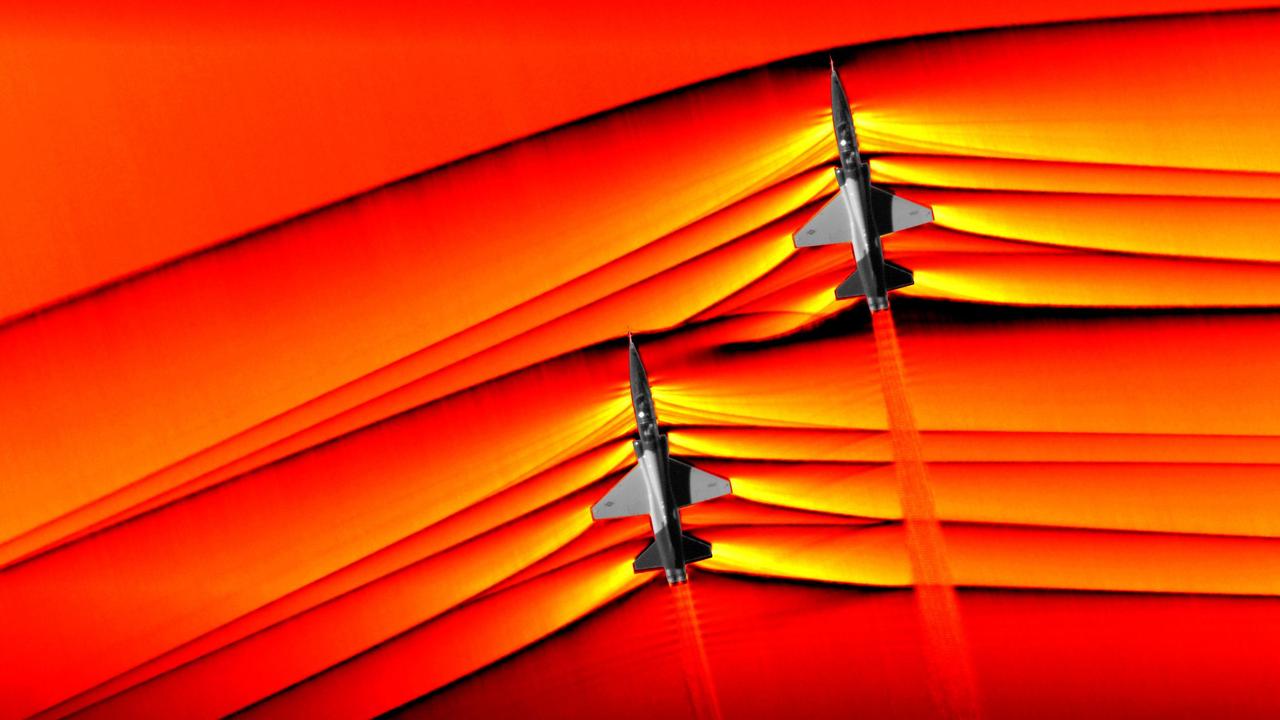 Two T-38 aircraft flying in formation at supersonic speeds producing shockwaves that are heard on the ground as a sonic boom. NASA has been able to “see” the shockwaves moving around the planes. Picture: AFP/NASA

The incredible images will help NASA better understand how supersonic waves work and further its quest* to design supersonic aircraft that quietly rumble rather than boom when they crash through the sound barrier*.

Supersonic flights could then be allowed over land.

It took NASA 10 years to get these groundbreaking photos. The T-38 aircraft are flying faster than the speed of sound. As they move through the air faster than sound they produce shockwaves, which these images have captured. Picture: AFP/NASA

The scientists could hardly believe their eyes when the images were developed.

“We never dreamt that it would be this clear, this beautiful,” said JT Heineck of NASA’s Ames Research Center in a statement.

Shockwaves are created by aircraft flying faster than the speed of sound. The shockwaves produced by aircraft merge* together as they travel through the atmosphere and are responsible for what is heard on the ground as a loud sonic boom.

NASA wants to design a quiet supersonic aircraft and these results will inform its plans to build its experimental X-59 QueSST quiet supersonic jet dubbed “the son of Concorde” which it began work on late last year. A drawing of what the Lockheed X-59 QueSST could look like. Picture: NASA

The photos were taken by advanced camera equipment on a plane that flew about 600m from the two T-38 jets as they flew less than 10m apart from each other.

“I am ecstatic about how these images turned out,” said Mr Heineck. 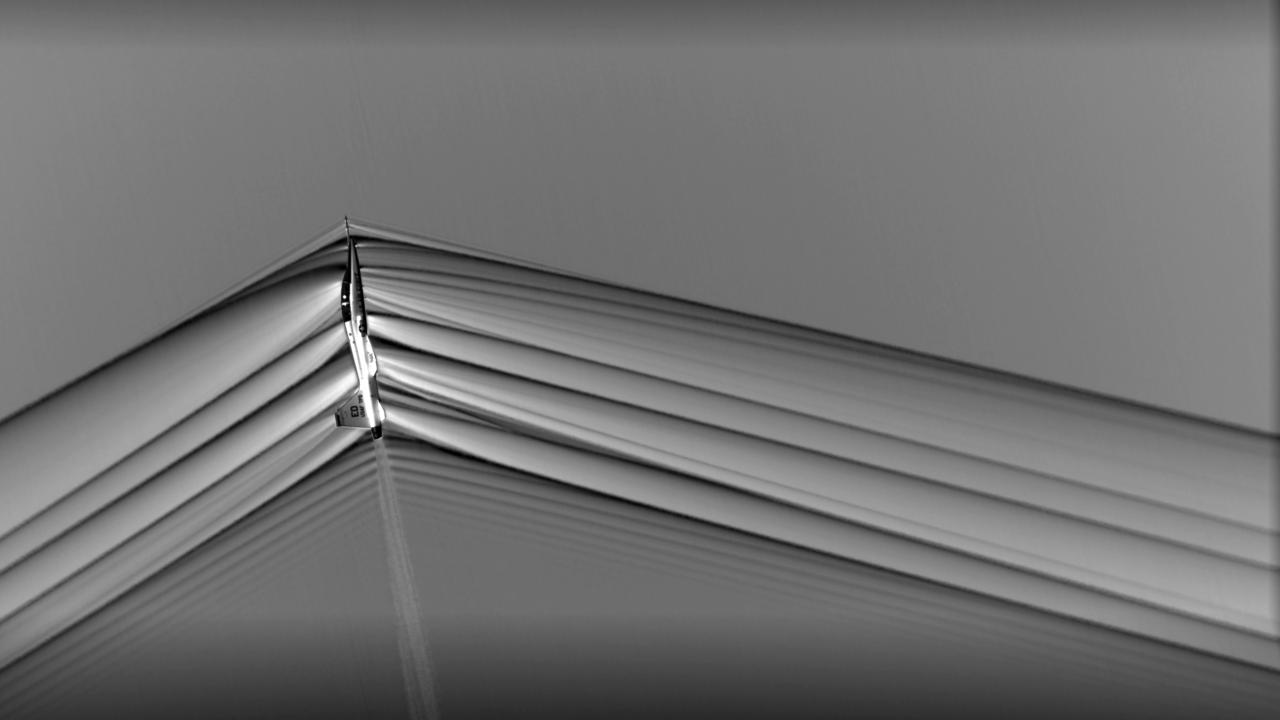 For the first time, the interaction of the shocks can be seen in flight, NASA said.

“What’s interesting is, if you look at the rear T-38, you see these shocks kind of interact in a curve,” said Neal Smith, a research engineer with AerospaceComputing Inc. at NASA’s Ames fluid mechanics laboratory.

“This is because the trailing T-38 is flying in the wake of the leading aircraft, so the shocks are going to be shaped differently. This data* is really going to help us advance our understanding of how these shocks interact.”

SOUND
Sound is a wave that moves, or vibrates, through air, water or other material. We hear sound when the waves or vibrations reach our ear. Sound is a wave that moves, or vibrates. We hear a sound when the wave reaches our ears.

CONCORDE
Concorde was a type of supersonic passenger jet that flew between 1976 and 2003.

They flew at Mach 2.04, which means just more than twice the speed of sound.

Flight time between New York, US and London, UK, was about three hours.

They were expensive to develop and run and very noisy because of the sonic boom.

Only 14 jets ever flew and they were never profitable. Concorde aircraft, which were the world’s first supersonic passenger aeroplanes.

CLASSROOM ACTIVITIES
1. Supersonic Travel
Supersonic jets that travel faster than the speed of sound could have a huge effect on the travel industry and the way people work and live.

Work with the person beside you. Divide a page up into a table of six sections. Your heading is:

SUPERSONIC TRAVEL — HOW WILL IT AFFECT THE FOLLOWING GROUPS

Label each of the six sections as:

airlines and other transport companies

holiday industry, including resorts and hotels

Brainstorm as many ideas as you can and fill in your table as you go.

2. Extension
Look carefully at the NASA images of the supersonic jets flying close to each other. What observations can you make about the patterns? Does anything else strike you?

How does the image of one jet differ to the ones with the two jets?

HAVE YOUR SAY: Would you fly on a supersonic jet?
No one-word answers. Use full sentences to explain your thinking. Comments will not show until approved by editors.