scouring* the depths of the ocean for never before seen creatures.

A group of Australian and international scientists have just returned from a trip to the abyss with a bounty of ocean adventure tales, including finding a faceless fish with no eyes.

Earlier this year, scientists from Museums Victoria, CSIRO and NESP Marine Biodiversity Hub explored what was going on 4000m below the surface and found new and rare species living off Australia’s eastern coast.

Scientists returned to land with around 500 specimens and here are some of the weird and wonderful finds:

• The Coffinfish which has a rodlike stem on its head topped with fluffy bait to catch prey,

• Giant anemone-sucking sea spiders, whose body simply is a “tube within a tube,”

• A blob fish with its soft, watery flesh, found 2.5km off the NSW coast, 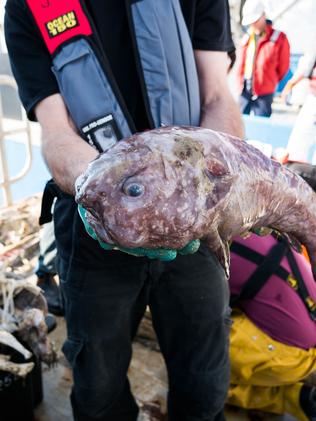 • A faceless fish without eyes and a smile scientists likened to Mona Lisa, which had rarely been seen for 140 years,

• Flesh-eating crustaceans, or amphipods, deep-sea scavengers that eat almost anything on the ocean floor,

• Zombie worms, or osedax; without mouths they use bacteria to digest and are often found burrowed* into the bones of decaying whales,

• A Dumbo octopus, which flaps earlike fins to glide through the water and

On Thursday night, an event called Voices from the Deep at the Melbourne Museum will allow the public to hear the scientists talk about their adventures and see footage of the trip from northern Tasmania to southern Queensland.

Senior curator* of marine invertebrates at Museums Victoria and chief scientist on the Sampling the Abyss voyage Dr Tim O’Hara said the team didn’t know what they would find.

“The idea of going somewhere for the very first time is extraordinary.

“This was the first voyage to explore the abyss, the deepest part of the ocean and the largest habitat on earth, off eastern Australia,” he said. “We didn’t know what to expect, and were constantly delighted by the animals we found and amazed by the rugged sea floor but we were dismayed by the rubbish we saw.

“Even kilometres below the sea surface, we get a glimpse* of the human impacts.”

Voyage finds will feature on the evening, including the deep sea coffinfish with bluish eyes and red feet.

Sea specimen will be on display at the museum until August 31.

For more information on the talk and the display visit the website: https://museumvictoria.com.au/melbournemuseum/whats-on/voices-from-the-deep/ Carefully read through the article on the deep sea finds and fill in the missing blanks from each line:

Mark the voyage on a simple map of Australia and mark the deepest part of the ocean where they did the exploring.

Draw some arrows off the map explaining the voyage and some of their finds.

Choose three of the creatures you find most interesting to research further.

Create a three minute PowerPoint or Google slides presentation about these creatures to share with your class.

Remove all text and add voice narrative to your presentation to make your slide show seem like a television documentary.

There is a lot of descriptive language in this article about the sea.
Draw a sketch of what you visualised while reading it.
List the words that help you create this picture in your mind.

If you were lucky enough to discover a new creature, what might it look like?
Describe it in detail.

FISHERMAN CAUGHT OUT BY SHARK

CAN EMUS FIX OUR DEFORMED LIMBS?