The pumice raft was visible as far as the eyes could see. Picture: ABC News

A city-sized floating island created by an erupting undersea volcano is heading for Australia.

It was discovered by Australian sailors as they made their way to Fiji.

It is so vast it can be tracked by satellite and is thought to cover about 150 sqkm, which is as big as Paris, France.

The island is made of pumice, which is formed by frothy lava coming into contact with water.

As lava cools it forms stone with lots of gas bubbles inside and that’s why pumice rocks float.

This pumice is thought to have spewed out of an erupting undersea volcano near Tonga in the South Pacific Ocean. Australian couple Michael Hoult and Larissa Brill sailed into the pumice raft by accident on their way to Fiji. Picture: Sail Surf Roam/Facebook

Queensland University of Technology geologist* Associate Professor Scott Bryan told ABC it “would have been a really eerie experience sailing into this sea of floating rock. No longer seeing water and hearing the scratching of the pumice against the hull*.”

Large gatherings of pumice rocks like this are called pumice rafts as the rocks come together to form one big, moving mass.

Although it isn’t the biggest pumice raft ever recorded, it is the biggest one observed in the world right now.

Australian couple Michael Hoult and Larissa Brill were the sailors who stumbled upon this raft.

They described what they saw as a “rubble slick* made up of rocks from marble to basketball size such that water was not visible.”

They added: “The waves were knocked back to almost calm and the boat was slowed to 1kt*.” The sailors have been working with Assoc Prof Bryan and other geologists by providing information, collecting samples and taking photos.

The pumice is likely to start washing up on Australia’s coastline in seven to 12 months and could bring with it lots of marine organisms that are now hitchhiking on the raft.

A slightly larger pumice raft arrived on the northern Great Barrier Reef in 2013 that formed from an undersea volcanic eruption off New Zealand.

That raft covered 20,000 sqkm but eventually spread over about 4 million sqkm as it broke up. 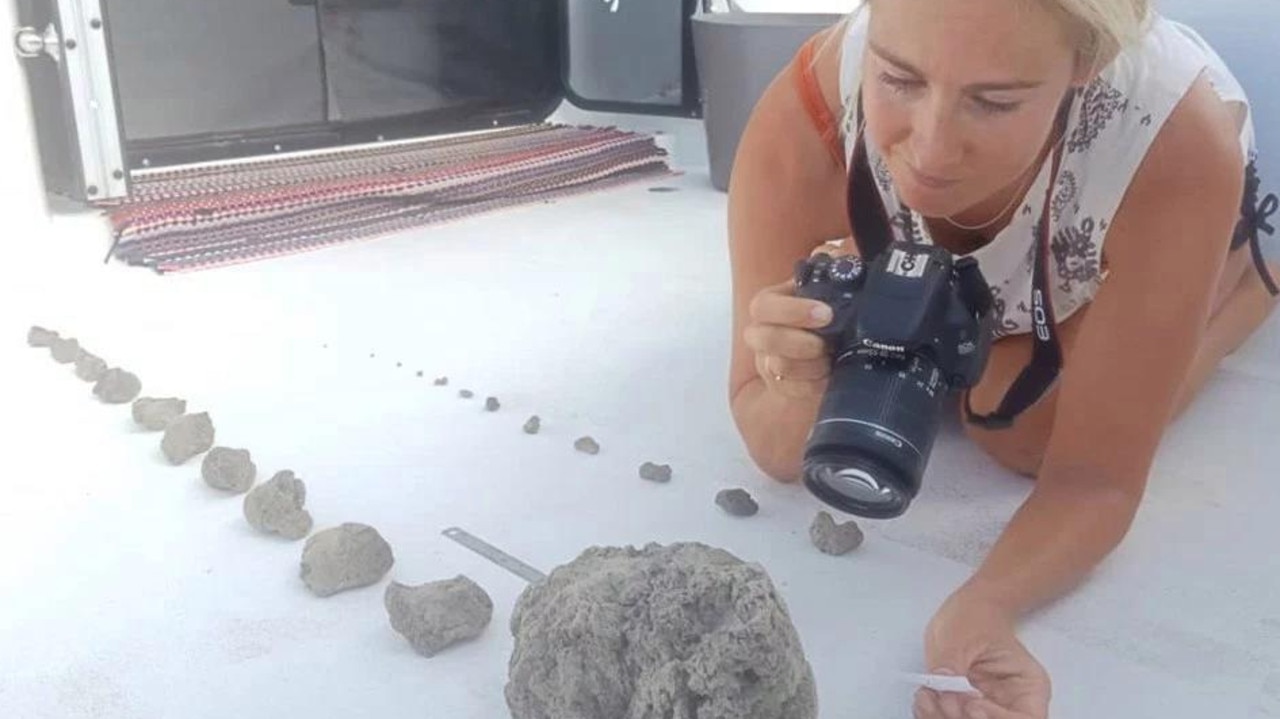 The sailors who discovered the raft have been helping scientists collect information about it. Picture: Sail Surf Roam/Facebook

LIFERAFT FOR THE REEF?
The giant raft of pumice could possibly help repair the Great Barrier Reef from its recent mass bleaching as it will bring with it countless marine creatures, including coral.

Assoc Prof Bryan explained to ABC: “In this 150-odd-square-kilometres of pumice out there right now, there’s probably billions to trillions of pieces of pumice all floating together and each piece of pumice is a vehicle for some marine organism.

“When it gets here, (the pumice raft will be) covered in a whole range of organisms of algae and barnacles and corals and crabs and snails and worms.

“We’re going to have millions of individual corals and lots of other organisms all coming in together with the potential of finding new homes along our coastline.” Fish swim near a staghorn coral that died from the effects of warm ocean temperatures and coral bleaching on Hastings Reef off Cairns, part of the Great Barrier Reef Marine Park. The photo was taken in April 2018. Picture: Brendan Radke

VOLCANOES AND PUMICE
Volcanoes are formed when a hot liquid called magma breaks through the Earth’s crust.

Once the magma reaches the surface and gushes into the air, this is known as a volcanic eruption.

Volcanoes normally give off warning signs before an eruption occurs, such as tremors or gases, which gives people nearby time to evacuate.

Underwater volcanoes create pumice when the hot lava comes into contact with water. It is rapidly cooled and depressurised*, creating a floating stone substance full of gas bubbles.

Some people use pieces of lightweight, pale grey pumice in the shower or bath to scrub dead skin off the soles of their feet. Mathijs on Mona Vale Beach, NSW in 2013 with pumice stones washed up after a volcanic eruption off in New Zealand.

COULD SANDY ISLAND BE A PUMICE RAFT?
Experts think mystery Sandy Island, which can be seen as a phantom island on Google Maps, could be explained by a pumice raft.

Sandy Island has been charted since 1774 as being located near New Caledonia in the South Pacific, but you won’t find it on Google Maps today.

Explorer Captain James Cook was the first to spot Sandy Island and it was reported by other sailors too and even added to maps.

However, the French Hydrographic Service removed the island from its nautical* charts in 1979.

But the true “undiscovery” came on November 22, 2012, when Australian scientists on the research ship Southern Surveyor failed to find Sandy Island. Experts believe Sandy Island may have been a floating pumice raft. Here’s an example of one near the Tonga Islands Picture: Jesse Allen/Wikimedia Commons/NASA

This article was first published in The Sun and reproduced here with permission.

CLASSROOM ACTIVITIES
1. Write a story
Write a story that starts with: ‘When the scientists told me I was sailing near a pumice raft, I did not know what they were talking about, so I asked them …”

2. Extension
In the story, Associate Professor Bryan said that the pumice rock could be used to help repair the Great Barrier Reef. Use the information in the story to create a diagram that will help another student understand how this could happen. You are not allowed to use any words, but your diagram should give lots of information.

VCOP ACTIVITY
Pumice raft to the rescue… or not?
The article called the cluster of rocks a ‘Liferaft for the Reef’ because of the marine life it could be transporting. But what if the marine life is not all friendly? We have quarantine laws for when people enter into the country, but what about for our waterways? Has anyone checked what marine life could be travelling on the raft? Could any of it be dangerous for the Great Barrier Reef- like the Northern Pacific Seastar in Tasmania.

What should we do to check to make sure the raft is safe?

What could happen if dangerous marine life or diseased organisms took up residence on the Great Barrier Reef?

Write a letter to the Australian Marine Conservation Society explaining your thoughts on the matter.

HAVE YOUR SAY: If you were sailing across an ocean, what strange or amazing thing would you like to see?
No one-word answers. Use full sentences to explain your thinking. No comments will be published until approved by editors.