Longer days and bacteria could be behind the oxygen we breathe 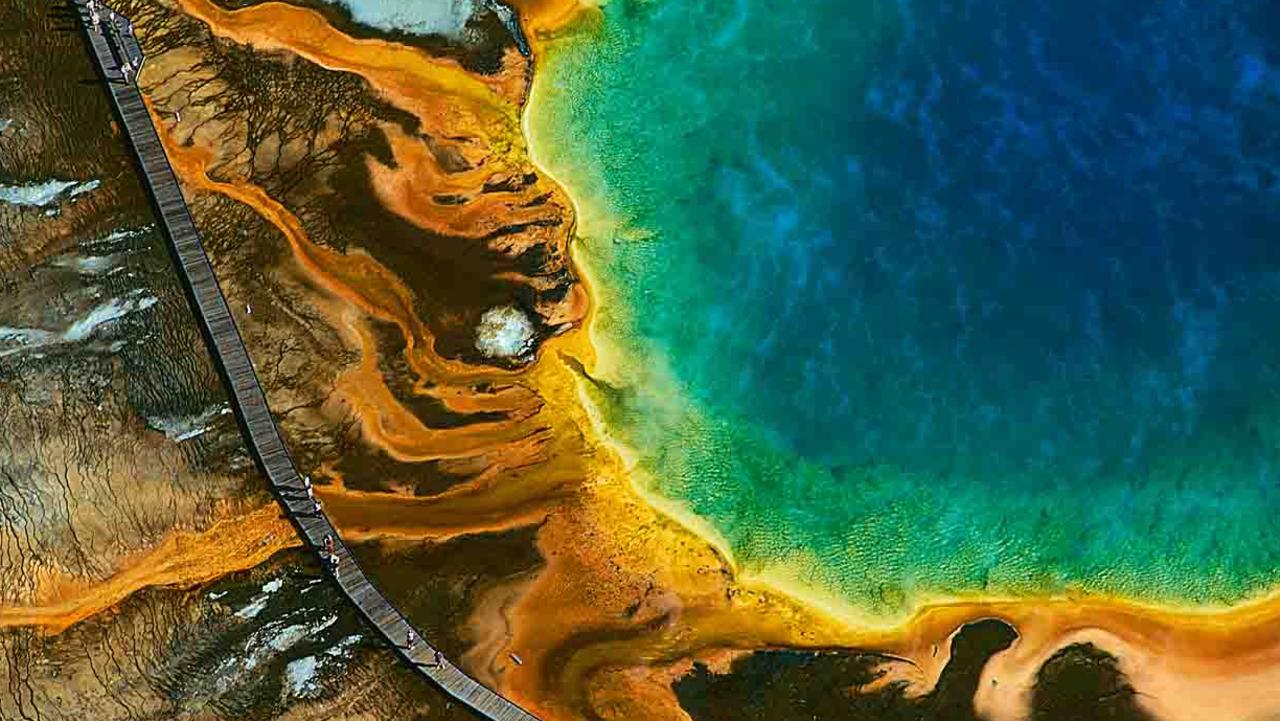 While the grand prismatic spring at Yellowstone National Park in the US was not the scene of the scientific study, this colour spectrum is caused by the presence of cyanobacteria, the type of bacteria that is the focus of the new oxygenation theory. Cyanobacteria also grow faster in the hot water at the centre of this basin at Yellowstone than at the periphery where the temperature is lower. Picture: file imagery.

Scientists have a new idea for how Earth got its oxygen*: they think it is because the planet slowed down and days got longer.

A new study suggests and tests the theory that longer, continuous daylight kickstarted weird bacteria* into producing lots of oxygen, making most of life as we know it possible.

They dredged up gooey purple bacteria from a deep sinkhole in Lake Huron in the US and played around with how much light it got in a series of lab experiments.

Researchers found that the more continuous light the smelly microbes* got, the more oxygen they produced.

One of the great mysteries in science is just how Earth went from a planet with minimal oxygen to having the breathable air we enjoy now. Scientists long figured microbes called cyanobacteria* were involved, but couldn’t tell what started the great oxygenation* event.

Researchers in the study published in Nature Geoscience this week propose that Earth’s slowing rotation, which gradually lengthened days from six hours to the current 24 hours, was key for the cyanobacteria in making the planet more breathable.

About 2.4 billion years ago, there was so little oxygen in Earth’s atmosphere that it could barely be measured, so no animal or plant life as we know it could have lived.

Instead, lots of microbes breathed in carbon dioxide, and in the case of cyanobacteria, produced oxygen in the earliest form of photosynthesis*. At first it wasn’t much, but in only about 400 million years, Earth’s atmosphere went to one-tenth the amount of oxygen we have now — a huge jump, said the study’s lead author, Dr Judith Klatt, a biogeochemist* at the Max Planck Institute in Germany. That oxygen burst allowed plants and animals to evolve and more plants joined the oxygen-making party, Dr Klatt said.

But why did the bacteria go on the oxygen-making bonanza in the first place? That’s where the University of Michigan in the US comes in. Oddly enough, it’s from this landlocked* base in the American Midwest that oceanographer* Dr Brian Arbic studies tidal forces on Earth and how they have slowed Earth’s rotation.

Dr Arbic was listening to a colleague’s lecture about cyanobacteria and he noticed that the oxygen event coincided with the timing of Earth’s days getting longer. The planet’s rotation slowed because of the complicated physics of tidal friction and interaction with the moon.

The American and German researchers put their theory to the test with bacteria similar to what would have been around 2.4 billion years ago.

They used purple and white mats of cyanobacteria living in an eerie world of a sinkhole nearly 24 metres deep in Michigan’s nearby Lake Huron.

“We actually imagine that the world looked kind of like the Middle Island sinkhole for most of its history,” Dr Klatt said.

Divers brought up the gelatinous* carpets of bacteria, which smell like rotten eggs. Klatt and colleagues exposed them to varying amounts of light for up to 26 hours straight. They found that more continuous light caused the microbes to produce more oxygen.

The study authors and other scientists said this is just one possible – but plausible* – explanation for Earth’s oxygen increase.

What makes the idea so impressive is that it doesn’t require any big biological changes in bacteria or the world’s oceans, said Professor Tim Lyons, a professor of biogeochemistry at the University of California, who wasn’t part of the research team.

A billion years on Earth in 40 seconds

CLASSROOM ACTIVITIES
1. Circular Flow Chart
Represent all the information you can on how the Earth became oxygenated in a visual diagram/flowchart. It could look like the example below or different if you wish.

It should be clear and easy to read and include all the information on what happened to allow oxygen on Earth and how living things began surviving and thriving. 2. Extension
How would a six hour day differ to the current 24 hour day in your life? What changes would need to be made to accommodate a much shorter day?!