Loch Ness monster not a dinosaur, could be a giant eel Scientists have made a major breakthrough in solving the mystery of the Loch* Ness monster.

Testing of DNA* left behind by living things in the water of the Scottish lake in the UK have ruled out Nessie being a dinosaur.

The creature could, instead, be a giant eel.

The scientists found much more eel DNA than they expected to, according to Professor Neil Gemmell, a geneticist* from New Zealand’s University of Otago. Professor Neil Gemmell with a beaker of water on the shores of Loch Ness, UK, after announcing the results of investigations into the environmental DNA present in Loch Ness on September 5. Picture: AFP

“Eels are very plentiful* in the loch system — every single sampling site that we went to pretty much had eels and the sheer* volume of it was a bit of a surprise,” Prof Gemmell said.

“We can’t exclude the possibility that there’s a giant eel in Loch Ness but we don’t know whether these samples we’ve collected are from a giant beast or just an ordinary one — so there’s still this element* of ‘we just don’t know.’”

Prof Gemmell noted that despite the idea of a giant eel having been around for decades, nobody had ever caught a giant one in the loch.

Loch Ness is the largest and, at 226.96m, the second deepest body of freshwater in the British Isles*. The use of eDNA sampling is already well established as a tool for monitoring marine life such as whales and sharks.

Whenever a creature moves through its environment, it leaves behind tiny fragments of DNA from skin, scales, feathers, fur, faeces* and urine*.

This DNA can be captured and then used to identify that creature by comparing it to large databases of known genetic sequences from hundreds of thousands of different living things. Professor Neil Gemmell (centre) takes samples on his boat as he conducts research into the DNA present in the waters of Loch Ness in 2018. Picture: AFP

MORE ON THE MONSTER
The first written record of a monster relates to the Irish monk St Columba, who is said to have banished a “water beast” to the depths of the River Ness in the 6th century, or 1500 years ago.

The most famous picture of Nessie, known as the “surgeon’s photo”, was taken in 1934 and showed a head on a long neck emerging from the water. It was revealed 60 years later to have been a hoax* that used a sea monster model attached to a toy submarine. This undated photo shows a shadowy shape that some people say is the Loch Ness monster. Picture: AP

Countless unsuccessful attempts to track down the monster have been made in the years since, notably in 2003 when the BBC paid for a big scientific search that used 600 sonar beams and satellite tracking to sweep the full length of the loch. Many have seen what they believed to be a monster over the years. Picture: Peter Jackson

The most recent attempt was three years ago when a hi-tech marine drone found a monster, though not the one it was looking for. The discovery turned out to be replica used in the 1970 film The Private Life of Sherlock Holmes, which sank nearly 50 years ago. 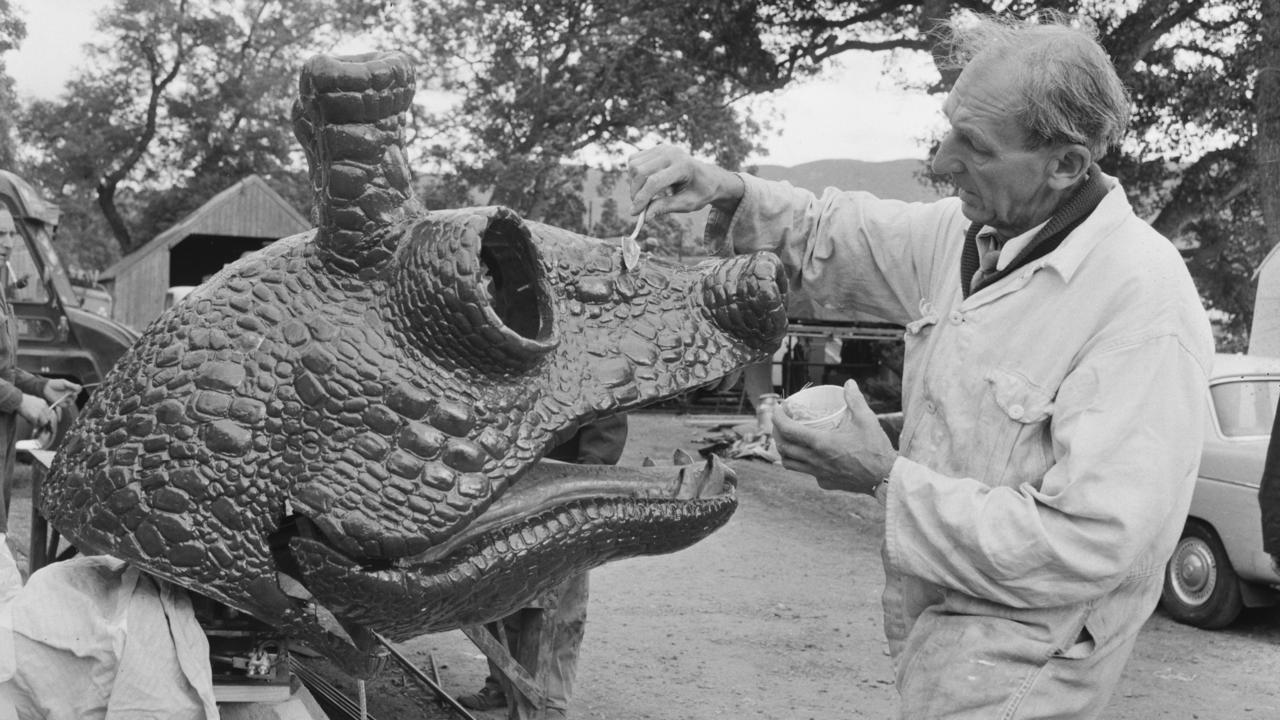 Tom Davies creates a fibreglass model of the Loch Ness monster for the film The Private Life of Sherlock Holmes beside Loch Ness. Picture: Getty Images

Some people have believed that the monster was an ancient, long-necked reptile called a plesiosaur.

2. Extension
Use your imagination for this activity.

What if the Loch Ness monster isn’t really a monster? What if Nessie is just in hiding because she’s heard everybody calling her a monster? Write a funny short story or rhyme about this.

HAVE YOUR SAY: What do you think the Loch Ness monster is?
No one-word answers. Use full sentences to explain your thinking. No comments will be published until approved by editors.