Human blood is warm, but cool too! 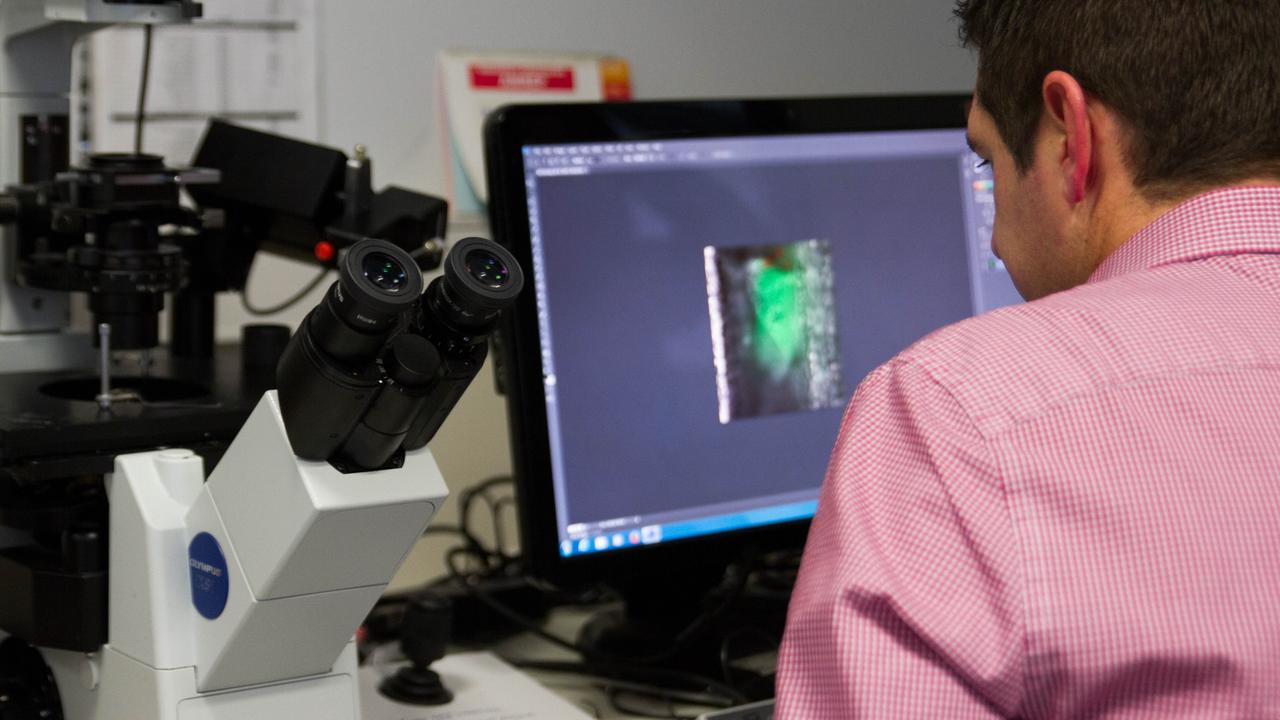 Associate Professor Justin Hamilton inspects a microscopic image of a blood clot as part of his work at the Australian Centre for Blood Diseases. Picture: supplied

We may be warm-blooded creatures, but human blood is pretty cool!

We’re celebrating National Science Week by taking a closer look at the approximately five litres of hardworking red blood pumping around a person’s body that gives us our get up and go.

The three main parts of blood work together something like an internal team of tradies, according to Associate Professor Justin Hamilton from the Australian Centre of Blood Diseases.

“You’ve got the red cells. They deliver oxygen and nutrients to the rest of your body, so they’re like the delivery system,” he said.

“You’ve got the white cells and they fight infection, so they’re like your personal bodyguard against viruses and bacteria.

“Then you’ve got the platelets, which are the blood clotting cells. They prevent you from bleeding, so they’re like the repairman.

“So you’ve got the delivery system and a bodyguard and a repair system all built in the blood.” Red blood cells are the delivery team in your blood.

Blood research has changed a lot, largely because improved technology allows researchers such as Assoc Prof Hamilton to see things much more clearly and easily now.

“With high-powered microscopy*, we can look at what the cells are doing when they’re doing their jobs, and follow them around with microscopes much better than we used to,” he said.

Blood tests today are also so quick and simple it’s easy to forget how impressive they are, revealing everything from high cholesterol levels to foetal* genetic disorders.

“Because blood is easy to get from people … it’s a great place to try and identify biomarkers* of health or disease,” Assoc Prof Hamilton said.

“These biomarkers are usually proteins … in the blood that signal that a particular disease process is going on, so (a blood test) is a great way to be able to test for that relatively quickly and easily.” Blood tests are a straightforward way of checking whether you’re healthy.

Ongoing blood supply is vital for treating patients of all ages across a huge spectrum* of treatment — but blood donation has only been around for a century.

“The very first successful transfusion* of blood was performed in 1818. That was from somebody giving blood from their arm, directly into a patient,” she said.

“They didn’t understand about blood group compatibility*, so that was a dangerous thing to do.”

Dr Gould said it wasn’t until 1900 that the three main blood groups were discovered. From there, the need to match various blood groups was confirmed, which was a major leap forward.

However, there was still no way of storing blood, which would clot shortly after leaving the donor. It wasn’t until 1916 that a solution was found, kicking off blood banking just in time for World War I.

“War and medicine tend to go together,” Dr Gould said. “Australia’s first blood transfusions started in Victoria in 1929. It was run by Dr Lucy Bryce (and) a lot of women ended up running it during World War II.

“It grew phenomenally. While the men were away at war, the women doctors, nurses and laboratory technicians grew this blood service from a tiny little thing into thousands of donations a year.”

Now blood can be frozen, stored and shipped. The Australian Red Cross Lifeblood team has been supplying deep frozen red cells, platelets and plasma to the Australian Defence Force for use overseas.

The same storing method will potentially revolutionise supply in rural and regional Australia as well, with deep frozen platelets lasting a couple of years instead of just seven days.

“From needing a live person right by your bedside, we’re now testing deep frozen platelets that could (originate) in Tasmania, for instance, and be shipped up to Darwin,” Dr Gould said.

“But the thing I love most is that our blood is red because it’s got iron in it from exploding stars.

“When a dying star shrinks, collapses and explodes, it scatters all its elements as dust across the universe and that’s where our iron comes from. On our planet, we’ve evolved to pick up that stardust and turn it into something that supports life.” Human blood is red because it has the element iron in it.

DID YOU KNOW?
Here are some of Associate Professor Justin Hamilton’s and Dr Alison Gould’s favourite facts. Bags of plasma, one of the blood products that will be required by one in three people in their lifetime. Picture: Australian Red Cross Lifeblood

A, B and O missing from signs

CLASSROOM ACTIVITIES
1. What’s Your Top Five?
What are your top-five interesting facts about blood in today’s story? List them in order (Number one being the most interesting.) Next to each fact, write a sentence explaining the reason why you chose that fact and why you put it in that order.

Rule: you can’t use any of the facts in “Did You Know?”

2. Extension
Associate Professor Hamilton said: “The three main parts of blood work together something like an internal team of tradies.”

Imagine that you are the “tradie” responsible for one of the main parts of blood. Write a description of a typical day doing your job. Add drawings or pictures to help your description.

HAVE YOUR SAY: Would you like to donate blood when you grow up?
No one-word answers. Use full sentences to explain your thinking. No comments will be published until approved by editors.