Ever wondered what it would be like to unplug from the world and hide away in a dark cave for 40 days?

Fifteen people did just that for a scientific experiment in a Lombrives cave in southwestern France.

After camping without clocks and light, they emerged* saying time passed differently underground.

With big smiles lighting up their pale faces, the 15 volunteers left the cave wearing special glasses to protect their eyes after so long in the dark.

“It was like pressing pause,” said 33-year-old Marina Lançon, one of seven female members in the experiment, adding she didn’t feel in a rush to do anything.

While she said she could have stayed in the cave a few days longer, Lançon said she was happy to feel the wind on her face and hear the birds sing in the trees. And she doesn’t plan to open her smartphone for a few more days to delay the return to normal life.

For 40 days and 40 nights, the group lived in and explored the cave as part of the Deep Time project.

There was no sunlight, the temperature was just 10 degrees and the relative humidity* stood at 100 per cent. The cave dwellers had no contact with the outside world, no updates on the COVID-19 pandemic and no communication with friends and family. 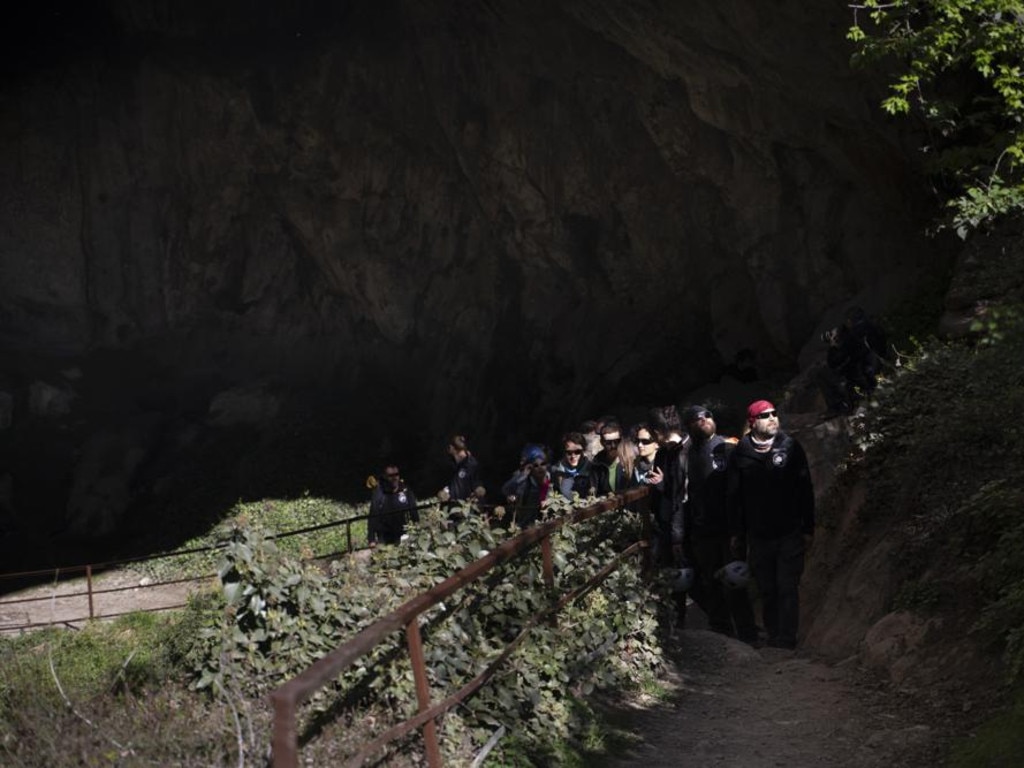 After 40 days in voluntary isolation, the 15 participants emerged. While inside the cave, they had no clocks, no sunlight and no contact with the world above. Picture: AP Photo/Renata Brito.

Scientists leading the project said the experiment would help them better understand how people adapt to drastic* changes in living conditions and environments.

For one, those in the cave lost their sense of time.

“And here we are! We just left after 40 days … For us it was a real surprise,” said project director Christian Clot. “In our heads, we had walked into the cave 30 days ago.”

At least one team member estimated the time underground at 23 days.

Johan Francois, 37, a maths teacher and sailing instructor, ran 10km circles in the cave to stay fit. He sometimes had “visceral* urges” to leave.

Without daily commitments and children, the challenge was “to profit from the present moment without ever thinking about what will happen in one hour, in two hours,” he said.

Working with labs in France and Switzerland, scientists monitored the 15 members’ sleep patterns, social interactions and behaviour via sensors that sent data to computers.

Those in the cave followed their biological clocks to know when to wake up, go to sleep and eat. They counted their days in sleep cycles instead of hours. Members of the French team that participated in the ‘Deep Time’ French study celebrate as they emerge from the Lombrives cave after 40 days underground. Picture: AP Photo/Renata Brito.

The day before their departure, scientists monitoring the participants entered the cave to let the research subjects know they would be leaving soon.

“It’s really interesting to observe how this group synchronises* themselves,” Clot said while inside the cave.

Working together and organising tasks without being able to set times was especially challenging, he said.

Although participants looked tired when they came out, two-thirds said they wanted to remain underground a bit longer to finish group projects started inside, according to Benoit Mauvieux, a chronobiologist involved in the research.

‘Lunar ark’ plan to store species’ DNA on the moon

What was the name of the cave and where was it?

How many days were the volunteers in the cave?

How long did some participants think they had been in the cave?

What did scientists monitor and how?

What proportion of participants wanted to stay underground?

CLASSROOM ACTIVITIES
1. Cave People
Unplugging from the world in this deep cave experiment would have lots of flow-on effects on both mind and body, which is what the project wants to research.

Work with a classmate to create a table in quadrants on how unplugging from the world and living in a cave would impact your mind and body.

In the top left quadrant, list physical effects on the body.

Directly below that, list aspects of mind and body could have improved while being ‘unplugged’.

In the top right quadrant, list mental effects on the mind.

Directly below that, list aspects of mind and body may have deteriorated or suffered while being ‘unplugged’.

2. Extension
For the 15 people that took part in this deep cave experiment in France, what aspects of their life may change after completing the experiment?

What less severe ways could you suggest to give our mind and bodies a break every so often to ‘unplug’ from the world?