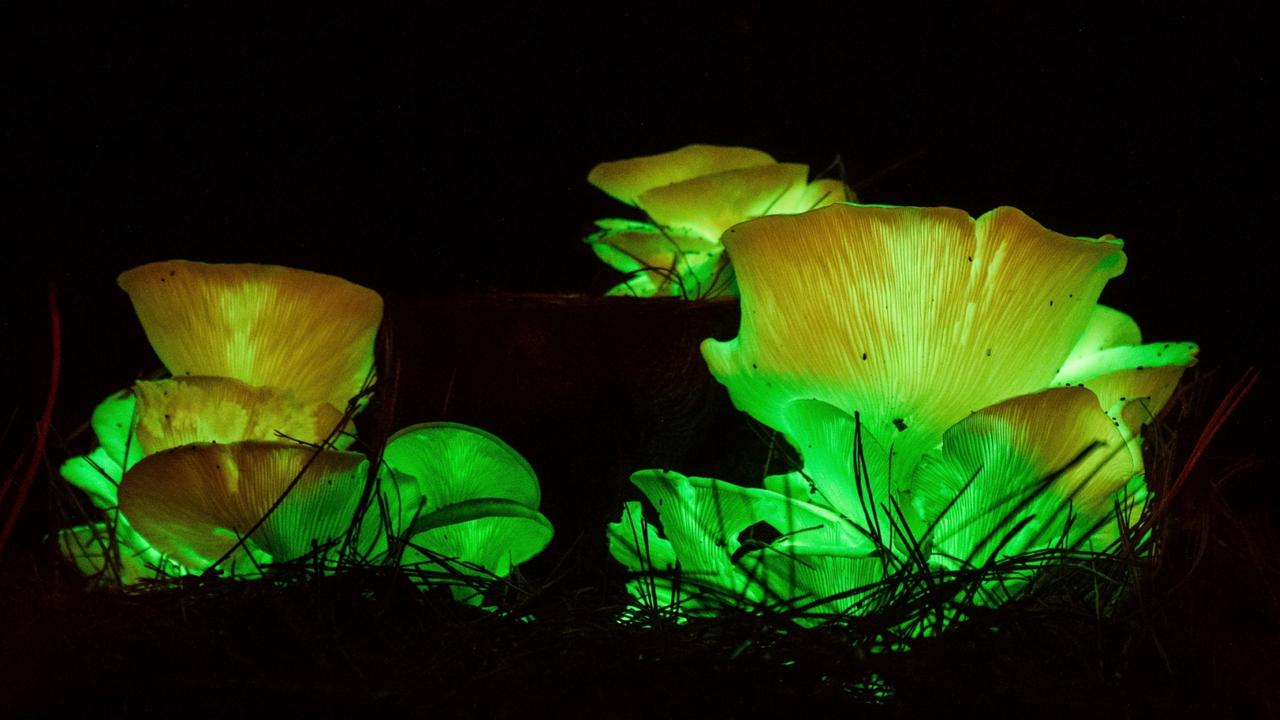 These amazing mushrooms light up the night.

They are so bright you could read a book by their light.

The fungus, which is native to Australia, is called Omphalotus nidiformis. It glows brightly when the natural chemicals in the fungus come into contact with oxygen* in the air.

It’s such an amazing sight that last year thousands of people visited a forest in South Australia that’s been named Ghost Mushroom Lane.

“If you go at the right time and under the right conditions — not a full moon and when they’re out, quite fresh — yes you honestly can read with them, but as they wilt* it becomes a bit more difficult,” Mr Horn said. The chemicals that cause the glow are called enzymes and are poisonous to eat, causing cramps and vomiting. They are not harmful if you accidentally touch them.

This natural glow is even more amazing because there are so many mushrooms close together in this forest.

“We’re talking tens of thousands of these type of mushrooms,” Mr Horn said.

“It’s pretty amazing, we think it’s the biggest site of its type in the country.”

More than 18,500 people visited Ghost Mushroom Lane in the South East pine forest near Mount Gambier in South Australia last year. Forestry South Australia is inviting people to visit in May and June this year.

The 60ha glowing forest was open to the public for fungi-spotting night visits for the first time last year. Photographer and nature lover Ockert le Roux showed forestry workers his photographs of the fungi and suggested other people would like to see them.

Ghost mushrooms grow throughout Australia on decaying* plant material, such as stumps left after pine tree harvest. They first grow in late autumn following good rain and continue appearing into winter, reaching up to 20cm wide. Last year Mr Horn took his daughter to an area where the mushrooms are particularly dense*, known as Green Lantern Gully.

“We just stood in the middle of this whole area and every single stump that was there had glowing mushrooms on it,” he said.

“You could see the yellow-green colour you see in the photos, we just sat in the middle and said ‘Wow’.”

Ghost mushrooms grow in Victoria, Tasmania, NSW and southern parts of Western Australian and South Australia. Many grow in the Blue Mountains in NSW.

They usually grows on tree trunks and stumps and are easy to spot in pine forests, as there is less undergrowth such as bushes and grass.

Read through the article carefully and find as many facts as you can about Omphalotus nidiformis mushrooms. Use these facts to create an information leaflet about them. Include a paragraph about how, where and when they grow, their special features and the best places and times of the year to see them. Also include any warnings to visitors as needed. Draw a picture to go with the information.

Extension: Find out about another type of mushroom. How does this mushroom compare to the Ghost mushroom? For example you may choose ‘button mushrooms’ that are commonly used for eating.

Create an advertising poster to let people know about these mushrooms. Include what they are, where and when they can be found and what kind of experience it will be. Make the experience sound as unique an eciting as possible.

Extension: Use the letters from ‘Ghost Mushroom to write an acrostic poem describing these unique mushrooms. You can use words or short phrases but each line must begin with the letter from the name and be about the mushrooms. If you are feeling particularly adventurous you may like to use the scientific name Omphalotus nidiformis to write your acrostic poem.

An example of an acrostic poem is as follows.

Glowing brilliantly in the distance
Helping guide the way
Omphalotus nidiformis they are called
Spectacular I hear you say!
etc…

With a partner see if you can you identify all the doing words/verbs in this text.

Highlight them in yellow and then make a list of them all down your page.

Now see if you and your partner can come up with a synonym for the chosen verb.

Make sure it still makes sense in story.