A statue reconstruction of a young female Denisovan based on a skeletal profile reconstructed from ancient DNA. Picture: Hebrew University via AP

Scientists have reconstructed the skull of a prehistoric, extinct cousin of humans, so we can see, for the first time, what these people looked like.

To recreate the skull and other parts of the skeleton of a Denisovan, the scientists in Israel used the DNA* found in a tiny pinky-finger bone of a 13-year-old girl who lived 70,000 years ago. 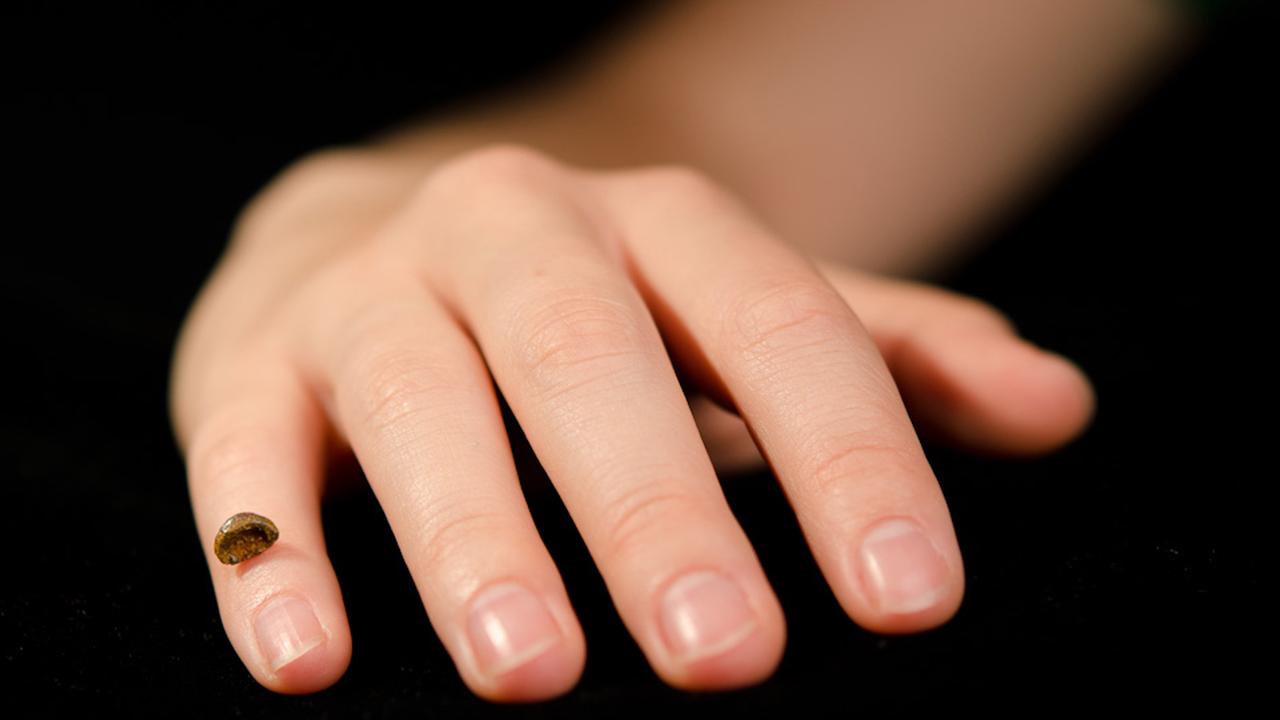 The reconstruction of the skull and skeleton of the Denisovan girl was based on this tiny piece of pinky finger bone, seen here sitting on the hand of a modern human.

Little is known about the Denisovans and their existence was only recently discovered. Modern people did not evolve from Denisovans or Neanderthals, although our species, Homo sapiens, interbred* with both.

Today, all we have of this species is three teeth, the pinky bone and a lower jaw, said genetics professor Lian Carmel from Hebrew University. Israel.

Prof Carmel said that was enough to create a model of a full Denisovan skeleton.

“This is the first time that we provide a detailed anatomical* reconstruction showing us what these humans looked like,” he said.

It turns out, Prof Carmel said, “we are all very similar.” Liran Carmel of the Hebrew University speaks to journalists before revealing a 3D-printed model of the face of a Denisovan. Picture: AFP Liran Carmel reveals the 3D-printed model of the face of a Denisovan. Picture: AFP

His team developed a technology to understand the ancient DNA and, more importantly, how the genes* on that DNA acted. Gene activity, for example, differentiates between a frog and a tadpole, even though their DNA is identical, he said.

DNA could indicate the Denisovan’s dark skin, eyes and hair, Prof Carmel said, but by mapping gene activity patterns, they could understand how the species stood out anatomically from modern humans or Neanderthals. They identified 56 traits*, most in the skull, that differed.

This helped them produce a rendering* — claiming 85 per cent accuracy — of a Denisovan skeleton that at first glance looks like it could be from a modern human, though differences are obvious on closer inspection.

There were similarities to Neanderthals — a sloping forehead, long face and large pelvis* — but the Denisovans were also unique in their very wide skull and large dental arch.

The skeletal reconstruction, along with an artist’s rendering of the 13-year-old girl’s head and face, were published in the journal Cell. A preliminary portrait of a young female Denisovan. Picture: Hebrew University via AP

The team repeated the process as a test with Neanderthals and chimpanzees, whose anatomies are known, and found the reconstruction to be 85 per cent accurate. The discovery of more Denisovan DNA would further improve the reconstruction.

Bence Viola of the University of Toronto, Canada, who studies Denisovan fossils, called the work “a huge step forward … This would have been called science fiction five years ago.”

Research suggests that Denisovan DNA may have contributed to modern Tibetans’ ability to live in high altitudes and the Inuits’ ability to withstand freezing temperatures. Another portrait of a young female Denisovan based on the skeletal profile reconstructed from ancient DNA. Picture: Hebrew University via AP

CLASSROOM ACTIVITIES
1. Fact tennis
Work with a partner to play a game of “fact tennis” about this news article. Take turns to state a fact that you have learnt from the story. You cannot repeat a fact your partner has already said. The winner is the last person to state a fact. (That is, the game ends when one player can no longer think of a new fact to say.)

If you want, you can keep a tally of how many facts you and your partner state altogether, and compare this with other pairs in your class to find a Grand Champion team.

2. Extension
With your partner, think of some questions that this article has raised for you — what has it left you wondering? Choose one question to investigate further. See what you can find out.

HAVE YOUR SAY: What extinct species would you like to reconstruct to see what it looked like?
No one-word answers. Use full sentences to explain your thinking. No comments will be published until approved by editors.