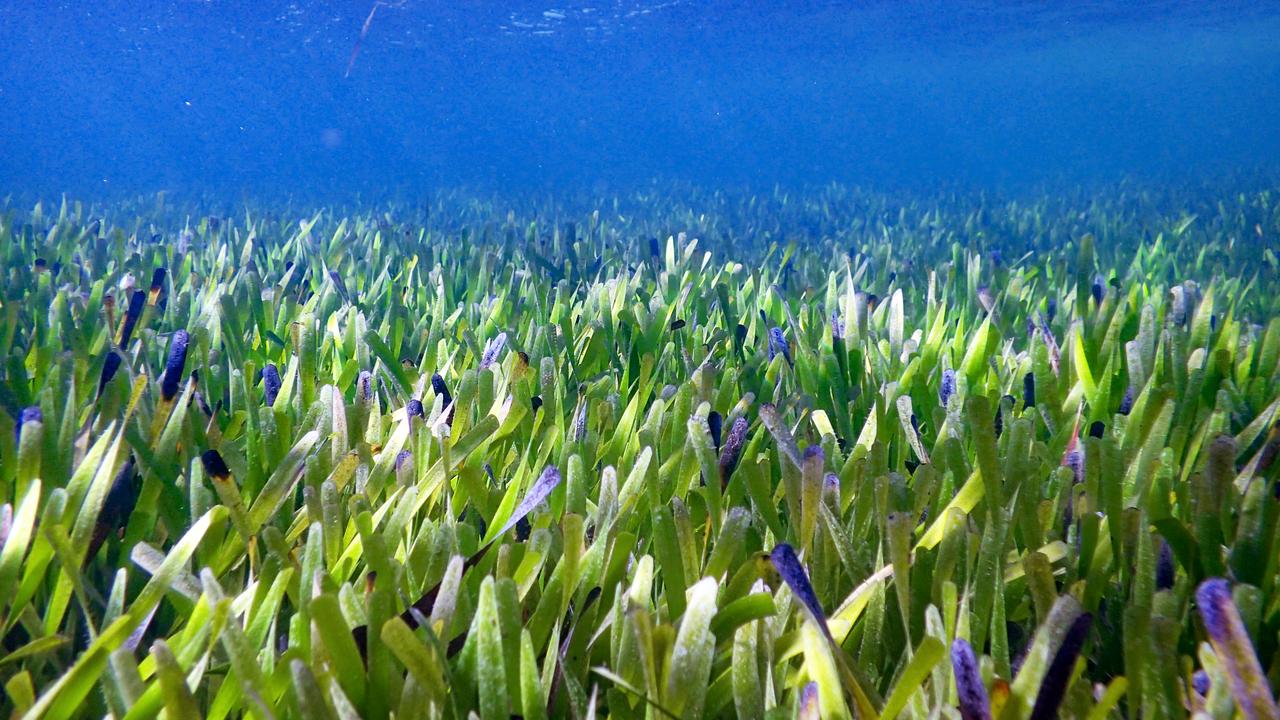 Australian researchers have discovered that the seagrass Posidonia australis in the shallows of WA’s Shark Bay is the largest plant on Earth. Picture: University of Western Australia

The ancient and enormous seagrass plant is in World Heritage-listed* Shark Bay, off the Western Australian coast.

It stretches 180km across, covers about 200sq km of the shallow seabed* and is thought to be at least 4500 years old.

The team of scientists from the University of Western Australia (UWA) and Flinders University were studying Shark Bay Posidonia australis seagrass to learn about the genetic* diversity* across that plant population, or how different or similar individual plants were to each other.

Knowing this would help experts decide which plants would be good to collect and transplant* in other places to help repair damaged seagrass meadows*.

“We often get asked how many different plants are growing in seagrass meadows and this time we used genetic tools to answer it,” said UWA evolutionary* biologist* Dr Elizabeth Sinclair, who was part of the research team. 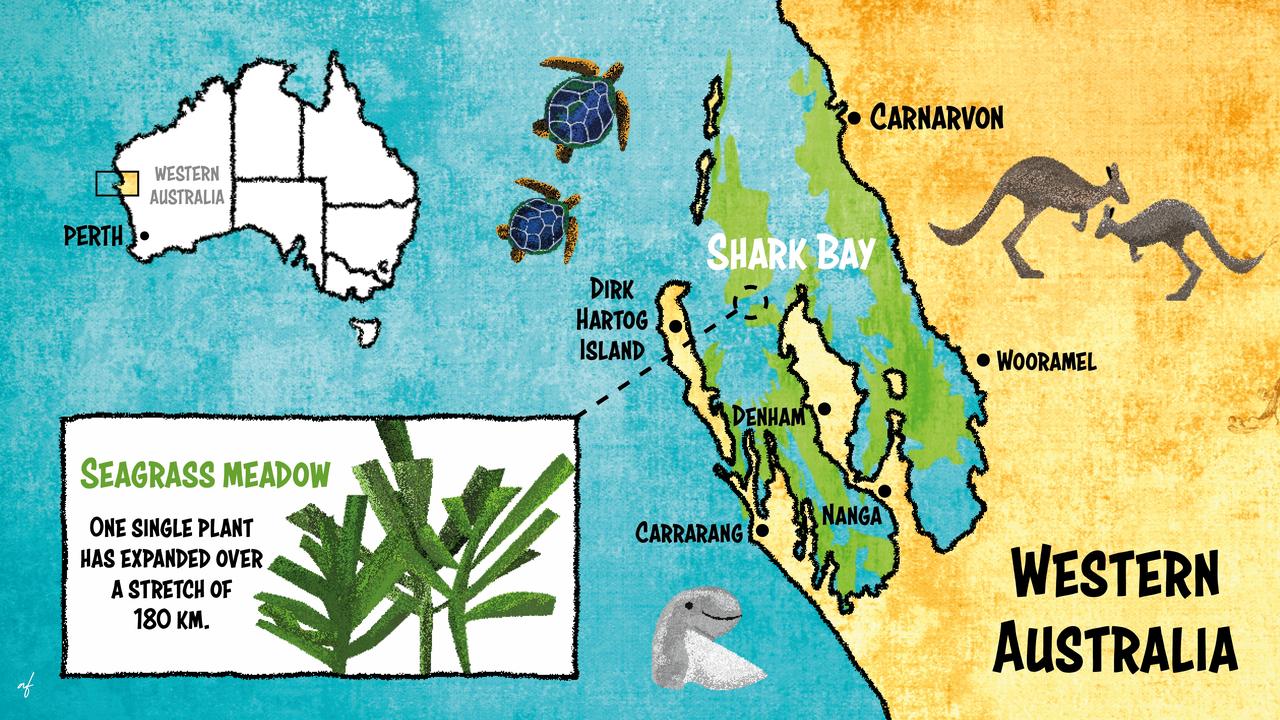 This map of Western Australia shows the location and spread of the seagrass. Picture: Abi Fraser

UWA marine* biologist and seagrass expert Jane Edgeloe said the team took samples from seagrass shoots across Shark Bay with the goal of building a complex* genetic picture or map of each plant, like a fingerprint.

But to the scientists’ surprise, the tests revealed the seagrass was actually one gigantic plant.

“The answer blew us away – there was just one!” Ms Edgeloe said.

“That’s it, just one plant has expanded over 180km in Shark Bay, making it the largest known plant on Earth.”

Seagrass in Shark Bay has to withstand* big variations in conditions. Water temperature can vary from 17C to 30C, some areas are dark while others are in bright sunlight and salinity – how salty the water is – varies from normal to double that saltiness. 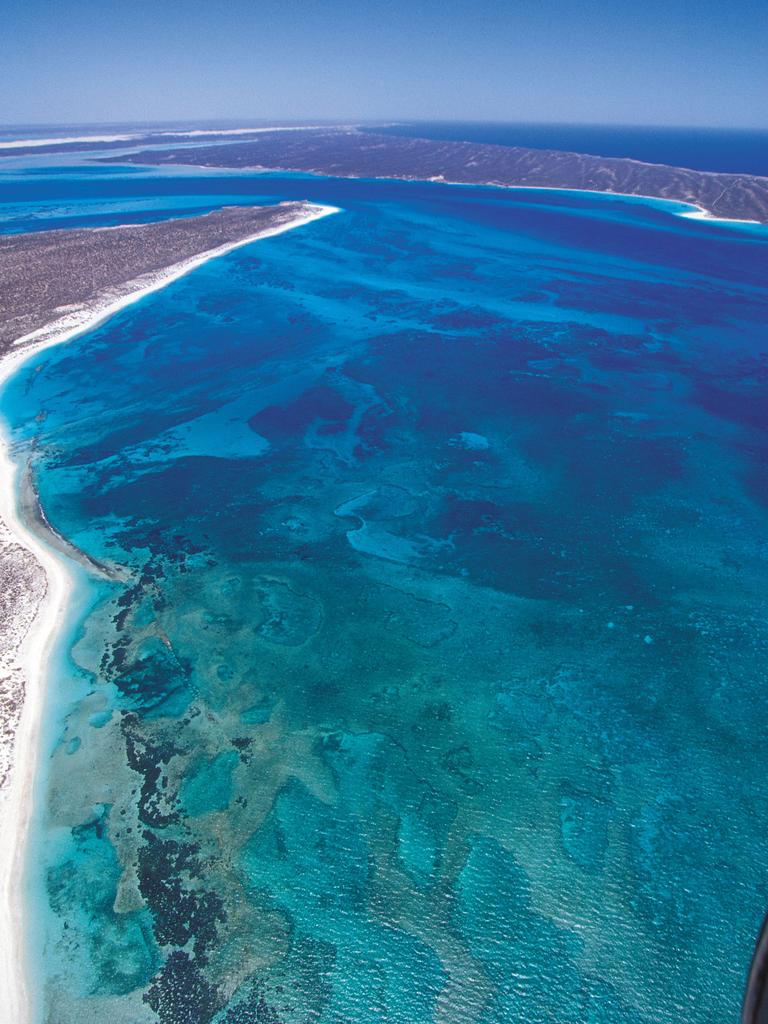 An aerial view of the south passage of Shark Bay, near the town of Denham in Western Australia. Picture: Australia’s Coral Coast

Scientists expected that the genetic diversity of different plants was what allowed the seagrass to cope with the varying conditions. Instead, Dr Breed said, the one plant may have slight genetic differences across its habitat*.

The seagrass plant is actually a special type of clone* called a polyploid.

In most species of animals and plants, including other seagrass plants, each parent contributes half its genetic material to its offspring*. A polyploid clone has multiple sets of the same genetic material.

The fact it has so much genetic material may explain its success coping with the varying conditions.

There are now experiments set up across Shark Bay to understand more about this giant plant.

The research results are published in the journal Proceedings of the Royal Society B.

Shark Bay is important for its seagrass, for the dugong that graze on the seagrass and for the ancient algae colonies that form domes called stromalites. It is also home to five endangered mammal species. Dugongs graze on the seagrass in Shark Bay, Western Australia.

The seagrass in Shark Bay has been able to grow so large because it has been undisturbed for thousands of years.

Scientists at Edith Cowan University are mapping Australia’s seagrass meadows to help understand the risks for their survival and how best to protect them. The record-breaking rains on the east coast of Australia this year, for example, could be very damaging for seagrass, which needs light to survive. Mud washed into the sea blocks out sunlight, slowing seagrass growth or killing the plants.

CLASSROOM ACTIVITIES
1. Below the surface
Draw a picture showing what you would see under the surface of the water at Shark Bay. Include as much detail as possible based on the information given in the news story. Add labels and captions to provide key details.

2. Extension
Use a physical or online map to find your current location. Then, find another location that you are familiar with (for example, a family holiday spot or where a relative lives) that is around 180km away, to give yourself a better idea of just how far the seagrass plant has spread.