Kayakers on the Murray River as part of the Helping the Murray Sing project. Picture: Jason Macqueen

The sounds of Australia’s mighty Murray River will soon be heard in song.

Australian National University scientists and audio specialists teamed up to travel the length of the famous river by kayak, starting in the alps in Kosciuszko National Park in southeast NSW and ending at the coast in Goolway in South Australia.

They captured the river’s sights and sounds and now plan to turn important data* about the river into audio*.

ANU researcher Meredith Hope said the Helping the River Sing project hoped to “give the Murray a voice” and improve its health.

“The Murray-Darling system* is the lifeblood* for millions of Australians,” she said.

“It provides water to drink and grow food, provides transport and, of course supports thousands of species* in diverse* ecosystems*.

“But the health of the Murray River remains under pressure despite efforts to improve it.

“So to address this, our research team have been recording the river as they travel from source to sea over two-and-half months. And the sounds and sights we have captured are a powerful expression of the river’s health.” 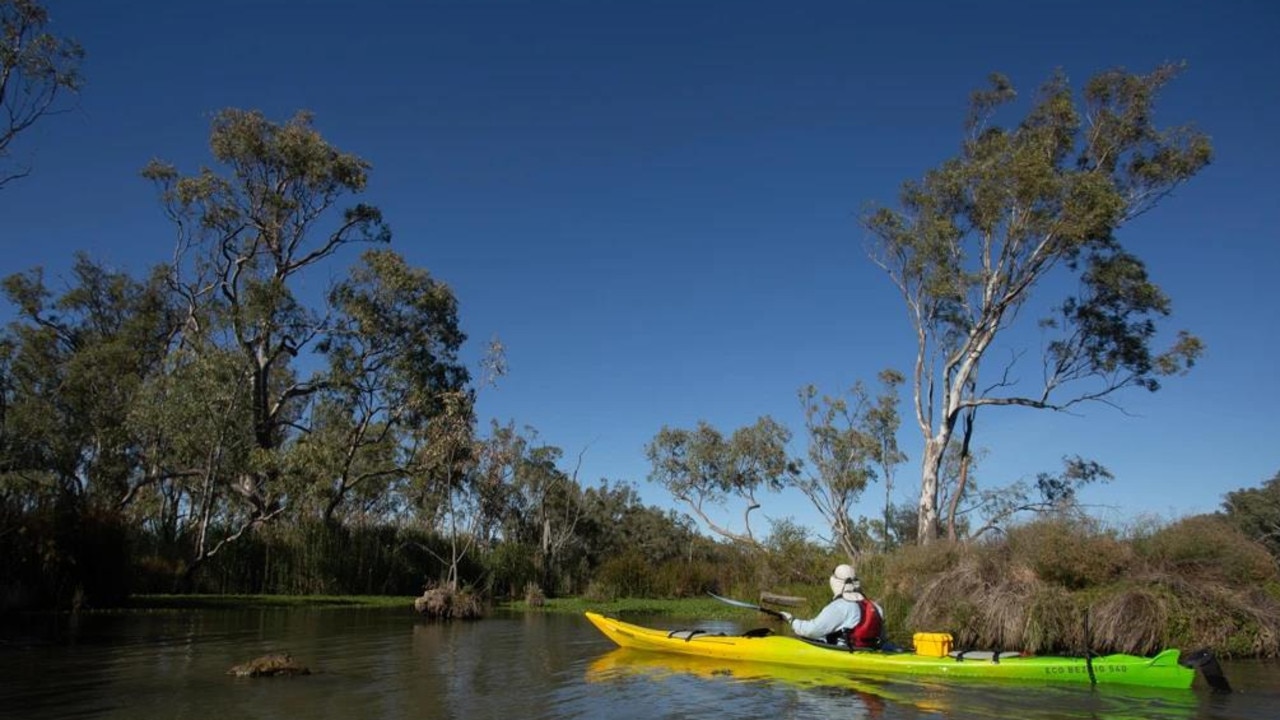 Xavier Anderson was among the team that kayaked down the Murray River as part of the Helping the Murray Sing project. Picture: ANU

Honours student Xavier Anderson, who paddled a kayak 2500km along the entire river for the project in February, said the team collected data such as flow rate, water temperature, salinity and even the murkiness of the water. The team is now assigning a different tone to each data point and turning it into sound.

“Each point along the river will have a different sound and we are going to turn that into a composition* so everyone can hear the different sounds,” he said.

The ANU School of Music is writing the soundtrack and plans to have a choir record it.

Mr Anderson said listeners should expect to hear many sounds, including the sound of silence.

He said watching the birdlife, including pelicans in the morning and at night, was almost deafening at times, but said the Murray River also had its quiet spots.

“The diversity of the landscape along the Murry is amazing. You can even hear what happens when different rivers do or don’t come in to the Murray,” he said.

He urged every Australian child to visit the Murray in multiple locations.

“See as much of it as you can, not just in one spot. The river has a lot of different faces along the way. You want to see them all.”

CLASSROOM ACTIVITIES
1. Create an advertisement
You are tasked with the job of creating the advertising for the opening performance of the composition created from this research. Create a brochure that invites people to the event (assuming that social distancing measures have been reduced). Include the name of the composition, an explanation of the significance of the music, pictures of the Murray River, who it is performed by and who it was created by and where/when it will be performed.

2. Extension
What does your house sound like (or if you are completing this at school – your classroom)?
Sit quietly for 5 minutes at 3 or 4 different times of the day and listen to the sound of your house (or classroom).
Is it loud, quiet, calm or busy? How does it make you feel? Does the feeling remain the same at all times of the day? What noises can you hear?

Write a poem using onomatopoeia (words that represent sounds) to create the ‘song of your house’ (or classroom)
For eg:

HAVE YOUR SAY: Would you like to kayak down the Murray River? Why?
No one-word answers. Use full sentences to explain your thinking. No comments will show until approved by editors.